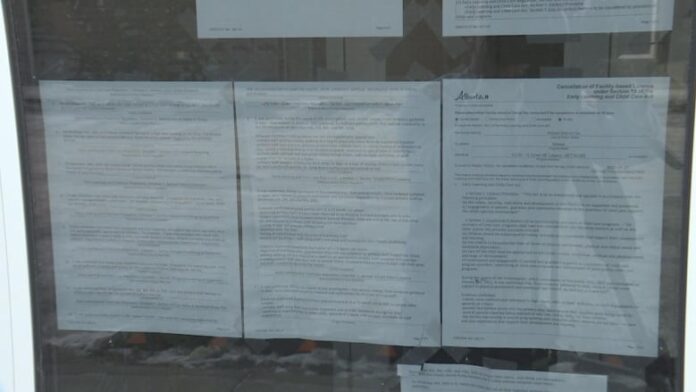 A northeast Calgary daycare was closed last week following a provincial investigation that alleged kids at that facility had been “subject to physical punishment and emotional deprivation” by multiple primary staff.

Officials say the probe began after a complaint was received Dec. 12. The complainant alleged a 12-month-old child had been physically harmed three days earlier at Kidzee Early Learning and Childcare, a Calgary-based childcare business.

As a result of the investigation, Alberta Children’s Services said it had issued a 15-day notice for the cancellation of the facility’s licence. Parents were advised the facility was closing and officers were there to ensure the program remained closed.

In a statement, Calgary police confirmed its child abuse unit was investigating allegations of physical abuse that allegedly occurred at the facility.

According to a government notice posted on the front door of the facility, the investigation began Dec. 12 and continued until last week, identifying 12 non-compliance concerns.

Five staff members were alleged to have physically punished children and to have subjected them to emotional deprivation.

Officials said they confirmed those incidents via video on Dec. 12 and 13. They immediately ordered that the five members could not be on the premises during operational hours or be involved in child care at the facility for the duration of the investigation, or until further notice.

The notice alleges a 12-month-old child had suffered multiple instances of physical punishment, including:

In addition, the notice alleges emotional deprivation of the same child, including instances where the child sought out attention and affection from staff, who the document alleges “completely ignored” the child.

Other children at the facility, the document alleges, were confined and restrained in high chairs with no food, activities or staff engagement for more than two hours. Several kids were also subject to “physical child guidance” that was not acceptable, it alleges, including:

Kidzee Early Learning and Childcare did not immediately respond to a request for comment from CBC News. However, in a statement posted to Facebook, the organization said the staff members in question had been fired.

“We are facing the consequences of a few irresponsible staff members that were all certified by Alberta licensing to work in child care. All staff members were fully certified and had their detailed background checks completed before being hired,” the statement reads.

“Every single requirement was followed in the hiring and training of these staff members. We have been co-operating and investigating along with Alberta licensing, and all the responsible staff members were discharged immediately upon the infractions coming to light.”

The notice says the investigation consisted of interviews with the licence holder representatives, discussions with program staff, a review of video footage, conversations with parents of affected children and a review of plans, records and staff qualifications.

In its statement posted to Facebook, Kidzee raised concerns that provincial officials had failed to acknowledge the “responsible staff members” at the facility, writing that “all remaining staff members worked exceptionally hard [until] the last day to take care of every child at the centre.”

However, Children’s Services said in an email to CBC that it’s the responsibility of the child-care operator to monitor staff for any misconduct, just as employers in other sectors are expected to make sure their workers are abiding by the law while at work.

After having lost its licence, an operator is not able to apply for another one for two years, Children’s Services said. While an operator can apply for a review of the decision to cancel its licence, the operator must remain closed during the appeal process.

Khoi Tran said his three-year-old daughter attended the Kidzee location for six months. He said it had been a positive experience. He picked up his daughter last Friday from the facility and was met by representatives from Children’s Services.

“I’m actively trying to find daycare for my child. It’s been very difficult,” he said.

“If this is what they were seeing within the month of December, I’m just concerned of what’s been happening in previous months,” he said. “Was [my son] in an unsafe space, or was this an isolated incident?”