Businesses are buying into devices that claim to stop lightning, despite skeptics 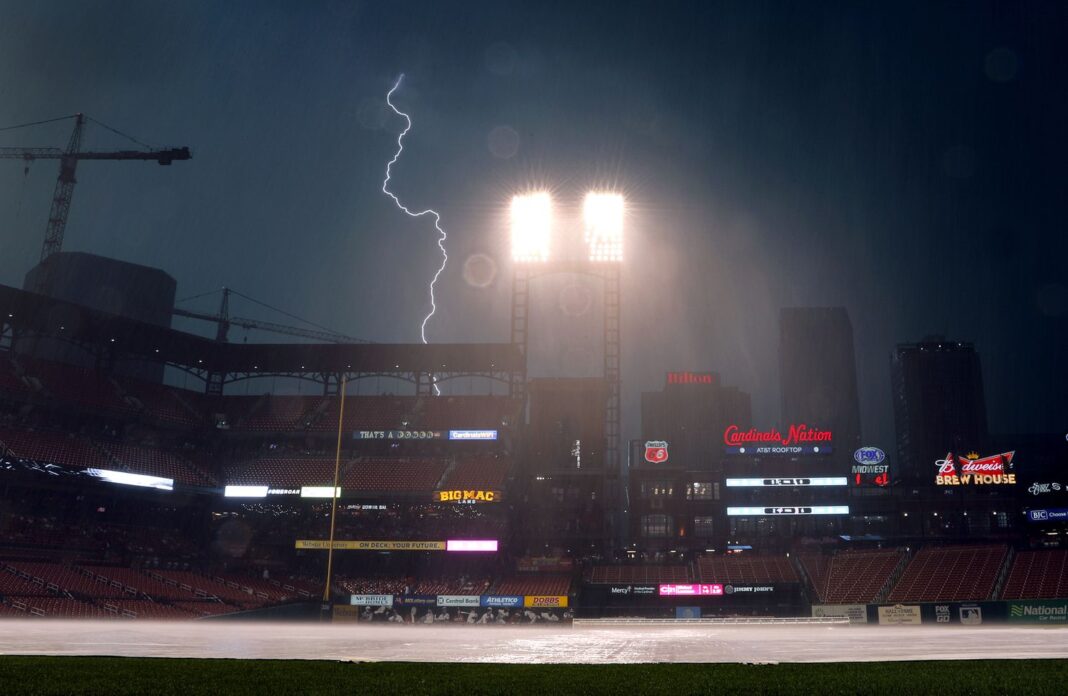 Lightning flashes in the distance as a thunderstorm passes over Busch Stadium during a rain delay in a baseball game between the St. Louis Cardinals and the Cincinnati Reds on July 14, 2018, in St. Louis. (Jeff Roberson/AP)
By Mike Branom

Baseball games can be a magnet for lightning, as they’re played outside under tall metal towers during storm-prone months, but the Cincinnati Reds believe they may have found a way to ward off dangerous bolts.

A lightning-suppression system — purporting to balance the electric field between the clouds and ground — was installed at Great American Ball Park in early May; since then, a team official said, the stadium has escaped being struck despite a summer’s worth of thunderstorms.

The Reds are piloting the system for Major League Baseball, so if the CMCE120 Lightning Suppressors — flattened aluminum globes about the width of the bases on the diamond — mounted atop the ballpark’s light poles keep working as advertised, they may be coming soon to a stadium near you.

“Our number one responsibility is the safety of people in this ballpark,” said Reds vice president of ballpark operations Tim O’Connell, “and if we can have another tool to make this a safer place to be, I’m all for it.”

Still, the Reds have left in place the lightning rods studding GABP as well as a lightning-detection system. O’Connell said the stadium, in an average season, has about a dozen games during which threatening lightning prompts the team to order fans out of exposed seats.

Cloud-to-ground lightning strikes occur when a connection is made between channels of negatively charged ions, called leaders, emerging from storm clouds and positively charged streamers reaching up from the ground.

According to Indiana-based EMP Solutions, which sold the devices to the team, a suppressor — which in technical terms is a non-polarized capacitor — works by balancing the electric field within a 120-foot radius and neutralizing the streamers.

The technology comes from a concept the inventor Nikola Tesla patented in 1918, Kothari added.

But some lightning experts say the devices won’t work because the immutable laws of physics mean they can’t work, and reliance on them could jeopardize public safety.

“Lightning events are complex weather phenomena that often extend over many miles in many directions. The suggestion that a small object on a pole could possibly possess powers to attract or repel lightning over an appreciable distance is simply not rooted in established physical facts,” said Jennifer Morgan, education coordinator with the Lightning Safety Alliance. “Promising protection for people in open areas during storm conditions is irresponsible, especially in the case of a sports stadium where tens of thousands of people are potentially exposed to lightning strike risk.

“Relying on unproven gimmicks to protect people in a stadium is an invitation for a lightning tragedy.”

A bolt of lightning strikes beyond the centerfield wall at Nationals Park. (Jonathan Newton/The Washington Post)

Also skeptical is one of MLB’s top stars.

Possible or not, the Reds say the system at GABP is working.

O’Connell said he learned of the suppressors two years ago through a professional connection, then performed his due diligence by asking the team’s meteorological advisers — and an MLB team can have many — whether such a thing was possible.

As O’Connell remembered, “Their response, frankly, was, ‘We’d love to see it work.’ ”

O’Connell also spoke with clients of EMP Solutions including sailboat owners and parks districts, and he did not receive any negative reviews.

When Capital Weather Gang did its own investigating, reaching out to companies and government agencies listed as customers in EMP Solutions documents or news articles, it, too, found customers who raved about the suppressors — including one client that really knows about thunderstorms.

The National Weather Service’s office in Amarillo, Tex., had lost $157,000 worth of electronics to damage caused by lightning bolts in the year before buying a suppressor. After its installation on a tower by the office, no strikes.

“We approve of it,” said David Wilburn, electronic systems analyst at the Amarillo office.

Like the Reds and MLB, Amarillo is piloting the system for the other forecast offices in the National Weather Service’s Southern Region.

Other entities to speak positively about EMS Solutions’ products:

However, the endorsements certainly were not unanimous. Capital Weather Gang was given no comment by:

One critic of EMP Solutions’ technology says the absence of such suppressors at space-launch complexes in lightning-prone Florida provides evidence these devices do not work.

“Not just NASA, but any commercial launch provider, whether it is Space X or Blue Origin or Boeing or ULA or you name it … none of these gadgets are used at their launchpads — not a single one,” said Carlos Mata, chief technologist for Scientific Lightning Solutions and a former technical lead of Kennedy Space Center’s Advanced Electronics and Technology Development Laboratory.

Also, Mata added, there are myriad capacitors in use across the world, and no one believes those are preventing lightning strikes.

Kothari, in response, said he believes the critics are wrong — but he gets where they’re coming from.

“It’s a disruptive technology,” Kothari said. “If everybody understood what this did and what it could do for them and the benefits of this over regular lightning protection, it would put the lightning rod people out of business.”

Correction: The original version of this article named the Deerfield Beach, Fla. city manager as Dave Hall. His actual name is David Santucci.