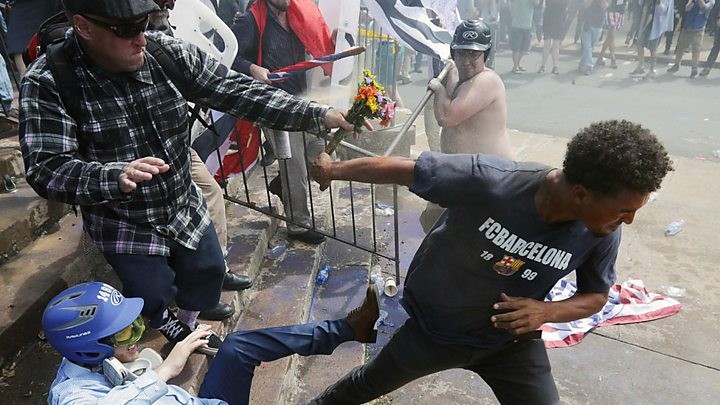 President Trump has said he is scrapping two business councils after more bosses quit over his handling of violent clashes in Virginia.

Business leaders left the White House manufacturing council after the backlash against how he reacted to the far-right rally last weekend.

The clashes culminated in a woman’s death and nearly 20 wounded when a car ploughed into a crowd of anti-fascists.

Mr Trump said the manufacturing and strategy forums would be disbanded.

The decision comes as the heads of post-it maker 3M, Campbell Soup, Johnson & Johnson, and United Technologies announced their resignations on Wednesday.

Mr Trump said on Twitter: “Rather than putting pressure on the businesspeople of the Manufacturing Council & Strategy & Policy Forum, I am ending both.”

Before Mr Trump’s announcement, the Strategy and Policy Forum announced it was a joint decision to disband the council.

Businesses have been under pressure to distance themselves from Mr Trump over his handling of the clashes in Charlottesville, Virginia.

Also on Wednesday, the mother of Heather Heyer, who was killed in the clashes, delivered a powerful message at her daughter’s public memorial in Charlottesville.

“They killed my child to shut her up. Well guess what, you just magnified her,” she said before the crowd erupted into a standing ovation.

Why did they leave?

On Monday, Mr Trump belatedly condemned the white supremacist and neo-Nazi groups that rallied in small Virginia town on Sunday.

But in a rancorous news conference on Tuesday he backtracked and again blamed left-wing counter-protesters for the violence too.

JPMorgan CEO Jamie Dimon, a member of the Strategy and Policy Forum, released a separate statement on Wednesday saying he strongly disagreed with Mr Trump’s recent statements, adding that “fanning divisiveness is not the answer”.

“Constructive economic and regulatory policies are not enough and will not matter if we do not address the divisions in our country. It is a leader’s role, in business or government, to bring people together, not tear them apart,” he said.

Denise Morrison of Campbell Soup Co said she could not continue to participate in the advisory panel after Mr Trump’s comments. Activists had called on Campbell Soup, among other firms, to take action.

The calculus for business leaders working with the Trump administration has changed quickly.

At that point there was some media speculation – through unnamed “corporate leaders” – that the wise move would be to wait out the storm rather than pick a fight with the president.

Companies like Boeing and General Motors had tangled with the president in the past, and they (and their stock prices) generally ended up the worse for it.

This time was different. As more corporate chiefs headed to the exit, the riskier move – from a business as well as political perspective – became staying put. The president, despite further tweets and verbal swipes, was unable to staunch the bleeding. His rhetorical gymnastics on the Charlottesville situation only made matters worse.

Is the collapse of the Trump regime’s corporate entente a sign his fortunes are in a tailspin? Or is the man who ascended to the presidency without their help perfectly capable of staying there now that they’ve abandoned him?

For every CEO that drops out of the Manufacturing Council, I have many to take their place. Grandstanders should not have gone on. JOBS!

Why were Mr Trump’s remarks so controversial?

The president was under pressure to explicitly condemn white supremacists who were behind Saturday’s far-right rally, where violent clashes left a woman dead and nearly 20 people injured.

The rally, supported by neo-Nazis and white supremacists, was in protest of the removal of a statue of Robert E Lee, a general who had fought for the pro-slavery Confederacy during the US Civil War.

But Mr Trump reversed course on Tuesday and instead appeared to defend the rally’s organisers.

“What about the alt-left that came charging… at the, as you say, the alt-right? Do they have any semblance of guilt? (…) There are two sides to a story,” Mr Trump said in response to one reporter.

He condemned the driver of the car who rammed into a crowd of counter protesters and killed a woman, but said those who had marched in defence of the statue had included “many fine people”.

Mr Trump’s remarks were welcomed by David Duke, a former leader of the Ku Klux Klan.