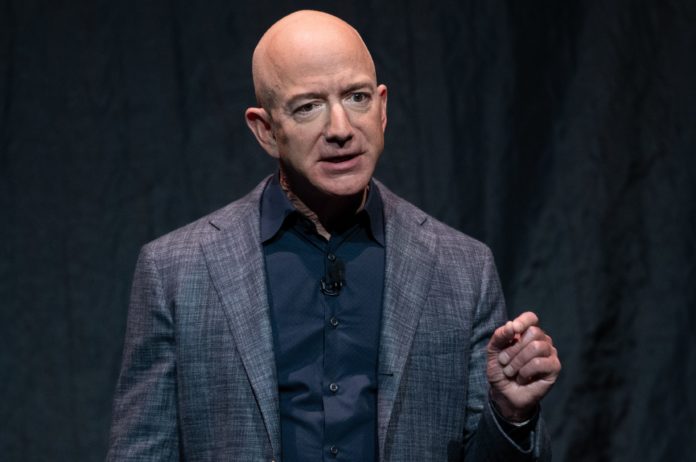 Amazon CEO Jeff Bezos announces Blue Moon, a lunar landing vehicle for the Moon, during a Blue Origin event in Washington, DC, May 9, 2019.

Amazon is reportedly considering a health-tracking wearable — and a lot of people in the health industry think it makes perfect sense.

The space is extremely crowded, and companies such as Apple and Fitbit have been marketing health-tracking wearable devices for years. But Amazon is considering making its own move in the space, Bloomberg reports, with a device that can discern the wearer’s emotional state from the sound of his or her voice, among other things.

The device might never reach consumers. Amazon, like most tech companies, frequently tests ideas internally that never see the light of day.

But it’s likely that Amazon will try, despite the competition and the challenges of developing new hardware. Here’s why it’s a no-brainer for the company.

Filling in the gaps

A wearable device would let Amazon collect new types of data about customers to target products and advertisements to them more effectively.

Today, Amazon can theoretically collect lots of health data about its customers from their buying patterns. It sells over-the-counter medicines, glucometers and other health products via its marketplace. It could analyze dietary habits based on buying patterns at Whole Foods. And it has basic demographic information, which has some correlations to health and life expectancy.

But Amazon has no way to know about its users’ habits once they stop shopping on Amazon or engaging with an Echo device. It lacks information about its users on the go: Their commutes, lifestyles, social lives and fitness levels.

Meanwhile, other companies are garnering those insights, as wearables become increasingly popular.

“Health wearables have the potential to become as essential to consumers as the iPhone, and Amazon may soon be competing with Apple as they both increase their focus on health care,” said Bill Evans, managing director of Rock Health, a health-tech research and investment firm.

Amazon knows wearables aren’t going anywhere. So if Amazon can carve out its own slice of the market, it could help the company target its customers with health-related products and even lifestyle interventions.

An Amazon wearable would be a more private way for consumers to interact with health professionals.

Amazon’s Alexa team recently announced that it is HIPAA-compliant, meaning it can work with health developers that manage protected health information. It would be natural to assume that doctors and therapists will someday be able to communicate with patients via Alexa, but health experts told CNBC that’s not going to happen anytime soon.

In a nutshell, that’s because of privacy issues associated with a voice-activated device sitting in an open space. Imagine a teenager in a household having an intimate conversation with a doctor when a parent or friend walks in and overhears it.

Wearables such as wristwatches and earbuds don’t have the same problem. Apple has repeatedly referred to its smartwatch as its most “personal device ever.”

It already has the team

We know Amazon has people with experience in health wearables.

Amazon hired a cardiologist last year, Dr. Maulik Majmudar, who has a lot of experience with setting up clinical studies for new wearable products. Prior to joining Amazon, Majmudar worked with a team at a start-up called Quanttus, which was developing a new way to track blood pressure via a wrist-worn wearable device.

The Bloomberg report notes that a beta testing program is underway, which presumably will involve some level of testing to ensure that any health information shared with a consumer is both accurate and sensitive. Majmudar has plenty of experience in doing that and in presenting the data to federal regulators.

Beyond that, it has scientists, engineers and physicians working across many of its research and development groups, including Lab126 and its secretive Grand Challenges health team. It has also hired a handful of doctors in recent years, including Majmudar and others, which would be useful in helping it position the device to the medical industry.

If Amazon gets into the wearables business, it could provide a monitoring system of sorts for consumers who are at risk for serious health events. Many older Americans are alone and lack social connections, says Kyle Armbrester, CEO of Signify Health, a company that provides services at home to people with chronic medical conditions. That might help Amazon corner a market of older, sicker and wealthier users, which mirrors general demographic trends.

“Simple things like check-ins can provide immense predictive power on how someone is doing, especially if there are deviations from a normal set of behavior over time,” said Armbrester.

Amazon, if it moves ahead with its plans, intends to learn a lot about its users’ emotional states: A U.S. patent filing from 2017 describes a system in which voice software uses analysis of vocal patterns to determine feelings such as “joy, anger, sorrow, sadness, fear, disgust, boredom, stress, or other emotional states.”

At that point, Armbrester suggests, Amazon could use its existing expertise to provide solutions to problems before they become serious, such as a delivery of a medication via PillPack, the Internet pharmacy it acquired in 2018, or a shipment of food.

This would help Amazon build a connection with its consumers — and also unlock new revenue models in the $3.5 trillion health sector.