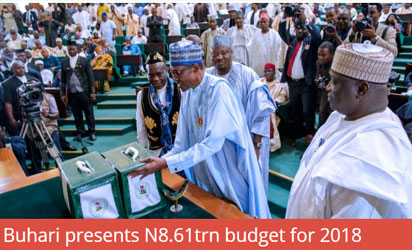 Buhari unhappy with 2018 budget passed by NASS — Presidency source
There were indications, last night, that President Muhammadu Buhari was unhappy with 2018 budget finally passed by National Assembly and transmitted to him to append his signature. Buhari presenting 2018 budget to joint NASS session That misgiving, notwithstanding, the President will tomorrow sign the fiscal document into law to fulfil a legal requirement and avoid the recrimination of returning the bill to the NASS due to the many distortions done to the budget he presented to the lawmakers on November 7, 2017. A top source, who is knowledgeable in the matter, told Vanguard in confidence that the President was irked by the huge amount of money injected into the budget by the lawmakers and diverted to other causes unintended by the Federal Government. The source said apart from jerking up the budget from the initial N8.6 trillion proposed by Buhari to N9.12 trillion, the NASS, as usual, introduced new projects, which have nothing whatsoever to do with the federal budget and funding. The source said while the Presidency wanted the increment in the budget to be used for funding deficit, the NASS insisted it must be allocated to ‘projects’ decided by them. The source said: “One discernible pattern seen in the document to be signed by the President is the unwarranted introduction of local government and state projects into the national budget by the lawmakers. That means that the level of ‘padding’ this year may be higher than the previous years. “When the breakdown of the budget is unveiled, it will be clear to Nigerians that the ‘purchase of tricycles, sewing machines and sinking of boreholes’ programmes in the concurrent and residual lists, was given more attention than key national projects and programmes by NASS. “But the President is not going to return the budget to the NASS so as to prevent further delay and stifling of the economy given the fact that the year is almost gone.” The Minister of Budget and National Planning, Senator Udoma Udo Udoma, is expected to give a breakdown of the national budget on Thursday after being signed into law by Buhari tomorrow. It will be recalled that the ‘padding’ of the 2016 and 2017 budgets led to a prolonged delay in the signing of the documents by the president and caused serious conflicts among members of the NASS, which led to the suspension of the House of Representatives member, Mumuni Jibrin, for 180 days. His suspension was later declared illegal by a judge, who ordered that Jibrin be paid his salaries and entitlements for the period of his illegal suspension, as the NASS has no right to suspend any member beyond 14 days
Share
Facebook
Twitter
WhatsApp
Pinterest
Linkedin
ReddIt
Email
Print
Tumblr
Telegram
Mix
VK
Digg
LINE
Viber
Naver
Previous article‘No matter how hard you try to propagate your feminist ideology, your own gender will continue to let you down’ – Freeze writes open letter to Chimamanda Adichie
Next articleSaraki leads Senate delegation to Russian Parliament today