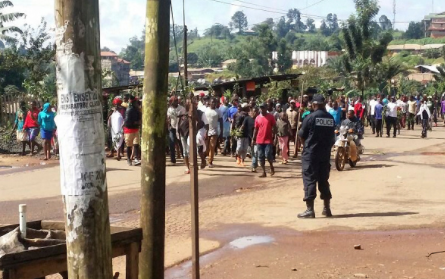 Since October 1, protesters from English-speaking regions of Cameroon have taken to the streets to call for symbolic independence from the country’s French-speaking majority.

According to CNN, the protests have led to at least 10 people as protesters and government forces have been involved in violent clashes.

The protests erupted after the government restricted access to internet in the regions, a move they took earlier this year which resulted in protests both online (with the hashtag #BringBackOurInternet) and offline.

The internet was eventually restored on April 20, after 94 days of shutdown.

“Credible sources indicate that some of these deaths resulted from excessive use of force by the security forces. People should be allowed to exercise their right to peaceful assembly and freedom of expression, including through having uninterrupted access to the Internet,” Rupert Colville, a spokesman for the high commissioner’s office said.

A researcher with Amnesty International Ilaria Allegrozzi has said the violence has reached “crisis point” adding that about 20 persons have been killed (as against 10 stated by the government), dozens left with gunshot wounds, and hundreds injured.

Areas controlled by Britain and France joined to form Cameroon after the colonial powers withdrew in the 1960s.

As a result, the country now has 10 semi-autonomous administrative regions; eight are Francophone, while the Northwest and Southwest regions are home to approximately five million English-speakers.

Anglophones in the country have long complained that they face discrimination, saying that they are excluded from state jobs as a result of their limited French language skills.

They also complain that official documents are often only published in French, even though English is also an official language.

CNN reports that President Paul Biya, who has been in power for 35 years, has condemned all acts of violence irrespective of their sources and perpetrators