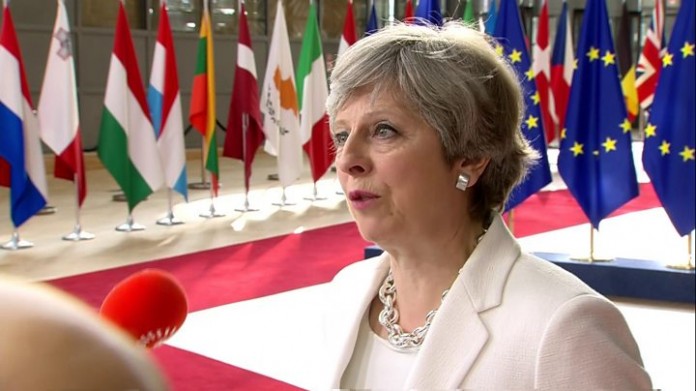 Europe’s most senior official has criticised the UK’s offer to EU nationals after Brexit, claiming it could “worsen the situation” for them.

European Council President Donald Tusk said the proposal was “below our expectations” and needed more detail.

He said the EU wanted to secure the “full rights” of all its citizens and British expats on the continent.

Theresa May said there were differences between the two sides but the UK was giving a “fair and serious” guarantee.

In response to claims by the former chancellor George Osborne, in an article for the Evening Standard, that she had “blocked” calls for the UK to offer a unilateral guarantee of rights in the aftermath of last year’s referendum, she said that was “certainly not my recollection” of events.

Both the UK and the rest of the EU say they want to come to an arrangement to secure the status of the 3.2 million EU citizens in the UK and the estimated 1.2 million Britons living in EU countries on a reciprocal basis.

Under plans announced on Thursday by Mrs May, the UK envisages giving all EU citizens the right to stay after the UK’s exit – due on 30 March 2019 – and granting those resident for at the least five years the same rights to welfare, pensions and education as UK citizens.

However, no cut-off date for the package has been specified by Downing Street and further details of the plans will not be released until Monday.

The offer has received a mixed response from EU leaders with many describing it as a “good start” but calling for more detail.

Mr Tusk, who represents the other EU 27 nations, said the EU would “analyse line by line” the UK’s proposals when they were published in full on Monday.

But he told reporters in Brussels: “My first impression is that the UK’s offer is below our expectations and that it risks worsening the situation of citizens.”

And Joseph Muscat, the prime minister of Malta – who currently holds the rotating presidency of the EU – warned of the danger of “pitfalls”, in which people were “treated differently” depending on when they arrived in the UK.

“Everyone in Europe wants a situation where we have a blanket fair treatment of all our citizens”.

Both sides would like to get the issue of citizens’ rights wrapped up as soon as possible – it would be good for morale to get an early win, and they have more difficult issues to tackle.

But while there is a sense that progress can be made, there are still some tricky technical questions to deal with.

Which rights will be extended to immediate family members living elsewhere – to children in particular? And who will guarantee citizens’ rights in the event of any legal dispute? The EU has already insisted that the European Court of Justice should be involved; the UK insists that British courts should uphold the deal.

It is also not clear what the cut-off date should be for citizens to qualify for any offer that is agreed. The UK proposal suggests a date between March 2017 and March 2019 – although it is highly unlikely that the EU would be willing to accept a date that has already passed.

From an EU perspective, what we’ve heard so far from the UK side remains rather vague. EU negotiators will want to see the details of this proposal which are only due to be made public next Monday.

The European Union has said EU citizens should continue enjoying the same rights as they do on a lifetime basis, enforceable by the European Court of Justice. But the UK’s view is that British courts should have the jurisdiction.

Mrs May said there had been a “very positive” discussion with other EU countries but acknowledged differences over how the plans would be enforced, saying she wanted the UK’s “highly respected” courts to oversee them.

“Let’s be clear about what we are saying. Those EU citizens who have made their lives and homes in the UK will be able to stay and we will guarantee their rights,” she said. “I think that is a very serious offer… and the matter will now go into the negotiations.”

The PM said the issue would be one of the first to be discussed and she wanted an agreement as soon as possible.

Anne-Laure Donskoy, founding member of the 3million – which aims to protect the rights of EU citizens living in the UK – said the offer was “disappointing” and “really falls short of our expectations”.

She told BBC Radio 4’s Today programme it was “neither fair, nor really serious”.

“It is like a teaser this statement, it gives you general direction of travel potentially, but there are things in the statement that need to be unpicked.

Labour leader Jeremy Corbyn urged the government to guarantee all UK-based EU citizens full residency rights, saying the current offer “doesn’t go far enough and leaves uncertainty for those who have been here for less than five years”.

“These are people who are working here and have families here – we have to end their uncertainty.”

What do you want to know about the government’s plans?

Use this form to ask your question:

If you are reading this page on the BBC News app, you will need to visit the mobile version of the BBC website to submit your question on this topic.