Breaking: Otto Warmbier dies days after being brought back to the US from North Korea 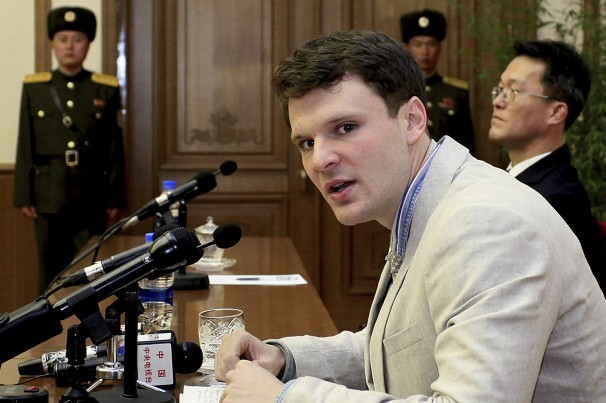 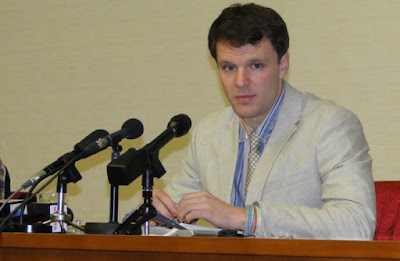 The University of Virginia student, Otto Warmbier, who was held in North Korea for 15 months has died days after being brought back to the United States in a coma. Warmbier was returned to his family in Ohio just a week ago after spending 17 months in North Korea where he was arrested.
His death was announced in a statement released by his family via the hospital which he was taken to last week upon his return to the United States.
“It is our sad duty to report that our son, Otto Warmbier, has completed his journey home.  Surrounded by his loving family, Otto died today at 2:20pm.

It would be easy at a moment like this to focus on all that we lost — future time that won’t be spent with a warm, engaging, brilliant young man whose curiosity and enthusiasm for life knew no bounds. But we choose to focus on the time we were given to be with this remarkable person.  You can tell from the outpouring of emotion from the communities that he touched — Wyoming, Ohio and the University of Virginia to name just two — that the love for Otto went well beyond his immediate family.

We would like to thank the wonderful professionals at the University of Cincinnati Medical Center who did everything they could for Otto. Unfortunately, the awful torturous mistreatment our son received at the hands of the North Koreans ensured that no other outcome was possible beyond the sad one we experienced today.

When Otto returned to Cincinnati late on June 13th he was unable to speak, unable to see and unable to react to verbal commands. He looked very uncomfortable — almost anguished.  Although we would never hear his voice again, within a day the countenance of his face changed — he was at peace.  He was home and we believe he could sense that.

We thank everyone around the world who has kept him and our family in their thoughts and prayers.   We are at peace and at home too.”

Warmbier was 21 when he was arrested for stealing a poster from a hotel in North Korea during a trip there.
He was accused of committing a ‘hostile act’ against the dictator-led country and ws sentenced to 15 years of hard labour.
Last week, suddenly, he was released and allowed to return home to the US.
When he returned, however, doctors were horrified by his condition. He was unable to speak or communicate at all with his family and doctors described his state as one of ‘unresponsive wakefulness.’
Upon his release, the North Korean regime blamed Warmbier’s condition on botulism – a form of food poisoning which they said he’d suffered since the day he was sentenced.
The man’s father rejected the claim, blaming his almost vegetative state on how it treated him.
‘There’s no excuse for the way the North Koreans treated our son and the way they have treated so many others,’ Fred Warmbier said at a press conference last week.
A video taken days before his arrest was released by his devastated family last week.
It showed him throwing snowballs with his friends, oblivious to the bleak fate which awaited him.
Source: UK Daily Mail

His story from Wikipedia
Fred Warmbier stated that his son Otto was traveling in China at the end of 2015 when he saw a company offering trips to North Korea. He decided to go because he was adventurous, according to his father, who accused the tour operator of specifically targeting young Westerners with slogans like, “This is the trip your parents don’t want you to take!” Fred Warmbier said the China-based tour operator, Young Pioneer Tours, advertised the trip as safe for U.S. citizens.[2]
Warmbier traveled to North Korea for a five-day New Year‘s tour of the country organized by Young Pioneer Tours. Ten other U.S. citizens were in his tour group.[4][14][15][16][17] During his stay at the Yanggakdo International Hotel in Pyongyang, Warmbier allegedly stole a propaganda sign from a staff-only floor of the hotel.[18] The poster said, “Let’s arm ourselves strongly with Kim Jong-il‘s patriotism!”. Harming such items with the name or image of a North Korean leader is considered a serious crime by the government.[19]
According to Warmbier’s parents, the story about the poster was fabricated by authorities in order to detain him, and he was abducted at the airport when he was trying to leave the country.[2] A video purporting to show the theft was released by state-run Korean Central News Agency on March 18, 2016. In the 18-second low-resolution video, an unrecognizable figure removes the sign from the wall and places it on the floor, leaning it against the wall. This action is shown twice, followed by a higher-resolution picture of the sign on the wall. The face of the person removing the poster is not seen during the video clip.[20][21]

On January 2, 2016, Warmbier was arrested for theft just prior to departing North Korea from Pyongyang International Airport.[9] The other guests in his tour group all left the country without incident. His crime was described as “a hostile act against the state” by the North Korean news agency KCNA.[16]
In a news conference on February 29, 2016, Warmbier confessed to stealing a piece of North Korean propaganda to take back to the United States. He said he stole the banner for the mother of a friend who wanted it as a souvenir to be hung on the wall of a church in his hometown of Wyoming. He was offered a used car worth $10,000 as payment or if he was detained and didn’t return, $200,000 would be paid to his mother in the form of a charitable donation. Warmbier said he accepted the offer because his family was “suffering from very severe financial difficulties.”[22] He also said he was encouraged in his act by his desire to join the Z Society, a “semi-secret ring society” and philanthropic organization at the University of Virginia.[18]
Warmbier’s confession was as follows:

I never, never should have allowed myself to be lured by the United States administration to commit a crime in this country, I wish that the United States administration never manipulate people like myself in the future to commit crimes against foreign countries. I entirely beg you, the people and government of the DPRK, for your forgiveness. Please! I made the worst mistake of my life![23]

However, Warmbier’s father later said the confession was coerced and that the story about the used car and church in Wyoming was nonsensical.[2]
On March 16, 2016, two hours after U.S. envoy Bill Richardson met with two North Korean diplomats from the United Nations office to press for Warmbier’s release;[24] Warmbier was sentenced to 15 years of hard labor