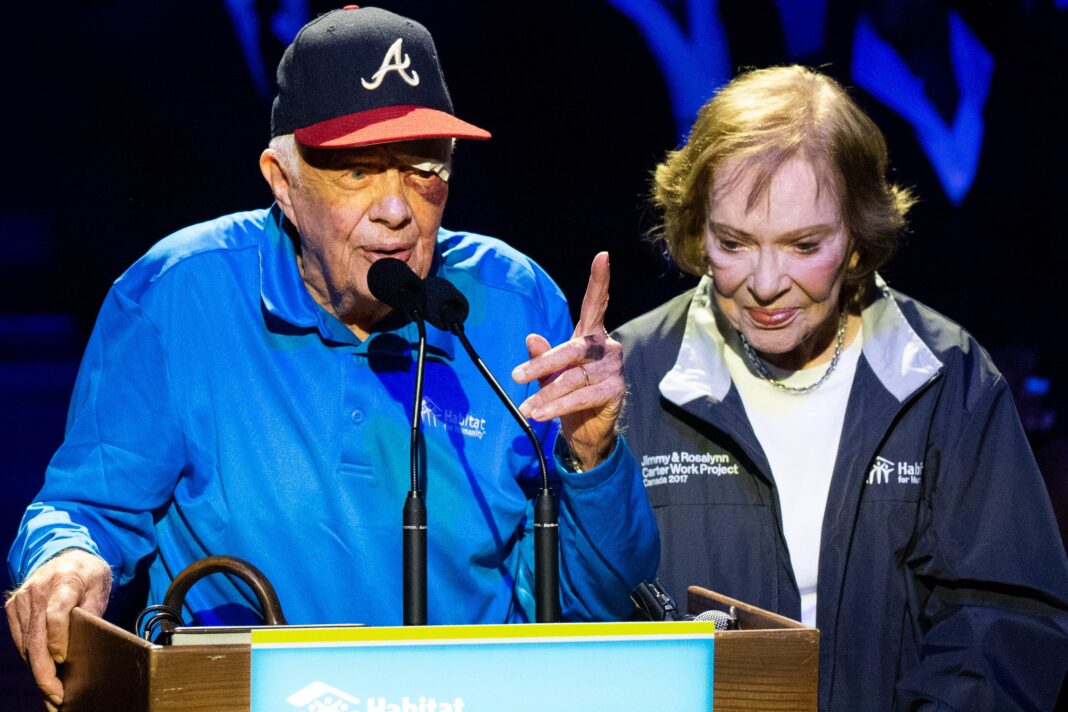 Former President Jimmy Carter had a black eye and 14 stitches after falling Sunday at his Georgia home but made it to an evening concert in Tennessee to rally volunteers ahead of a home building project for Habitat for Humanity. (Oct. 7) AP, AP

NASHVILLE, Tenn. – Former President Jimmy Carter walked across the stage at Nashville’s historic Ryman Auditorium on Sunday night, an Atlanta Braves ball cap on his head and a white bandage over his left eyebrow.

“First of all, I want to explain my black eye,” the 95-year-old Carter began.

While rushing from church to lunch, Carter fell and hit his forehead “on a sharp edge” in his home in Plains, Georgia. He had to go to the hospital, where he received 14 stitches.

But he wasn’t going to let a little bump keep him from getting on a plane to Music City for this week’s Habitat for Humanity project.

“I had a No. 1 priority,” Carter told the riveted Ryman crowd, “and that was to come to Nashville to build houses.”

The Carter plan to work all week alongside hundreds of volunteers – including Garth Brooks and Trisha Yearwood – to construct 21 new affordable homes in Nashville.

Though the former president said he isn’t sure how much energy he will be able to expend after the injury, he and former first lady Rosalynn Carter will contribute to each new home.

“All 21 houses will have something we built,” he said.

This year marks the 36th year of the Carter Work Project, a decadeslong humanitarian effort focused on constructing and rehabilitating affordable housing for those in need across the country and around the world.

The opening ceremony at the Ryman also featured remarks from Tennessee Gov. Bill Lee, performances by the Fisk Jubilee Singers, the Nashville Symphony and music and witty banter from Brooks and Yearwood.

Jimmy Carter on running for president: ‘I hope there’s an age limit’

Trump on Carter: Donald Trump blasts Jimmy Carter as a ‘nice man’ but a ‘terrible president’

“Those are serious challenges for our community, but Nashville has always risen to the occasion,” Danny Herron, president and chief executive officer for Habitat of Greater Nashville, said on Sunday night.

This week is another opportunity to have a pivotal moment for our city, he said. And it comes working alongside “two of the greatest humanitarians ever to live” in the Carters.

“We’re here tonight due to a path of generosity and service and selflessness,” Lee said.

“A path that was forged by President Jimmy Carter and his wife, Rosalynn.”