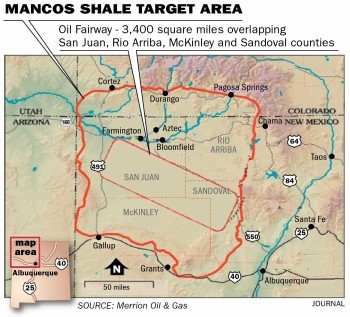 While other natural gas drillers are paying a premium for acreage in prized U.S. shale formations across Texas and Pennsylvania, BP Plc may have just found a gem in a largely ignored corner of New Mexico.

The London-based oil giant started producing from a gas well in New Mexico’s Mancos shale that could turn out to be a “significant new source of U.S. natural gas supply,” according to a statement Monday. The well averaged 12.9 million cubic feet a day in its first month, the highest output achieved in the San Juan Basin in 14 years, the company said.

The well could bring gas explorers one step closer to unlocking a shale play that, according to the U.S. Geological Survey, is home to one of the nation’s largest reserves of the fuel. The shale boom that’s turning the U.S. into a net exporter of the heating fuel has so far left the Mancos behind as explorers seek out cheaper plays. But with acquisition costs in proven fields rising, they’re turning to less popular regions to get more for their drilling dollars.

“Everyone is trying to find another play,” James Sullivan, analyst at Alembic Global Advisors, said by phone Monday.

The well “gives us confidence to pursue additional development of the Mancos Shale, which we believe could become one of the leading shale plays in the U.S.,” Dave Lawler, chief executive officer of BP’s U.S. onshore oil and natural gas business, said in the statement.

The costs of getting a well online in the Mancos remain a challenge. Even as BP speaks of the area’s potential, others are ditching acreage there: Last week, ConocoPhillips completed a sale of San Juan Basin assets to Hilcorp Energy Co. Last year, WPX Energy Inc. sold about $900 million worth of assets to Terra Energy Partners LLC that included rights across about 150,000 net acres in the region.

Well costs in the Mancos surpass those in other basins because drillers there are dealing with more difficult rock formations and have to bore deeper, David Deckelbaum, an energy analyst at Keybanc Capital Markets in New York, said by email Monday. “It’s early innings for the play,” he said.

Typical Mancos well tests have cost $13 million to $15 million, Deckelbaum said. Meanwhile, most wells in Texas’s Permian Basin cost $8 million to $10 million while those in the Marcellus formation of the eastern U.S. range from $5.5 million to $7 million. BP declined to provide additional information on the costs of its Mancos well, which was drilled with a 10,000-foot (3,000-meter) lateral.

“We would say the well result ‘proves up’ the play generally, giving us confidence to continue to invest and economically develop these locations,” BP spokesman Brett Clanton said by email. The company plans to drill more wells in the Mancos this year, he said.

Last week, BP told investors that its gas business in the lower-48 U.S. states is making money even at prices below $3 per million British thermal units. Gas futures settled at $2.801 per mmBtu on Monday and have averaged above $3 this year.

In June 2016, the U.S. Geological Survey estimated that the part of the Mancos shale lying in the Piceance Basin of Colorado and Utah alone contains 66 trillion cubic feet of natural gas, making it the second-largest assessment of continuous gas resources the agency has ever done. The estimate was up from a previous assessment of just 1.6 trillion.

The horizontal drilling and hydraulic fracturing techniques that unleashed the shale boom in the U.S. have increased the potential of the Mancos, said Peter Pulikkan, an energy analyst at Bloomberg Intelligence. “It’s basically breathing new life into it.”

— With assistance by Dave Merrill