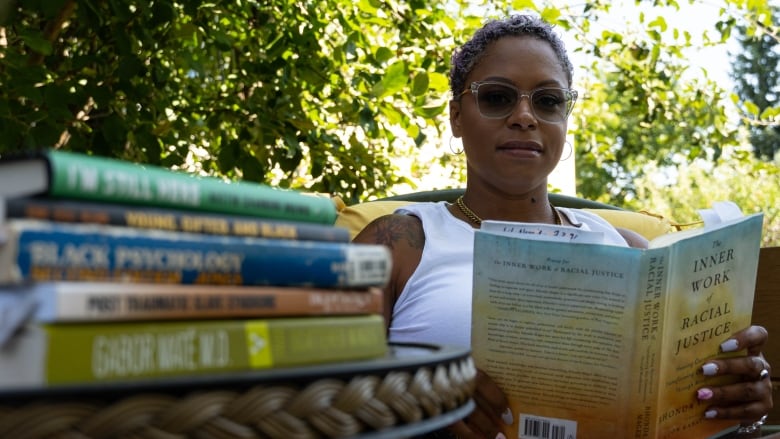 Meghan Stewart has dealt with mental health challenges since childhood. There have even been moments where she considered suicide.

“I have had those moments where it’s … ‘Well, I wonder if anybody would even notice if I was not on this Earth anymore,'” Stewart said.

Stewart began seeking help about 10 years ago, when she was living in Toronto. As a Black woman, she said it was important to find a mental health professional who was also Black.

“It really comes down to belonging and that deep connection that we all need as human beings,” Stewart said. “My therapist could relate race to trauma, or trauma that was from racist experiences or discriminatory experiences.”

Though Stewart has since moved to Ottawa, she remains with her Toronto-based therapist after struggling to find another Black mental health professional closer to home.

According to a 2020 study by Ottawa Public Health, which surveyed and interviewed 130 members of the city’s Black population, more than one-third of those surveyed had tried to access mental health services on behalf of themselves or others.

Of those who have sought help, the report found a large proportion felt “prejudice or a negative attitude” from doctors or mental health workers who don’t look like them or understand their lived experience.

It’s a problem that advocates for Black mental health and wellness have been flagging for years: There are not enough racially diverse professionals in the field to meet the needs of people of colour.

The shortage is felt most acutely in the field of psychology, according to Ottawa-based psychotherapist Kafui Sawyer.

“We’re in a mental health crisis in Canada,” Sawyer said. “Most of the people suffering are racialized people, and these racialized people are not getting the help they need from people who understand them and have the lived experience.”

Unlike counsellors and therapists, psychologists undergo more education and have the authority to diagnose patients.

WATCH | Why finding the right therapist is so important for Black patients:

Why finding the right therapist is so important for Black patients

Meghan Stewart, who has dealt with mental health challenges since childhood, says finding a Black mental health professional who could relate to what she was going through meant getting more helpful and relevant treatment. 1:56

In her 12 years working in psychotherapy, Sawyer has met only a handful of other Black people working in the profession, compared to meeting hundreds of white colleagues. The number of Indigenous psychologists is even fewer.

Dr. Helen Ofosu, also based in Ottawa, has worked as a psychologist for more than 20 years. She said she has met only one other working Black psychologist during her career and just a handful of others working in related fields.

“I just got used to it,” Ofosu said. “I don’t really think about it that much — until things like George Floyd and the reckoning that came afterward.”

Monnica Williams is the Canada Research Chair for mental health disparities at the University of Ottawa’s school of psychology. She said it’s difficult to determine exactly how many Black and Indigenous psychologists are in Canada because that information isn’t tracked by the Canadian Psychological Association (CPA). But she said “the numbers are abysmally low.”

“We know that there are not nearly representative numbers of psychologists of colour in the field, and definitely not enough to meet the needs of communities of colour,” Williams said.

Sawyer, Ofosu and Williams all say the problem lies in the accreditation process for psychological professionals.

To become an accredited psychologist in Canada, students need to be accepted into a graduate program at a post-secondary institution or an internship program. Getting into a program depends on having a faculty member agree to be their supervisor — a requirement that Sawyer said is problematic.

Sawyer said she herself was rejected from McGill University’s program and instead attended a private university in British Columbia. Williams went to school in the United States and Ofosu’s parents were academics, which helped her get into a program.

Graduate student Glory Mulera also opted to attend a private university, after learning it would be more difficult to get into a public one, “which is really disappointing,” she said.

The biggest frustration is how much more it costs to attend a private university, Mulera said, sometimes up to $45,000 for a two-year master’s program.

Psychology programs in Canada are accredited by the CPA, which advocates say has the power to mandate changes.

Sawyer, Ofosu, Williams and a number of other professionals have called on the CPA to use its power to have institutions keep track of just how many Black and Indigenous students they accept into graduate-level psychology programs, which would ensure that these groups are better represented.

“There are no checkpoints where people are being supervised or no accountability as to what these programs or institutions are actually doing in their programs,” said Sawyer. “The problem just perpetuates.”

Ottawa psychotherapist Kafui Sawyer says the process of finding a graduate school supervisor, the majority of whom are white, can alienate applicants of colour. 1:38

CBC News reached out to several post-secondary institutions across Ontario. Only the University of Toronto and Western University in London confirmed demographic survey initiatives among students for the purposes of improving equity, diversion and inclusion.

Officials with the CPA said the process for change is complicated and takes time. While the association can advocate for better representation in graduate programs, CPA president Dr. Ada Sinacore said it is “not in a position to require it.”

“The CPA recognizes that there is a problem of representation within the profession and that we need to increase representation, as well as literacy about diversity,” said Sinacore.

Sinacore pointed to what the association believes are the real barriers for Black, Indigenous and other racially diverse people seeking to enter the profession — the years of education required to become a psychologist, the pay and the small size of graduate programs.

The CPA said it is addressing the issues through advocacy and outreach, including the formation of a human rights and social justice committee and advocacy work. Since 2018, the association says it has also worked to revise accreditation standards.

“While that seems like a long time, for the kinds of robust consultation that we’re doing, you need to be able to take that time to do it well,” Sinacore said.

The revisions to accreditation standards will likely be put before the CPA board for approval in 2022, she said.

In terms of collecting race data, as advocates suggest, Sinacore said it’s something the CPA is exploring. But “there’s some concerns about whether or not we can legally collect that data,” she said.

“We are committed to this work … and members of the organization have been doing quite a bit of this work for some time. And even though we’ve been doing the work, it doesn’t mean there’s not a lot more work to be done,” said Sinacore.

But Sawyer and a number of other psychological professionals say the CPA has not acted quickly enough. In response, they have formed a Black psychology section of the CPA, which will advocate for more diversity in the profession.

“Instead of using this beautiful discipline in a positive way to heal … we’re actually engaging in more oppression,” Sawyer said. “We cannot sit down and just accept this colonialist way of helping people in Canada.”