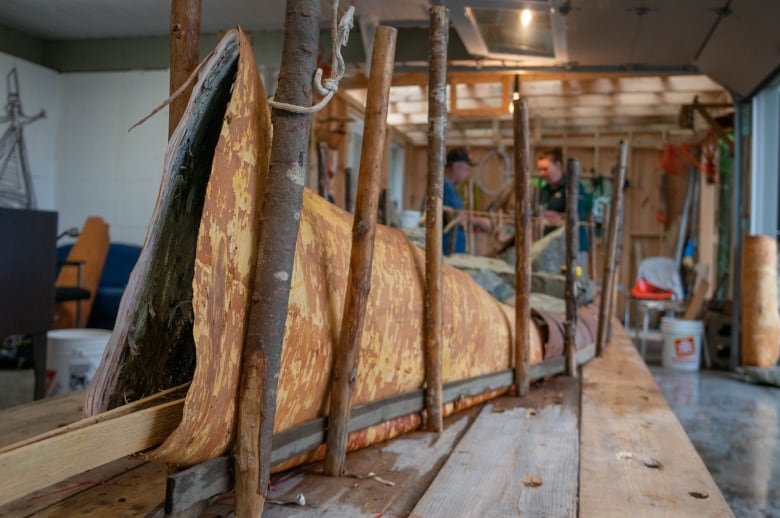 Rose Meuse never got to know her grandfather, but she pictures him steering a birchbark canoe through the waterways of Nova Scotia’s Kejimkujik National Park, where she and her daughter work as interpreters.

This summer, Meuse is constructing a birchbark canoe by hand alongside Todd Labrador, whose family has for generations built canoes in the traditional Mi’kmaw way using materials gathered from the land.

For the past several years, Meuse has been honing the craft that transforms birchbark and spruce roots into the vessels her ancestors once relied on.

Her grandfather, Billy Meuse, was a guide in L’sɨtkuk, their home community of Bear River First Nation.

He would travel to Kejimkujik through the rivers and streams that connect inland lakes to the Bay of Fundy.

“I feel like in a way, it makes me understand him or almost meet him in a way, even though I never did in person, every time I’m doing this. Because I know he was in these communities. He got to understand how these materials work,” said Meuse.

“It’s actually quite special, quite an honour to be able to be here and do this.”

Last week, she and Labrador started building a canoe from the raw materials, using pegs and rocks to start to shape the rough bark into the shape of a hull.

Before long, they’ll start binding the pieces together using hundreds of metres of spruce root that have been boiled and whittled so that it’s clear of bark and bends easily.

Eventually, the canoe will be nearly five metres long.

Through the summer, visitors to the national park — located 165 kilometres west of Halifax — will be able to stop by their workshop from Thursday through Sunday between the hours of 9:30 a.m. and 3:30 p.m. AT.

“Everybody is really curious about everything — the bark, the roots, the sealant, the ribs. And I just really feel that it’s important to be teaching this stuff because it’s just a way of opening people’s eyes. Look at what we did many, many years ago,” said Meuse.

Labrador jokes that there are days he doesn’t get as much done as he planned because he gets caught up talking.

A trained carpenter, Labrador also attended teachers college for a while and said it’s perhaps fitting that though he didn’t complete his degree, he has ended up in this role.

“I’m teaching my culture. It would be no fun for me to build a canoe without sharing. It’s something I have to do and I enjoy it,” he said.

“If people know about your culture, they can understand things better. And if we’re not willing to share, how are they going to learn? I love to share with visitors from all over the world, but also with Mi’kmaw youth and the elders.”

One of the young people he’s worked closely with is Rose Meuse’s daughter, Cedar Meuse-Waterman, who first helped build two canoes as an apprentice in the park in 2018.

When she started working for Parks Canada, she was initially hesitant while speaking with visitors. Three years later, she is guiding tours on her own, including of the petroglyphs, images of Mi’kmaw life engraved into stone hundreds of years ago.

“I like the mix of emotions that keep me confident and encourage me, that you know what, I have a place here too,” the 17-year-old girl said.

“Being an interpreter, I not only get to teach but I get to learn. One of my favourite things about engaging with the public is they get to tell me their stories, and their places in this world. And I find that so honouring.”

Last summer, the park was closed for renovations. Returning after experiencing the pandemic has given Meuse-Waterman a new appreciation for the land and the people drawn to it, she said.

When she has a chance, she’s still keen to lend a hand with this year’s canoe.

“It’s an amazing opportunity to try to get to learn more of the connections my ancestors had here,” she said.

“My great-grandfather was a guide on the water, showing people places. And I feel like my mother and I, we’re doing it here on the land. So now it’s our turn and we’re taking our place here in this world.”