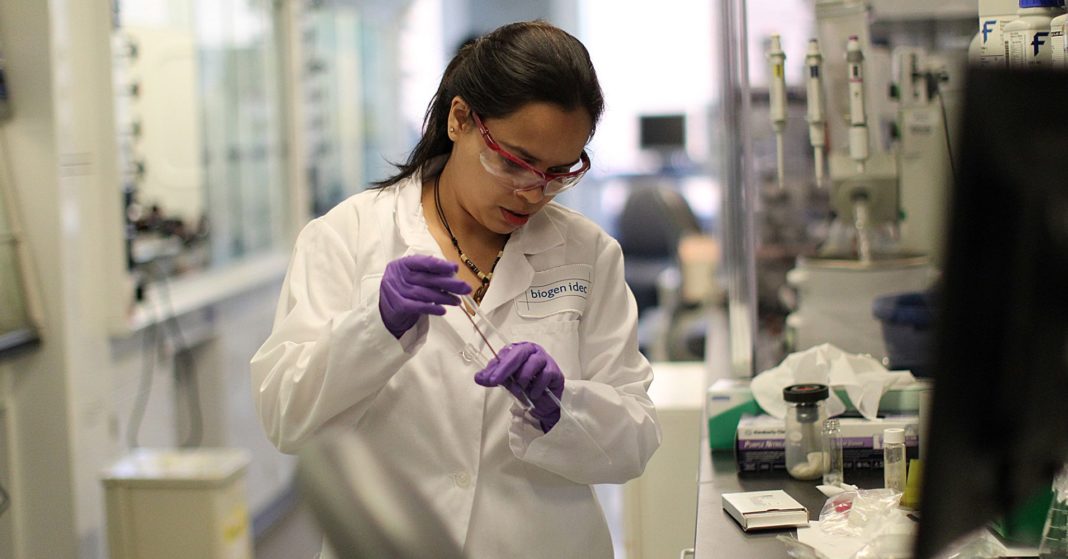 Analysts called it the biotech catalyst of the summer. But as we often see with trials of Alzheimer’s disease drugs, it turned out to raise more questions than provide answers.

Biogen and Eisai’s experimental Alzheimer’s therapy, dubbed BAN2401, was shown to slow the cognitive declines associated with Alzheimer’s disease — such as memory loss and trouble thinking clearly — by 30 percent at its highest dose, compared with placebo, over 18 months. Moreover, that dose showed a significant clearance of amyloid plaque buildups in the brain, of 93 percent.

That sounds very promising. But as Eisai revealed more details about the data in a presentation at the Alzheimer’s Association International Conference in Chicago late Wednesday, questions emerged: While the high dose showed a 30 percent improvement on a composite endpoint of cognition measures — one made up of several better-known scales — it didn’t meet statistical significance on one more common measure.

There were also questions about the lower doses, which didn’t appear to work. And, later, the reveal that the highest dose group, which performed so well, had significantly fewer patients with a genetic mutation known as APOE4 associated with Alzheimer’s disease than the other groups. While it’s not known whether patients with this mutation decline faster than those without it, analysts and investors raised questions about whether that could account for the more positive result in the high-dose group.

Biogen Chief Executive Michel Vounatsos, in an interview on “Squawk Box” Thursday morning, agreed that questions about the genetic differences among groups in the trial are fair.

“The study is a positive, but there are still some questions to be answered,” Vounatsos said. “And the one on APOE is obvious and very fair. We have to follow through on that.”

Biogen’s partner Eisai, based in Japan, is taking the lead on the studies, Vounatsos said.

On the Tokyo Stock Exchange, Eisai shares fell about 10 percent.

“While we speak, they’re working, I’m sure, to bring more clarity to the community on APOE,” he said, “and I think it’s a matter of a little bit of time.”

Vounatsos also said the results reinforce his confidence in the so-called amyloid hypothesis, the idea that targeting the plaque buildups, known as beta amyloid, in the brain will alter the course of Alzheimer’s disease. But much skepticism remains, as the failure rate in Alzheimer’s disease trials is even higher than that of the rest of drug development, with at least nine major late-stage drug failures in the last decade (not all of which targeted amyloid, but many of which did).

Eisai’s Lynn Kramer, chief medical officer of the Japanese company’s neurology business group, declared the trial a success Wednesday in a meeting briefing, noting, “We think this result is really the first of its kind,” and “robust enough to approach regulatory authorities to discuss next steps.”

The companies surprised investors earlier this month when they announced the study had met its goal after 18 months, because it hadn’t done so at a 12-month look. Both Biogen and Eisai’s stocks rallied so much the companies collectively gained $20 billion in market value, according to Robert W. Baird analyst Brian Skorney.

Maria Carrillo, chief scientific officer for the Alzheimer’s Association, struck a more measured tone in reacting to the data Wednesday.

“This is the second trial that is demonstrating a clearance of amyloid in the brain through PET imaging, and perhaps other biomarkers,” Carrillo told reporters. “And also has hints of some efficacy in cognitive tests.”

The first, she noted, was an earlier-stage trial of another Biogen Alzheimer’s drug, aducanumab, now in more advanced clinical trials expected to produce data in 2020.

“What we see is the amyloid hypothesis remains something that needs to continue to be tested,” Carrillo said.

The 30 percent slowing of Alzheimer’s progression in the results released Wednesday was measured by a scale called the Alzheimer’s Disease Composite Score, or ADCOMS, a combination of commonly used endpoints that gauge cognition, or the ability to remember things and think clearly. On a more common measure of cognition, known as ADAS-cog, the highest dose of BAN2401 slowed progression by 47 percent compared with placebo.

On another well-known measure, known as the Clinical Dementia Rating, or CDR, the difference between the highest dose and placebo was 26 percent, but that result didn’t meet statistical significance. That metric is particularly important because it’s the primary goal of Biogen’s ongoing aducanumab trial, Piper Jaffray analyst Chris Raymond wrote in a note to investors Wednesday evening.

“We do think this reaction is misplaced and shares will ultimately recover once investors put these data into perspective,” Raymond wrote.

The most common side effects were infusion reaction and one known as ARIA, or amyloid-related imaging abnormalities, which can manifest as brain swelling or bleeding. Such swelling occurred in less than 10 percent of patients across all treatment groups, Eisai’s Kramer said.

The study, of 856 patients, was conducted in those with early Alzheimer’s disease, those with mild cognitive impairment due to Alzheimer’s, or mild Alzheimer’s dementia. More than 5 million Americans are currently estimated to have Alzheimer’s, a number that’s expected to nearly triple by 2050 without effective interventions.

Biogen’s Vounatsos said Thursday morning that the results, though still subject to some questions, increase his confidence in the success of aducanumab, the company’s more advanced medicine for Alzheimer’s.

“The Biogen team is working on the long-range plan and we’re making a lot of progress, and these data increase the probability of success, clearly,” he said. “But we have to remain modest. We know that 99.6 percent of all the [Alzheimer’s] studies failed, and here we have some leads and we are reinforced by these additional datapoints.”

“I spoke to the team yesterday,” Vounatsos concluded, “and said we keep our heads down and we keep working.”