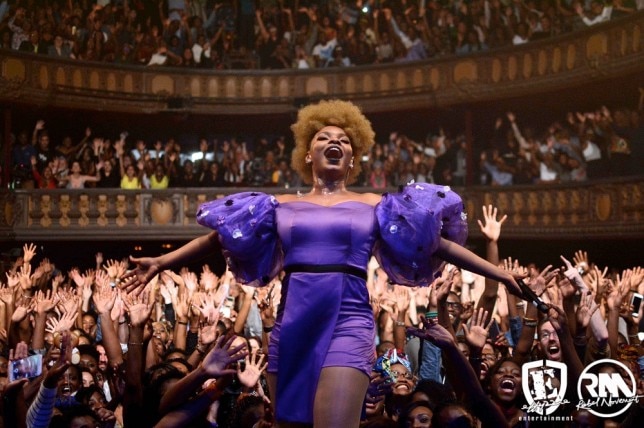 Here are the biggest moments of Nigerian music this year

We present you to you 2017’s biggest moments in Nigerian music.

What a year it has been. The Nigerian music industry continues to stand and move forward, with some of the biggest records on earth. In 2016, we increased the glass ceiling for achievement by attracting the international spotlight. 2017 has been us trying to generate value for that.

Elsewhere, the battle of Psquare brothers finally brought closure to what has been a tiring lengthy battle. They split. We have also seen Yemi Alade pull a off historic performance. Wizkid dominated as usual, with Drake, Davido, Tekno and the MOBOs all coming together for his highlights.

We present you to you the biggest moments in Nigerian music.

Don’t forget when Nigerian truly believed that Pia Mia, a US singer signed to Interscope will grab a Phyno album and steal a record that wasn’t even going to be a single. Who could have seen that coming. The case created a ruckus in Nigeria, and we at Pulse felt the heat a little. But ultimately, the truth did come out. One person bought the record, the other one got it too.

Every year in the past 4 years, we get stories of a Psquare fight. The Okoye brothers who have made magic together in the past, have been at loggerheads for almost the last half-decade. But this year, they finally broke up the group and moved their separate ways. It was the first time they had carried out their threats to split the group up, and it feels surreal that it has happened. Peter Okoye became the Mr P he has always dreamed of. While Paul turned into a Rudeboy, dropping a love song to mark the change.

Another interesting beef is the one of Wizkid and Davido. The arch-rivals sit at the throne of African music, and continue to be at each other’s throats in a bid to dominate. This year, the battle hasn’t been subtle. It has been direct, unforgiving and contagious. Wizkid and David have created such a division online that one has to either identify with one camp or the other to run commentary on a topic. It was this fight that created the name ‘Pon pon’, made Davido answer the name frog, and Tekno’s facial configuration was compared to a duck’s. Sick.

play Kiss Daniel was signed in 2013 on recommendation by his label mate, Sugarboy. According to investigations, the singer was signed to a 360 deal in Abeokuta, Ogun State.

Kiss Daniel already was going to leave G-Worldwide Entertainment. It was only a matter of how and when. This time, he found the sweet spot in his contract to break his contract and dash into the sunset with a bag of hits, and no regrets.

Emperor Geezy and his lawyers have already launched a case in court. Kiss Daniel’s lawyers are looking forward to the challenge, and everyone can rest easy in the knowledge that this might just go to court. Everyone except if you care too much about Kiss Daniel and his career.

M.I Abaga – ‘You rappers should fix up your lives’

play Three mixtapes and three albums have been released by M.I in almost a decade.

M.I Abaga recorded a song that attacked the egos, insecurities and the talents of many Nigerian rappers. Via that track he created a conversation about Hip-hop, the culture, and what it mean to make music in 2017, navigating all of the industry’s forces to score a hit.

The rapper received a number of responses to the track ranging from the polite to the savage. Rapper and OAP N6, was heavily involved with his reply which turned into a beef, where violence was threatened, accusations were thrown, and careers were insulted.

But it did make the industry talk.

play Nigerian music superstars Wizkid and Davido were both triumphant at the 2018 Music of Black Origin Awards (MOBO). Both musicians and arch rivals scooped awards

First, the victory here goest to Wizkid, Davido, and everyone who have been involved in the creation, marketing distribution, purchase and promotion of Nigerian music. For the first time ever, the MOBO awards had two categories open to Africa, and Nigeria won them both.

For Wizkid, this triumph was particularly uplifting because Starboy defeated American rapper Jay-Z, Drake, SZA, Cardi B, Kendrick Lamar and other strong nominees to clinch the highly coveted trophy. He received congratulations from everywhere, including politicians, government officials and a past Nigerian president.

play Banky W and the African contingent at the One Africa Music Fest London.

The One Africa Music Fest in London was rolled into the UK at the SSE Arena, Wembley, on June 13, 2017.

The show was promoted and announced to start off at 7pm, and on the event venue website everything was set.

Planned and executed by entertainment mogul Paul Okoye, and his firm, Upfront & Personal Global Management Consultants, the event travels through different cities of the world, celebrating African music stars with live performances from the best of the continent.

Performances came in hot, with a very bloated lineup of stars billed to perform. But the show was delayed and didn’t start on time.

Eugy, Sonoman, Praiz, Emma Nyra, Victoria Kimani, Atumpan, and more came through quickly to get the night rolling. There were also performances from 9ice, Tekno, Falz, Tiwa Savage, Phyno, Olamide and more. But time was poorly managed and the venue cut the power before Jidenna had a chance to perform.

“Cheers to the artists and organizers of #OneAfrica,” he wrote. “I was supposed to perform 2night but the show was cut off as I waited backstage. I’m disappointed that London wasn’t able to see me 2night. Regardless of whose to blame, to make this our time we must be on time #OneAfrica .”

It was a night of great music as Wizkid broke boundaries with a great performance at the Royal Albert Hall in London. He is the first Nigerian pop artist to do so.

The concert which held on Friday, September 29, 2017, was sold out two days before the concert, with tickets going fast.

Wizkid shut it down through his two-hour set, starting the night with songs from his EME beginnings to this point as Africa’s number one artist. He also brought out Wande Coal to share the moment with him.

The show was broadcast live on his official Facebook page, with great reactions from the crowd during the set. Songs such as ‘Jaiye jaiye’, ‘Ojuelegba’, and ‘Come closer’ moved the hall which was filled with over 5000 guests featuring an array of different races.

play Mr Eazi performing at the Wiz On The Beach concert.

Mr Eazi twice got on the wrong side of Nigerians. In January, he tweeted: The influence of Ghana in Nigerian music cannot be overemphasized, opening a controversy that pitted the two nations together. He was roundly attacked on social media by Nigerians. Such was the magnitude of the controversy that the singer had to publicly apologize for his comments.

In September, he returned this time in an interview with Capital Xtra, questioning the use of Ghanaian slangs in Nigerian music.

“The speed at which I’ve moved is scary to me…cause it took my contemporaries 5, 6 years,” Eazi said.

“And that is what has been this year, if you want to count like 5 afrobeat, it’s like everybody just realized that ‘yo what formula is Mr Eazi using?’ Ok we’re gonna end up doing it. December last year almost 60% of Nigerian artiste were in Ghana playing shows”

“It’s just like an American artist just rapping about something in the UK, and you know he has no knowledge of it.”

The backlash was instant, with many Nigerians ‘disowning’ him on social media.

Global music force Yemi Alade​, kicked off the first leg of her Mama Africa World Tour in France, and it was amazing.

The Effyzzie Music singer sold-out the iconic Le Trianon, Paris; days before the concert which held on March 7, 2017. Armed with her Ova Sabi band and dancers, she delivered a electrifying 90 minutes set; performing songs from her arsenal of hits.

She also wowed fans by bringing out international saxophonist Jean Baptiste Moundele for “Na Gode”, afro R&B singer, Dil to sing the romantic duet “Temperature” and Marvin for the French version of “Kissing”.