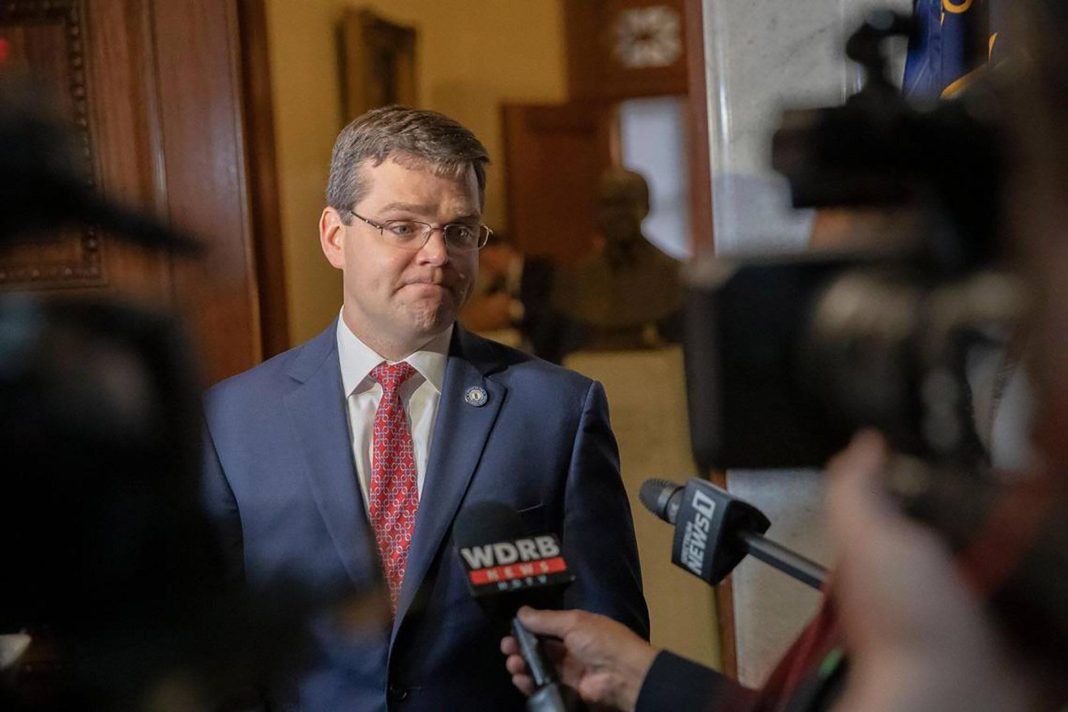 President Joe Biden’s reported pick for a lifetime federal judgeship in Kentucky is not only extremely anti-abortion, he would also operate a lot like conservative Supreme Court Justice Clarence Thomas and the late Antonin Scalia, according to his former boss.

Chad Meredith, who the Louisville Courier-Journal reported last week was Biden’s pick for a soon-to-be vacant U.S. District Court seat, “would be a strong and dependable conservative asset to the federal judiciary for decades,” according to a 2018 letter from Stephen Pitt, a general counsel to conservative former Kentucky Gov. Matt Bevin (R). The letter touted Meredith’s candidacy for a different federal court vacancy in Kentucky that year.

Meredith, who was deputy general counsel to Bevin at the time, would “adhere to the textualist and originalist viewpoint followed by the late Justice Scalia and by other justices, such as Justice Thomas and Justice [Neil] Gorsuch,” Pitt wrote in his letter to then-Senate Majority Leader Mitch McConnell (R-Ky.). “In sum, it is my opinion that the qualities I believe you think are most important in a federal judge are the same as I hold to. Based upon that belief, I can recommend Chad Meredith without reservation.”

Here’s a copy of the 2018 letter, which HuffPost obtained via an open records request.

McConnell aide Terry Carmack responded to Pitt at the time by saying he has “great respect for Chad,” according to an email included in the released records. Meredith was vetted for the position, but then-President Donald Trump chose another conservative lawyer to fill it instead.

The comparisons between Meredith and Justices Thomas and Scalia are likely to intensify calls on Biden to abandon his plans to nominate him. Not only would such a pick run counter to Biden’s much-touted record of putting forward diverse and progressive judicial nominees, but it would come on the heels of the Supreme Court gutting Roe v. Wade, a decision that breaks from 50 years of precedent and strips away the constitutional right to an abortion.

The ruling has devastated and infuriated Democrats, who are now scrambling to try to protect reproductive rights nationwide. Biden’s apparent decision to nominate Meredith, meanwhile, has raised questions about why a president who has insisted he would “do all in my power to protect” abortion rights would hand a lifetime judicial appointment to an ardent opponent of them.

“To be nominated tomorrow: … Stephen Chad Meredith: candidate for the United States District Court for the Eastern District of Kentucky,” the email from White House aide Kathleen M. Marshall said.

But the next day, the Supreme Court overturned Roe v. Wade, and the nomination did not occur.

A White House spokesperson on Wednesday did not respond to a request for comment on whether Biden is still planning to nominate Meredith.

White House press secretary Karine Jean-Pierre, meanwhile, tried to have it both ways when asked about Meredith, declining to comment on the problems with his potential nomination while boasting about the rapid pace and diversity of Biden’s other nominees.

“I do want to add and reiterate that the president is proud that we’ve confirmed more federal judges than during the last three presidents, presidencies, at the equivalent time in their administrations,” she said. “That includes so many history-making firsts to help our judiciary represent the diversity of America, including [a] groundbreaking new Supreme Court justice. And that is something that we’re going to continue to do, and we won’t stop there.”

“The president is making a deal with the devil and once again, the people of Kentucky are crushed in the process.”

Meredith certainly fits the mold of Trump’s court picks. He’s a member of the Federalist Society, the conservative legal organization that funneled anti-abortion, anti-LGBTQ and anti-voting rights judicial nominees to Trump’s White House for years. All six of the Supreme Court justices who voted to overturn Roe v. Wade are Federalist Society members, as were dozens of Trump’s nominees to U.S. appeals courts.

During his time as Bevin’s deputy counsel, Meredith defended a 2017 Kentucky law that forced abortion patients to undergo an ultrasound ― and doctors to show the patient an image and play audio of a heartbeat ― before they could have the procedure. He lost that case in a U.S. District Court, but the U.S. Court of Appeals for the 6th Circuit upheld the law in 2020. The two judges on the three-judge panel who voted to uphold the Kentucky law are Federalist Society members and were appointed to that court by Trump.

In 2019, Meredith and Pitt also defended Bevin’s decision to deny a license to Planned Parenthood that would have allowed it to perform abortions in Kentucky. The organization received the license only after Beshear defeated Bevin later that year.

Biden’s decision to nominate Meredith may have been part of a deal with McConnell to speed other Biden nominees through a deadlocked Senate, especially ahead of midterm elections that could cost Democrats control of the chamber. But it has drawn outrage from Kentucky Democrats and national reproductive rights organizations, who’ve questioned whether any deal would be good enough to hand a lifetime appointment to a conservative like Meredith.

Rep. John Yarmuth, the only Kentucky Democrat in Congress, said he “strongly” opposed the pick, and he told the Courier-Journal “the last thing we need is another extremist on the bench.”

“The president is making a deal with the devil and once again, the people of Kentucky are crushed in the process,” former Kentucky state Rep. Charles Booker, the Democratic nominee in this year’s U.S. Senate race, tweeted after the Courier-Journal’s initial report.

The National Women’s Law Center, NARAL, Planned Parenthood and other abortion rights groups called on Biden this week to drop Meredith from consideration.

“Chad Meredith should not be nominated to a lifetime judgeship,” the groups told the Courier-Journal. “This is unacceptable at any time, but especially on the heels of six Supreme Court justices taking away a fundamental right from millions of people.”