Beyoncé’s Road to Having Twins: From Her Epic Pregnancy Announcement to Her Babies’ Stealth Arrival

E! News has confirmed that the pop icon and husband Jay Z welcomed their second and third kids. The twins join big sister Blue Ivy Carterin the most royal of famous family folds, short of being actual royalty.

You’re probably wondering, aren’t they a little early? (As if Bey’s children could be persuaded to stay put when they’re ready to roll…) Well, their arrival is a little ahead of the late June/early July due date some people had settled on with their fancy guess work, counting down from when Mrs. Shawn Carter’s much analyzed, imitated and parodied pregnancy reveal on Instagram made everybody’s day on Feb. 1. But a source had told E! News that the twins were actually due by the end of this month.

Once again, nature works its wonders, and even the Carter family is at its mercy. Though if anyone’s going to whip up a little of her own mystery fog, it’s Beyoncé…

For instance, when she announced her pregnancy, resulting in a squeal heard round the tired world, at first glance it seemed like an otherwise innocuous day.

“‘4’ has been my favorite number since I was a kid,” Beyoncé revealed in her “Year of 4” feature. “It’s the number of my birthday, September 4, my mother’s birthday, January 4, my husband’s birthday, December 4, it’s the anniversary of my wedding [April 4].”

So while she didn’t care to wait till Feb. 4, wasn’t that Jedi mind math so much better?

But as her picture so definitively illustrated, there was only so much more time to go before people were going to catch on and not take silence for an answer.

Beyoncé was understandably pretty far along, close to five months, before she cradled her bump in a now-iconic orange dress and announced at the 2011 MTV Video Music Awards that she was pregnant.

Later she would reveal that she had suffered a miscarriage before getting pregnant with Blue Ivy, an experience that made her supremely cautious about sharing that sort of personal information.

Back in May 2013, when Blue Ivy was about 1 1/2, Bey said in an interview that aired on Good Morning America, “I would like more children…I think my daughter needs some company. I definitely love being big sister [to Solange].”

“And I am very protective,” she added. “I just want to make sure that she can have a healthy, safe, normal life…in the back of my mind, she’s my priority. And life is completely different now. So I’m—I feel really, really just lucky that I can still do what I love, and now have a way bigger meaning. And that’s to be her mother.” 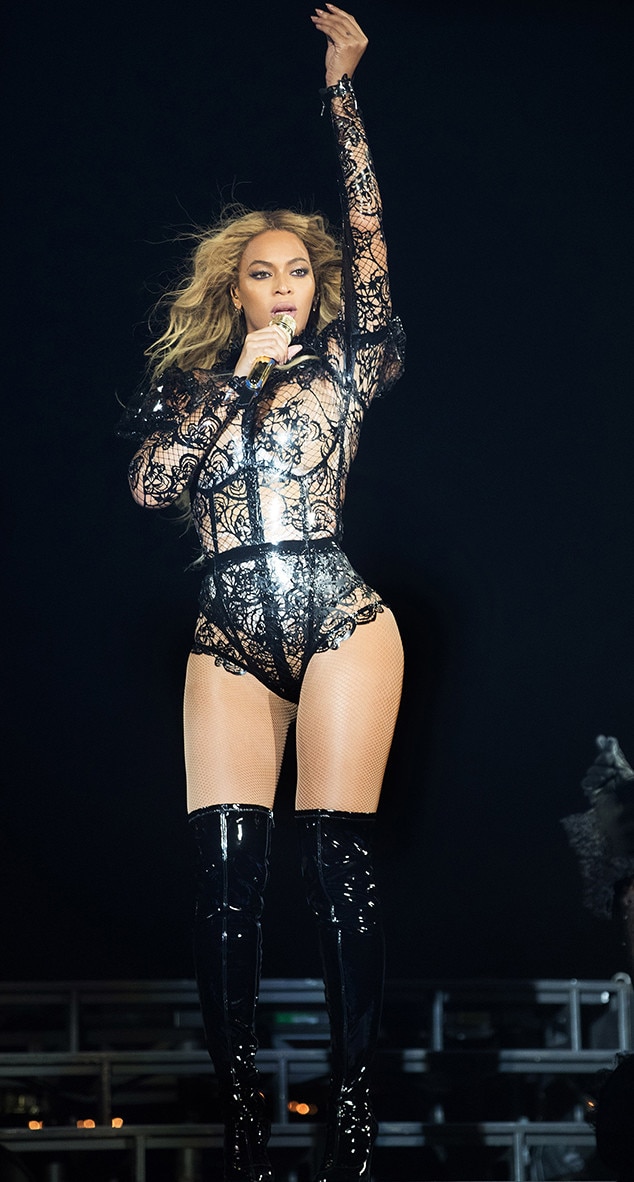 And while being Blue’s mom (and now, the mother of two brand-new babies) remains priority No. 1 in real life, since then Bey’s relevance to her fans and pop culture in general has taken on near mythical proportions, thanks to her creative growth and, more recently, her increased involvement in socio-political issues.

But with her unbelievably eventful 2016, which started off with her thrilling Super Bowl performance and then the momentous release of Lemonade, now behind her, it couldn’t be a better time to take some time off. (After she puts the first half of an already busy 2017 behind her, of course, which at the moment includes headlining Coachella in April.)

Meanwhile, she appeared to be at a similar stage in her pregnancy on Feb. 1 as she was when she announced she was pregnant with the baby that turned out to be Blue—so cue the microscope zoom on every picture of her taken during the prior five months as it dawned on people that she could have been expecting since as early as September.

She was on her Formation World Tour until Oct. 7, when she closed it out at MetLife Stadium in New Jersey.

Beyoncé’s flawless concert looks and perpetually in motion stage presence of course did nothing to indicate that anything other than blowing the roof off the stadium was on her mind—whether it was being pregnant or getting pregnant. 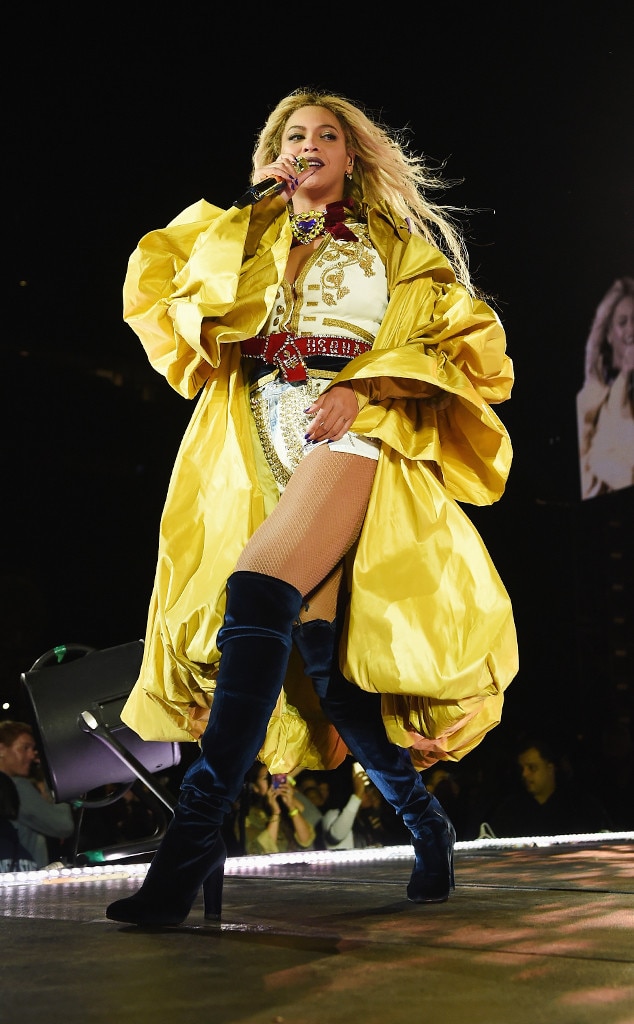 But Beyoncé just going about her everyday business would have also played a key role in her ability to keep people’s minds on her music (and the endless minutiae that fans are obsessed with on a daily basis regardless).

Being able to stick to her tour schedule as usual also had to rely on, in hindsight, a lucky confluence of circumstances, particularly Bey feeling well enough (not plagued by morning sickness, etc.) and having enough energy to bring it, night after night.

The Asbury Park Press gave her Oct. 7 show a rave review, singling out how she made her “wild dance numbers” and “belting out melodic power ballads” all look effortless.

And a month later, she was back on stage. 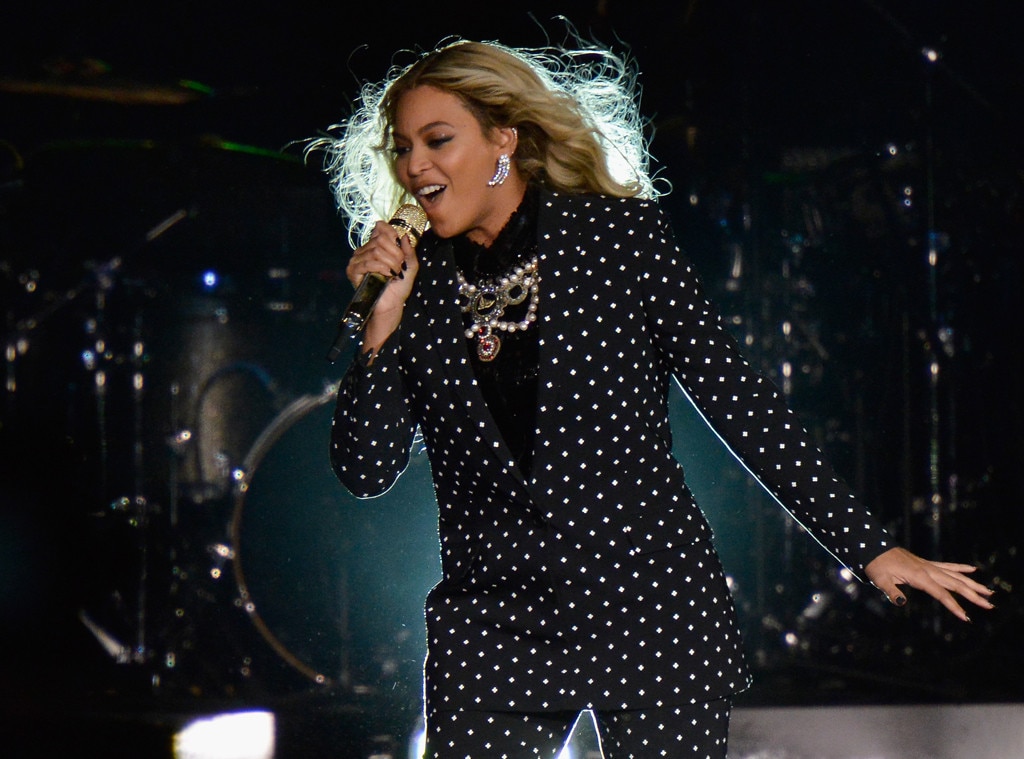 Two days later, she poured her heart into a surprise performance at Jay Z’s concert rally for Hillary Clintonin Cleveland.

Because she wanted to pay homage to Clinton’s uniform of choice, she wore an on-point polka-dot pantsuit.

“We have to think about the future of our daughters, of our sons, and vote for someone who cares for them as much as we do,” Bey told the crowd. “And that is why, I’m with her.” 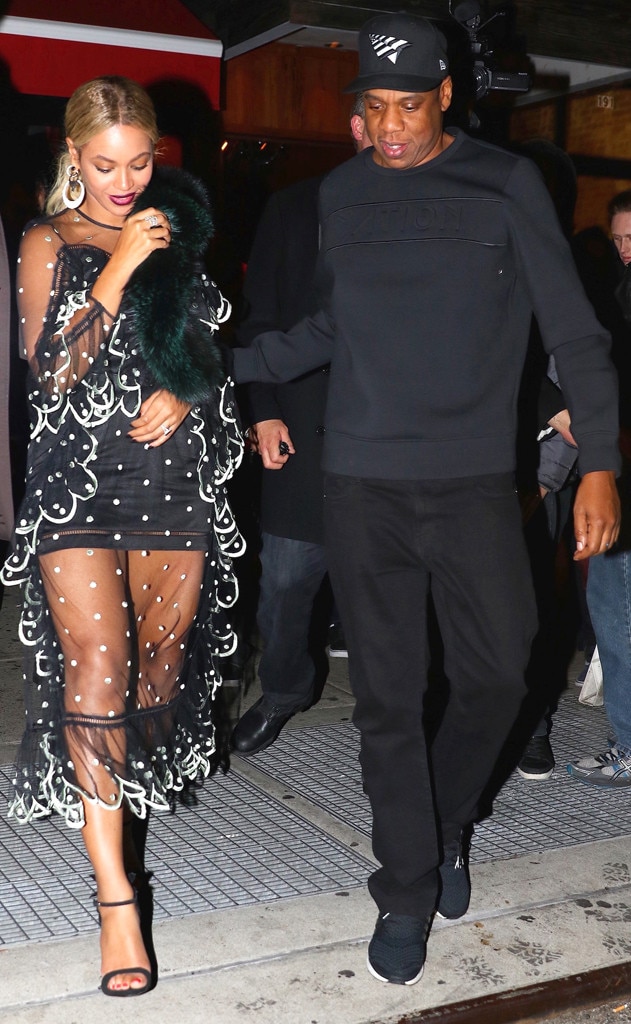 And just two days after that, in the wee hours of Nov. 6, Bey was photographed (after which she uncharacteristically Instagrammed the paparazzi pic) with Jay Z leaving the Saturday Night Live party after Solange had made her musical debut, and her hand is resting protectively on her stomach. Which, at the time could’ve meant anything, but now means…everything.

“Hand over the belly & the smile! How did we miss this,”ladyjsublime reasonably wondered today in the comments section.

Mom Tina Knowles helped keep the secret, too, when she shared video of a rather adorable moment among the Knowles ladies—Tina and Bey picking Solange up like a couple of kids on the playground on the SNL stage.

Before the pregnancy reveal, the last paparazzi sighting of Beyoncé had been in late November while she and Jay were eating lunch with Blue Ivy at Soho House—with what looked like actual lemonade on the table.

All the while, of course, Beyoncé’s no dummy. Whether or not she was purposely leaving little clues—as she did before serving up Lemonade—along the way, such as that one-two belly-pat-sly-smile combo, she knows that her personal life is always of the utmost fascination, and that even something as innocuous as carrying a purse or a laptop a certain way can trigger endless conspiracy theories.

So in order to take control of the situation, as Bey is wont to do with any situation, she had to make the announcement her way. First of all, the 2017 Grammys were fast approaching, and while stealing the VMAs’ thunder in 2011 was a perfectly appropriate move, Bey had too much reverence for the Grammys as an institution to show up in a way that would ensure no one would be thinking about anything aside from her babies on the way.

Moreover, if she hadn’t already been coolly set on Feb. 1 (i.e. 2-1-2-0-1-7) being the day, she might have been inclined to jump the gun after Jan. 27, when screengrab-savvy fans found a leaked video from her second Ivy Park campaign, in one frame of which she seemed to have a baby bump. Vogue officially debuted pics from the campaign on Feb. 1.

And while anything’s possible for a celeb (i.e. she could have a veil, a floral backdrop and just the right satin undies at her disposal within minutes at the drop of a text), it’s more likely she had been planning the reveal to be just so for some time.

So, with that out of the way, it was time for Beyoncé to just enjoy being gloriously pregnant, which she did to the fullest right away with a positively mesmerizing performance at the Grammys.

She may have lost out on Album (and Record, and Song) of the Year to Adele, but Bey couldn’t help but win the night anyway. Adele even seemed to have trouble accepting the night’s biggest honors, so torn up she was about 25 besting Lemonade.

“I adore you. You move my soul every single day,” Adele told Bey from the stage in accepting Record of the Year. “And you have done for nearly 17 years….And I want you to be my mommy.”

After the Grammys, Beyoncé continued to relish  being out and about, just like any other expectant mom waiting for her babies to be born. In addition to periodic maternity photo shoots, she and Jay Z celebrated their ninth wedding anniversary, they went house-hunting (or hired someone to go house-hunting), took in a Clippers playoff game courtside, arranged a private Easter egg hunt for Blue Ivy at the Beverly Hills Hotel and enjoyed a Mother’s Day trip to the Museum of Ice Cream, L.A.’s latest celeb-family haunt.

Sure, she had to give up a few things due to the timing of her pregnancy.

She skipped the Met Gala for the first time in a while, and she had to postpone her headlining spot at Coachella until next year, much to many ticket-holders’ consternation. But she won a Peabody Award last month for Lemonade and announced the formation of the Formation Scholars scholarship program for the 2017-18 school year, to be awarded to four young women pursuing higher education in the arts, music, literature or African-American studies.

As always, affecting the culture even in absentia.

And her party schedule did remain packed in a family-friendly way: Bey was out celebrating Cinco de Mayo with Kelly Rowland, and a few weeks later family and friends, including Kelly, Michelle Williams and Serena Williams, gathered for her baby shower in Beverly Hills, aka the “Carter Push Party.” Most recently she enjoyed Memorial Day poolside with Blue Ivy, both mother and daughter in the chicest of swimwear.

Jay Z caught Game 1 of the NBA Finals in Oakland with Kevin Hart and other pals on June 1, after which he jetted right back to L.A. You know, to ensure he didn’t miss any important life events or anything.

Long story short, what all of this really amounts to is a heartfelt congratulations to the entire Carter family, now officially the Phenomenal Five.