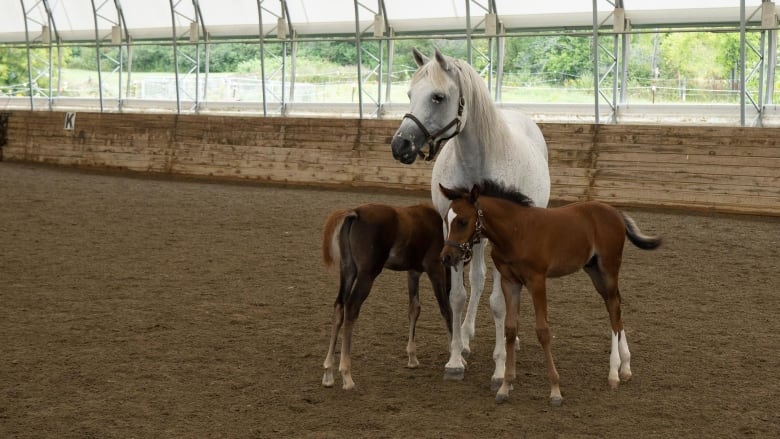 It was late in the evening of June 27 when things took an unexpected turn in the stables of the Avant-Garde Farm in Luskville, Que.

Arabian mare Essie was foaling earlier than anyone expected and co-owner Siri Ingebrigtsen was out of town on business.

Left to deal with the sudden turn of events was 19-year-old student Arianne Fournier, who was on duty just in case.

But she had the guidance and support of veterinarian Andrea Kelly, who, through Facetime, walked Fournier through the successful delivery of healthy twin foals.

“I don’t think I would have been quite as calm (without her),” recalled Fournier.

Kelly came out the next day and in the days and weeks afterwards, to check on — and cuddle — foals Star and Blaze.

July 28 was the last time people at the farm saw Kelly. The 36-year-old took her own life three days later.

“A friend called me,” recalled Ingebrigtsen. “She said ‘maybe you should sit down’ and she told me what had happened.”

“It was so surreal. You don’t expect these things …. You always think ‘what could we have done differently as a community to prevent this? and what can we do differently (so) we don’t lose another vet like this?'” said Ingebrigtsen, who knew another veterinarian who died by suicide.

Since Kelly’s death, the Pontiac and Ottawa equine community has rallied together to highlight her impact as a veterinarian, community member and friend.

Some clients wrote tributes online, others shared memories from their friendship with her.

One friend dedicated a sunflower field to Kelly. Another entered her horse into the Rideau-Carleton Raceway on Aug. 11, and took home the winning title in honour of Kelly and her family. The winning horse, Erica’s Shadow, even raced sporting a purple bib, Kelly’s favourite colour.

Kelly’s sister, Erin, says she is touched by all the tributes.

“She always followed up when she said she was going to. I heard stories about how gentle and tender and caring she was in an animal’s last few minutes,” she said.

The community sharing their stories with Kelly’s family “really helped us through this difficult time.”

Andrea Kelly was unusual in that she was an Ottawa-based veterinarian who was also licensed to practise in Quebec. She owned the Ottawa Valley Large Animal Clinic and served close to 600 clients in the Pontiac and Ottawa surrounding area.

‘A strong and determined person’

Erin Kelly remembers her younger sister as a “bright smiley little kid” who fell in love with horses and was determined to become a veterinarian. She bought the Ottawa Valley Large Animal Clinic in 2018.

Five years before that, in 2013, she met Marc Alarie, who became her fiancé.

Alarie has a vivid memory of bumping into Kelly at a grocery store not long after their first date.

“She was wearing her overalls, she had stains on it, her hair was everywhere and she smelled like a barn so she was a little shy,” Alarie said with a laugh. “But when I saw her she was still beautiful and real.”

In the years that followed, Alarie and Kelly lived in a home in Kemptville and built a life together with their horses, cats and dog.

Alarie recalls how Kelly did her job “seriously and with compassion.” He came home once to find a goat, kept there for some special medical attention.

Farther afield, Quebec horse owners were happy to have Kelly as a resource.

“She quickly started coming into our area because she was licensed to come to Quebec which many of the vets in Ontario are not,” said Stephanie Sitzberger, a Gatineau farm owner. “We were able to develop a really nice relationship with her.”

She said Kelly “was always smiling, no matter what kind of day she was having”.

But as Siri Ingebrigtsen looks back on all the patients under Kelly’s care in Quebec and Ontario, she says the vet’s job must have been stressful.

“I don’t know how any of them do it honestly, especially being on their own because there is no one to bounce things off and to help you when you have all weekend on call,” said Ingebrigtsen. “But she never let it on really when she came.”

Erin Kelly says her sister always put the clients first and was not “one to leave the animals without care,” even when it may have affected her.

“Andrea was a strong and determined person … but being on call 24 hours per day, seven days per week is demanding,” she said.

Erin says a shortage of veterinarians and the departure of two employees left her sister pretty much alone to handle a large client load.

“She ended up taking a lot of that on herself so that the clinic would survive and that those 600 clients would have care,” said Erin.

Experts say the life of a vet, with its particular stressors, is not an easy one and the profession has elevated rates of suicide. However suicide is rarely caused by any single factor, experts also say.

High rates of suicide among veterinarians

Following Kelly’s passing, her family asked for donations to be sent to Not One More Vet, (NOMV) a non-profit organization based in the U.S. that aims to advance wellness, mental health and the reduction of suicide among veterinary professionals.

Long working hours, client-veterinarian boundaries and stress all play into the elevated rates of suicide among veterinarians, says NOMV vice-president Caitlin Furlong, who works at an equine veterinarian clinic in New Jersey.

She said one in six veterinarians in the U.S. considers suicide at some point in their career and that “veterinary professionals are at a higher risk than the general public.”

Here in Canada, the statistics are equally worrisome.

Around 26 per cent of Canadian veterinarians have experienced suicidal thoughts in the last 12 months, reported a study published in 2020 conducted by researchers in The Ontario Veterinary College.

In the last two years, the welcoming sessions for new students have changed to reflect this concern. Now students are provided with well-being resources through a new course offered by the American Association of Veterinary Medical Colleges.

“We really strongly encourage our students to do (this),” said Archambault. “And we know that veterinarians are more than twice as likely to have suicidal thoughts compared to Canadians.”

“I think what really distinguishes large animal veterinary medicine from small animal (medicine) is the amount of hours we have to put in,” said Harvey.

Andrea Goffart, a client of Kelly’s who owns property in Quyon, Que., says clients can also add a level of stress to veterinarians.

“Horses are an interesting animal because they’re not really livestock and they’re not really pets,” Goffart said. “People are very fond of their horses and if something goes wrong there is a lot of anger that is directed towards vets.”

Goffart says not all clients understand the pressures that vets feel, especially when they are dedicated to their work and in high demand because of the shortage of veterinarians.

“They don’t want to say to that owner ‘sorry I can’t see your horse,” Goffart said. “I think somebody who gives and gives and gives, at one point they are going to burn out.”

‘If only she knew how many people she touched’

Kelly’s family held a memorial service at her veterinary clinic and her fiancé says about 250 people came out to remember her.

Alarie was touched to see what an impact she had on the community.

“The messages online and the people that came yesterday, the cards, the flowers that we received from clients, from friends… If only she knew how many people she touched and how many people loved her and cared about her,” said Alarie.

“She meant a lot to us and we’ll make sure that we remember her forever.”

As for Ingebrigtsen, every time she looks at the foals that Kelly helped to deliver on Facetime, she feels a pang.

“It’s been a tough few weeks, yet at the same time we’re kind of celebrating who she was, right. And these guys will always remind us,” Ingebrigtsen said.