Behind Trump’s Texas Show Of Force, A Weakened President 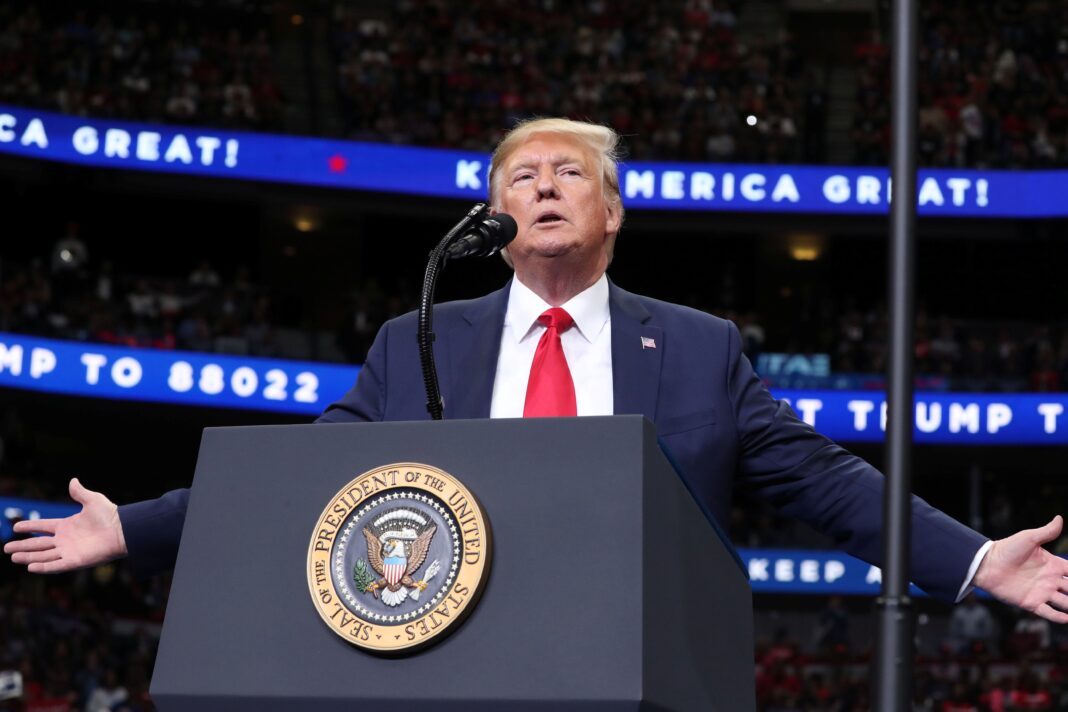 DALLAS ― President Donald Trump brushed off impeachment concerns, railed against Democrats and promised to deliver a resounding victory in the 2020 election at a rally here Thursday attended by thousands of cheering supporters.

A sea of red hats and shirts calling for “liberal tears” and “Trump 2020: No more bullshit” flooded downtown Dallas ahead of the rally. Thousands of supporters came, with some arriving two days early. Volunteers collected signatures for a petition demanding an end to the impeachment inquiry in the House of Representatives.

“They should stop the impeachment because the president is doing a great job,” said Alan Bewley, a Trump supporter who lives on a country road 90 minutes outside Dallas.

“They want to impose an extreme agenda,” Trump said of the Democrats. “They cannot pass it and they cannot win it at the ballot box. They won’t come close in 2020. They know it ― they’re not going to win it… It’s going to be a landslide.”

But behind Trump’s show of force lies lackluster polling numbers, a weakening Republican Party and uncertainty about whether the president is more of an asset or a liability for the conservative control of the country’s largest red state.

Dallas itself is a Democratic stronghold, so Trump’s visit offered a moment for the president to connect with supporters in the surrounding suburbs and rural areas, where he remains popular. But Democrats are gaining on Republicans across Texas. They sharply narrowed the statewide gap in last year’s midterm election, led by O’Rourke’s near-miss Senate campaign. Republicans’ margin of victory in that statewide race was not the double-digit thumping they’re used to here. Sen. Ted Cruz held on to his seat in a less-than-3-percentage-point squeaker, and the power of the far-right dwindled in the Statehouse.

O’Rourke’s campaign hinged on the use of Trump as a foil.

“Trump is without question the worst thing that has happened to the Texas Republican Party in the last 20 years,” Rice University political scientist Mark Jones said. “He single-handedly turned Texas from a red state to a pink state.”

Some Texas Republicans have echoed that theory behind closed doors. “With all due respect to Trump, who I love, by the way, he’s killing us in the urban-suburban districts,” Texas House Speaker Dennis Bonnen said in a private meeting in June, according to secretly recorded audio released this week.

“The only reason Donald Trump is in Texas tonight is that he knows he will lose the state and lose this election,” Texas Democratic Party Chairman Gilberto Hinojosa said in a statement. “Several polls show Trump losing Texas to top Democratic contenders. Donald Trump is terrified.”

Trump carried Texas in 2016 by 9 percentage points. But 48% of Texas voters said they definitely wouldn’t vote for Trump in 2020, according to a Quinnipiac poll released last month, compared with 35% who said they’d definitely support him. Other surveys have shown leading Democrats within the margin of error in head-to-head matches with Trump.

Texas leaders who joined Trump, however, offered full-throated support and cast aside concerns that the state could flip as an invention of the media.

Texas Lt. Gov. Dan Patrick urged the crowd to boo O’Rourke repeatedly and excoriated the “progressive left” as “our enemy.” Patrick bragged that the president would draw more people to the portable toilets at his rally than O’Rourke would draw at the counter-rally in nearby Grand Prairie.

Thursday’s rally marked Trump’s second major political event this year. He also held a major rally in El Paso back in February aimed at drumming up support for his proposed border wall and to take jabs at O’Rourke after his Senate run. He also visited in April for fundraising.