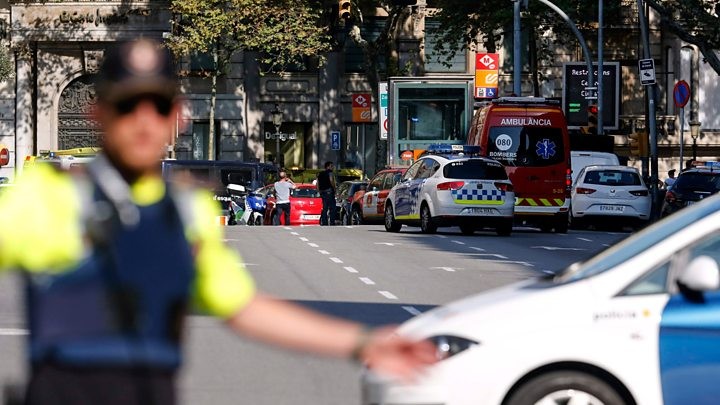 At least one person died and 32 were injured after a van ploughed into crowds in Barcelona’s famous Las Ramblas tourist area, police say.

The vehicle sped along the pedestrianised area, mowing down people and sending others fleeing for cover in shops and cafes.

Witnesses said the van had deliberately targeted people before coming to a stop.

Police are treating the incident as a terrorist attack.

Media reports said the driver of the vehicle had fled on foot.

Tom Markwell from New Orleans, who was just arriving in a taxi in Las Ramblas, said: “I heard a crowd screaming. It sounded like they were screaming for a movie star.

“I saw the van. It had already been busted on the front. It was weaving left and right, trying to hit people as fast as possible. There were people lying on the ground.”

Aamer Anwar said he was walking down Las Ramblas, which was “jam-packed” with tourists.

“All of a sudden, I just sort of heard a crashing noise and the whole street just started to run, screaming. I saw a woman right next to me screaming for her kids,” he told Sky News.

“Police were very, very quickly there, police officers with guns, batons, everywhere. Then the whole street started getting pushed back.

“Police officers who got there just started screaming at people to move back, move back.”

Vehicles have been used to ram into crowds in a series of attacks across Europe since July last year.

Are you in the area? Did you witness what happened? If it’s safe to do so, you can share your experience by emailing haveyoursay@bbc.co.uk.