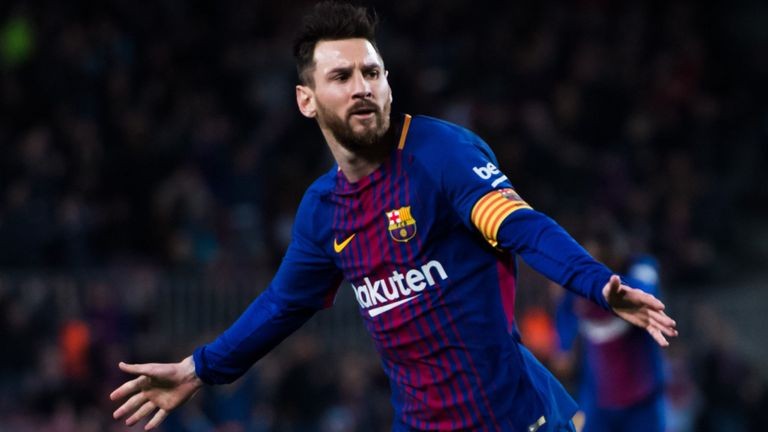 Lionel Messi netted a hat-trick as Barcelona beat Leganes 3-1 at the Nou Camp to make it a record-equalling 38 games unbeaten in La Liga.

Barcelona cruised to victory that saw them equal Real Sociedad’s streak across 1978/79 and 1979/80, and move seven games away from the first unbeaten La Liga season in history.

Messi did the damage in the first half, curling home a sublime free-kick in the 27th minute – his sixth goal directly from a free-kick this season – before firing in a second five minutes later.

Barcelona took their foot off the gas in the second half and they were caught cold when Nabil El Zhar got Leganes back in the 68th minute, but Messi made sure of the win three minutes from time as he completed the hat-trick to take his tally to 39 goals in all competitions this season.

Man of the Match: Lionel Messi.

The result sees Barcelona continue their march to the title, with the gap at the top now 12 points ahead of Sunday’s Madrid derby, live on Sky Sports.

Barcelona started the game on the front foot, and should have gone ahead in the 20th minute, but Luis Suarez was denied by a brilliant stop from Leganes goalkeeper Ivan Cuellar.

The Nou Camp did not have to wait much longer for that opener though as Messi stepped up to curl a free-kick into the net from 25 yards, leaving Cuellar with no chance.

Barcelona started with Lionel Messi, Luis Suarez, Ousmane Dembele and Philippe Coutinho as a dynamic front four. As expected, Sergio Busquets missed out, after coach Ernesto Valverde insisted he wouldn’t be risked. Four changes in total for Barca from the team that beat Roma in midweek, with Andre Gomes and Thomas Vermaelen also coming in.

Five minutes later and it was two, with that man Messi picking up the ball from Philippe Coutinho, holding off his marker before firing home his 28th league goal of the season.

Leganes gave Barca a scare just after the interval with substitute Claudio Beauvue heading over from a good position, before Gerard Pique missed a glorious chance to make it three, ballooning a close-range effort over the top.

Suarez again missed a good opportunity to get on the scoresheet as he couldn’t find the target from close range, and that miss proved costly as Leganes broke and got themselves back in it through El Zhar, whose strike from the edge of the box found the bottom corner, via a slight deflection.

Barca remained in control, though, and Messi made sure of the three points at the death, controlling the ball brilliantly on his chest before flicking the ball into the net.

Man of the match – Lionel Messi

What is left to say about Messi? His goals were all brilliant in their own way. Six goals directly from free-kicks is an incredible return in less than one season. His desire to keep scoring goal after goal sets him apart, as well as his incredible ability, of course.