Bachelor in Paradise Finally Made It To a Rose Ceremony: Who Went Home? 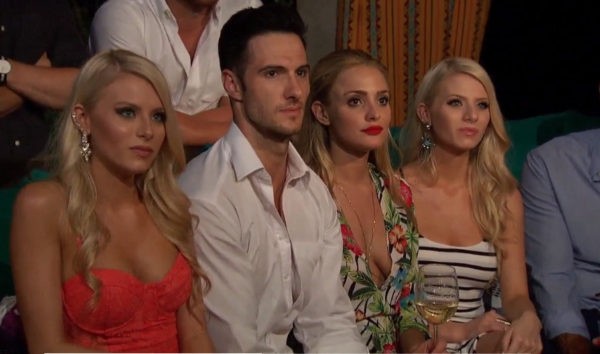 We went into tonight’s Bachelor in Paradise thinking of only one thing: Mashed potatoes.

Mashed potatoes have nothing to do with Bachelor in Paradise, but we’re just being honest here. After a long day of eclipsing and waiting for Trump speeches or football to quit interrupting our beach time, a nice big bowl of garlic mashed potatoes is exactly what we needed.

While we waited for it to arrive (yes, we ordered mashed potato delivery), we watched sandy confusion unfold on TV.

First of all, Adam arrived, with no AJ in tow. He set his sights on Raven, which sent Ben Z’s head spinning. He and Raven both have dogs! They belong together!

While Raven and Adam had a perfectly nice but not entirely chemistry-filled time on their date, Ben was so sad on the beach. So. Sad. He wandered around with his head down, bemoaning worst case scenarios like Raven and Adam falling in love.

Raven came back confused. She had a good time with Adam, but Ben Z is a good guy! What’s a girl to do? (Ben Z, honestly.)

Finally finally finally, it was time for the first rose ceremony of the season, after a very rainy cocktail party. Amanda got to know sweaty, bow-tied, white pantsed Robby, Raven continued to be tortured by the Adam vs. Ben Z decision, Jasmine fawned over Penguin Matt, Iggy tried his embarrassing best, and our mashed potatoes arrived.

The potatoes kindly distracted us from Alex’s attempts to recoup his Paradise spot after Amanda informed him she was not giving him a rose. Sorry Alex, but no. Shhh. Noooo.

We did, however, manage to look up while Dean finally said some words to Kristina. The words were weird. He’s getting a vibe from her that things are weird, but from what we’ve seen, Dean was the one causing the weird by acting like a teenage boy. He wants to keep getting to know Kristina, but also doesn’t? Boys are confusing.

Iggy, Alex, Vinny and St. Nick all said their goodbyes, and it was only half sad.

Up next, Danielle L. arrived, supported by much tape. We had quite honestly forgotten about Danielle L., but apparently she’s the hottest creature on the planet.

Anyway, Dean was really into D-Lo (the nickname they’re forcing on us, apparently) regardless of Kristina. He excitedly accepted Danielle’s date because he’s a child who’s attracted to pretty things and ATV rides, and Kristina was beyond pissed.

Dean tried to apologize, but then he went off to fake laugh on that ATV ride, where he learned that Danielle’s birthday is December 28.

“Here’s to getting super dirty!” she giggled later, with a giggle, and Dean admitted Danielle was the only girl whose hotness he knew of before joining the franchise. Meanwhile, Kristina lamented the badness of boys on the beach.

Dean, Danielle, and Danielle’s weird capris returned all smiles, and while Kristina huffed off, Penguin Matt told Dean that it was “good enough” that he felt bad.

Dean then went to awkwardly talk to Kristina to tell her he and D-Lo had a “little peck” on their date, and that their conversation had a good “ebb and flow.” But somehow, by the end of their awkwardly quiet talk, they were giggling and pinky promising each other things. They’re cute, even if Dean can be a dingbat sometimes.

And then Dean turned his dingbattery all the way up to 11.

He showed up to a group hang out with a goddamn piece of cake, explaining that when your birthday falls between two major holidays, you’re supposed to celebrate it on your half birthday, so happy half birthday to D-Lo!

A hush fell over a the group. We gasped. Kristina broke down into some VERY REASONABLE TEARS, and Dean officially joined the ranks of some of the dumbest men who have ever appeared on reality TV. And the worst part of it all is that he’s still so stupidly lovable. Dean! Stop this! Stop it now!

Anyway, our kingdom for more of Alexis and Jasmine bashing former Bachelors and performing musicals in the hot tub. Those ladies almost make this worth it.

Bachelor in Paradise airs Mondays and Tuesdays at 8 p.m. on ABC.