B.C. winemakers in good spirits about 2021 vintage despite summer of fire and extreme heat 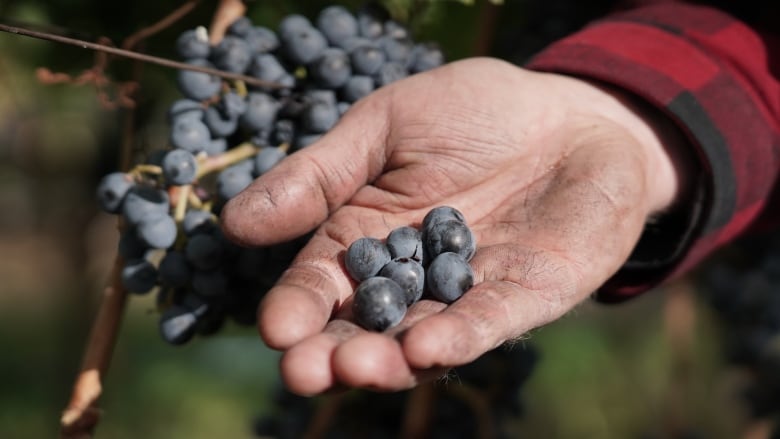 Grape growers in B.C’s Okanagan region are looking at reduced yields of up to 30 per cent as workers bring wine grapes from the vineyards during the annual fall harvest.

While an unprecedented summer of record-breaking heat and extreme drought conditions has contributed to the smaller wine grape crop, those same growing conditions have helped yield fruit that winemakers are especially excited about.

“I’m very optimistic about what’s going to come out quality-wise for 2021, in spite of all that Mother Nature threw at us this year,” said Barclay Robinson, head winemaker at Road 13 Vineyards, in Oliver, B.C.

“I’m seeing fantastic flavours across the board in our whites and our rosés and then the reds that are coming in right now.”

The winery and its vineyards are located on the Golden Mile Bench, a sub-wine region in British Columbia on the western slope of the Okanagan Valley, south of Oliver.

Temperatures reached into the high 40s C for multiple days in late June — a crucial time in the growing season as grape vines move from flowering to fruit set.

“With that much heat, the plant just basically shuts down, Robinson said. “It’s not ripening, it’s not growing because it can’t pull up water and nutrients out of the ground at all.”

The heat stress led to poor fruit set — which occurs when a fertilized flower begins to develop a seed and grape berry — and reduced yields in some varieties.

According to Wine Growers British Columbia, yields are down 15 to 30 per cent this year.

Continuous warm weather through the summer — coupled with drought conditions in the region — resulted in smaller berries on grape vines but a strong concentration of flavour in the fruit, Robinson said.

“That concentration of flavour is going to give fantastic wines for 2021,” he added.

A few kilometres away, Balwinder Dhaliwal is also anticipating an excellent vintage from this year’s crop, despite lower yields.

Dhaliwal grows about 200 hectares of wine grapes, which he sells to wineries across the Okanagan and uses to make wine at his family’s Kismet Estate Winery.

“Mother Nature this year helped the wineries,” he said. “I think this is the best vintage since we’ve been doing this, almost 25 to 30 years.”

Red wine grape varieties such as Malbec, Cabernet Sauvignon and Shiraz especially benefited from the hot and dry summer, Dhaliwal said, noting that the concentration of flavours will light up customers’ pallets in wine-tasting rooms.

“People that know wine and love wine, they definitely can tell the difference this year,” he said.

Growers across the Okanagan are reporting similar stories of lower yields but high-quality wine grapes as they bring in the harvest from vineyards, said Miles Prodan, CEO of Wine Growers British Columbia.

The Okanagan Valley, stretching across more than 250 kilometres, is home to 86 per cent of B.C.’s vineyard acreage.

This past summer, the valley was blanked in smoke for days on end from the many wildfires burning in the region.

Fire smoke can taint the flavour of wine when airborne compounds from burning trees and soil settle on grapes still on the vine.

Prodan said he’s not hearing from winemakers that they’re worried about fire smoke tainting the wines in 2021 vintage.

“The interesting thing about the smoke taint is it really varies on the concentration of the smoke, where the smoke originates from and what step in the growth process the grapes are on,” he said.

A fire burning next to a vineyard, with ash falling on the vine and grape clusters, is much more worrisome than smoke just hanging in the air throughout the valley, Prodan said.

Winemakers also have ways of dealing with smoke compounds during and after fermentation, Robinson said.

“At Road 13, we didn’t see such extreme smoke taint that it would affect not bringing in a vineyard block, so ours were very mild cases,” he said.

“It’s something that we can definitely work with and still get a very good quality product, for sure.”