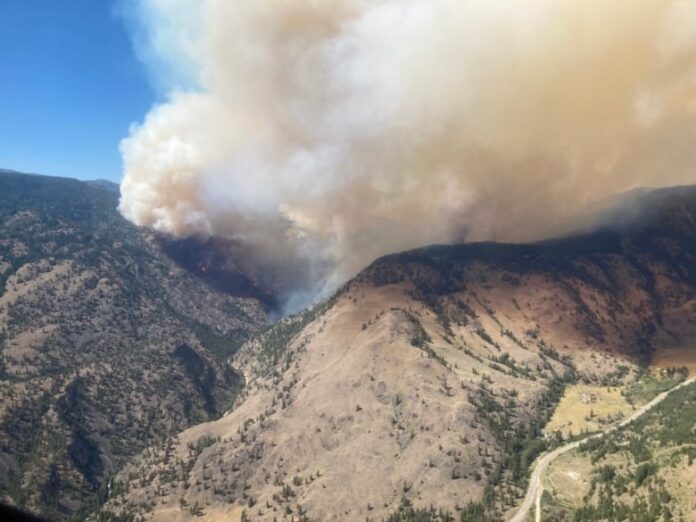 Officials are urging British Columbians to be mindful of the wildfire risk, even as the biggest fires in the province remained stable Sunday.

The most concerning fire in B.C. remains the 4.4-square-kilometre Keremeos Creek wildfire, southwest of Penticton, in the southern Interior.

It’s confirmed to have destroyed one structure and is classified as an “interface” fire, meaning it is deemed a threat to community infrastructure.

“It’s good news today, the fire wasn’t moving as much since it started,” said Chief Greg Gabriel, of Penticton Indian Band, in a phone interview Sunday evening. “We had very minimal winds today.

“But the fire is in a bad area, where it’s causing a lot of challenges to actually attack the fire. It’s a real steep … rocky area in a tight valley.”

The fire is mere kilometres from the edge of the First Nation’s reserve boundary, he said.

On Sunday morning, B.C.’s wildfire service took a community elder to view the fire in a helicopter and identify important cultural sites at risk; Gabriel said two such sites had been burned.

However, on Sunday evening, the B.C. Wildfire Service said that minimal growth was observed and the fire remains its estimated size from Saturday. The fire is located 21 km from Penticton and is slightly larger than the size of Vancouver’s Stanley Park.

“Right now there’s a bit of an inversion that is keeping the smoke sitting quite low in the valley, which is preventing some of our aerial resources from operating safely on the fire line,” said Aydan Coray, a fire information officer, on Sunday morning.

“Once that inversion kind of breaks and we get a little bit more visibility in the valley, we’ll have additional helicopters joining throughout the day.”

More than 40 firefighters are working on the fire, which started Friday. Coray said high temperatures would continue to challenge firefighters on Sunday, though a gradual cooling trend is expected to begin early next week.

She said it is difficult to predict which direction the fire might grow on Sunday.

“We expect some winds to come in, which is going to probably present more problems,” Gabriel said. “It’s still a going concern. I’m hoping tomorrow we’re able to make some progress and get a handle on it.”

The evacuation alerts issued by the Regional District of Okanagan-Similkameen cover the nearby Apex Mountain ski resort, which is located northwest of the fire.

James Shalman, general manager of the resort, said people at the establishment are “optimistic” about the fire behaviour on Sunday, and that wind conditions mean smoke isn’t yet visible from the resort.

He said the resort has a wildfire plan that’s been in place for over 30 years and involves using snow machines to mitigate the fire.

“We’re one of the few mountains that has snowmaking from the top of the mountain to the bottom of the mountain and throughout various runs,” he said. “What we’re doing is putting our snowmaking guns in strategic areas that could potentially help us if the fire does come our way, that’s another line of defence.”

He said about four staff members are working to get everything in place, with the resort ready to “flip a switch” if they need to.

“Wildfires … are a threat and they’re a hazard,” he said. “It’s always top of mind. And we’re always a little bit nervous and always thankful when we get through the summer without one.”

No campfire bans in place

The Nohomin Creek wildfire, about 1.7 kilometres northwest of Lytton, B.C., saw growth Saturday in high-elevation areas due to hot and dry conditions.

It is roughly 29 square kilometres, which has not changed significantly over the weekend.

The wildfire service said helicopters bucketed the blaze steadily during the day, while rocky slopes and sparse fuels slowed its growth in certain areas.

Donna MacPherson, a fire information officer, said the service had appropriate resources to fight the fires around the province.

Despite an uptick in fire starts after a week of extreme temperatures, MacPherson said the province is in much better shape compared to last year.

Despite the favourable comparison to last year’s devastating season, MacPherson urged people in the backcountry to be cautious.

No campfire bans are in place in the province, though large open fires are prohibited. A small campfire means keeping fires under half a metre high and wide, and keeping water or a tool close by to keep them under control.

“Right now we’re allowing those types of fires, but it’s very small, controlled campfires. I wouldn’t be surprised if that will change … though,” MacPherson said. “Because we’ve had that period of very hot, dry weather, we are anticipating that we may have some [bans] come in place in the next week.”