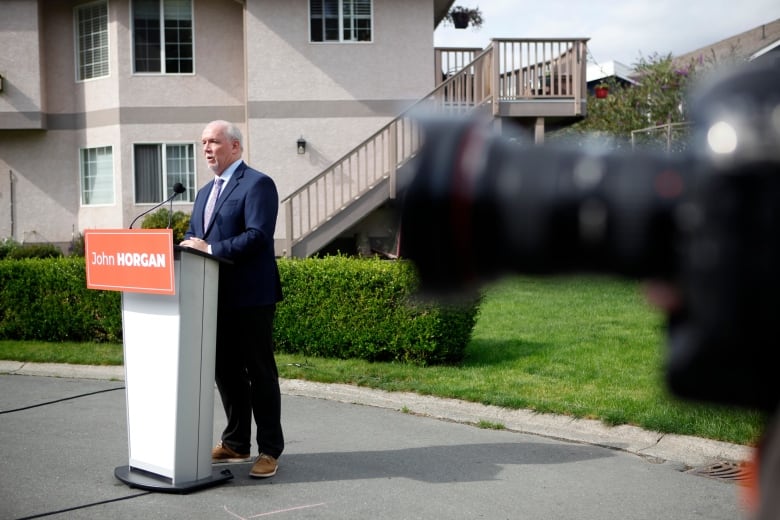 In a year of world events nobody wanted, British Columbians will be getting an election almost nobody wanted.

“Families are concerned,” admitted NDP Leader John Horgan at the beginning of a news conference outside his Langford home, in front of a lacrosse net and some garbage cans, announcing B.C. would head to the polls amid a pandemic.

“I have grappled with this,” he said at another point.

“I understand absolutely that there’s anxiety,” he conceded during another question.

Outside of the most diehard of NDP partisans, few people greeted Horgan’s announcement of a snap election with much enthusiasm. After all, it comes while parents are still figuring out schooling in a COVID-19 world and as the calendar hurtles toward influenza season — all while COVID-19 cases are higher than they’ve ever been in the province.

But Horgan doesn’t need people to be excited about an election.

He just needs enough of them to believe he’s the best person to run British Columbia for the next four years.

And on that front, he has plenty of advantages.

The NDP has raised plenty of money for a campaign, has announced a wide range of star candidates in the last two weeks and starts the campaign with the party and its leader riding high in the polls.

It’s a party that can say it fulfilled the vast majority of its promises, in a province where no party has suffered a defeat after one term since 1975. If he wins, he would be the first NDP leader ever re-elected in the province.

The other parties face tougher challenges.

The opposition Liberals have yet to capture the public’s imagination under leader Andrew Wilkinson, who has been forced to apologize for dismissive comments about renters and domestic violence. With COVID-19 dominating headlines for months, his attempts to rebrand the party as younger and more diverse have taken a back seat.

Meanwhile, the B.C. Green Party is just one week removed from electing Sonia Furstenau as its leader and will be playing catchup with the two bigger parties for money and candidates for at least a couple of weeks.

It might explain why the Liberals and Greens spent more time Monday attacking the necessity of an election, rather than articulating their own vision or critiquing three years of policy choices by the government.

And it might explain why at Monday’s election announcement, one reporter prefaced their question to Horgan by saying it was an election he was “sure to win, or likely to win.”

It’s the uncertainty of the pandemic and the optics of calling a snap election that may be Horgan’s biggest foe, not Wilkinson and Furstenau.

“The hope of the NDP is they deal with the question of whether they should have called this election in the first week, and then people tire of the question,” said University of British Columbia political scientist Gerald Baier.

“I think he’s counting on that to be the case, but you can’t predict what the virus will do.”

On Monday, as B.C. surged to a record-high 1,987 active confirmed COVID-19 cases, Horgan made only the slightest nods to the fact that the election ultimately was about his party’s self-interest.

“We are involved in politics,” he said when asked bluntly if the election was a power grab.

“We have been involved in politics for the past three-and-a-half years … but the challenges ahead of us are unprecedented and I believe stability is what’s required.”

Stability after an election, mind you.

Ultimately, Horgan and his party believe enough supporters will give him a pass on an election call because they value the stability offered by a NDP majority for the next four years.

Then the unkempt garbage cans behind Horgan as he called the election could become symbolic of a mess of his own making.