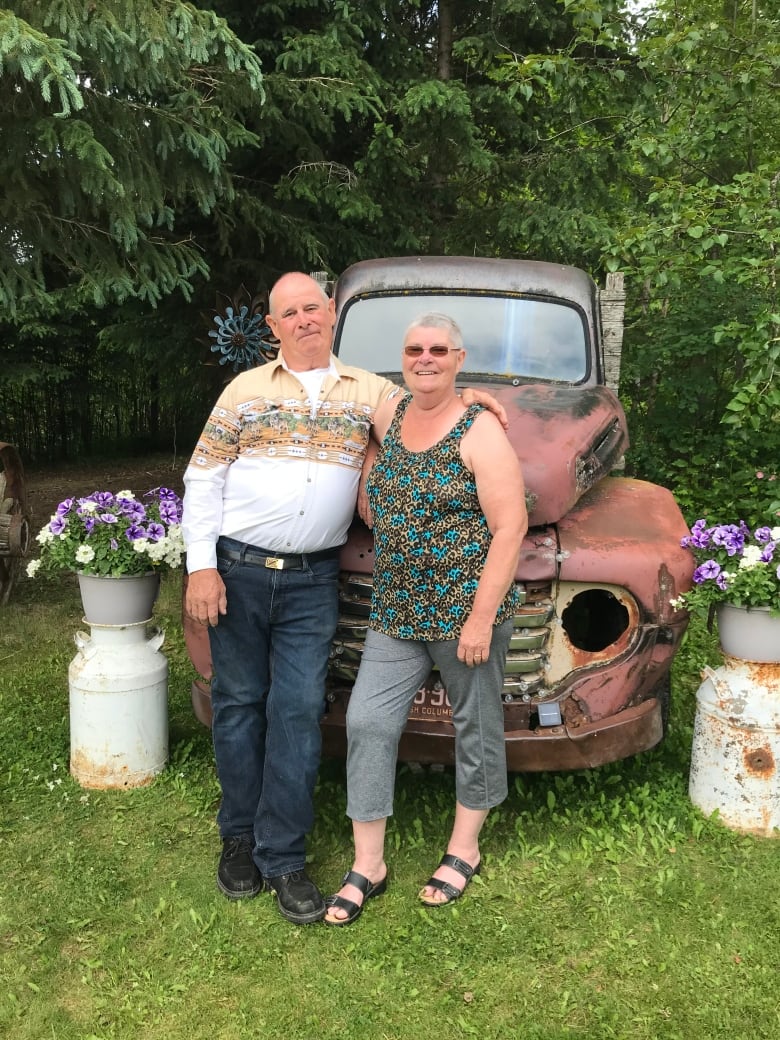 A B.C. couple escaped from waist-deep water and mud in their home after it was hit by a dramatic slide called a “debris flood”  in the middle of the night.

It happened early Saturday morning in their home of 37 years, near the Willox Creek, on a rural road near McBride, more than 200 kilometres east of Prince George.

At about 1:30 a.m., Garry and Mabel Moore were startled awake by a noise that sounded like a freight train barrelling through the house.

Then a debris flood smashed through the bedroom wall.

“It took literally 35 seconds to have our house full of mud and dirt and gravel and rock,” said Garry, 70.

As the debris reached their knees, Garry grabbed a floating log to break the kitchen window — a new window he said was difficult to break.

“You do what you have to do when the flood’s chasing you,” he said.

Mabel climbed up on the kitchen table to climb through the window.

“The table was bobbing in the water when I stood on it,” she said.

The couple managed to squeeze out through the small window, bringing with them their granddaughter’s small dog, Bean, a shih tzu-bichon frise that was staying with them.

Once they’d escaped the house, they still had to cross a long stretch of mud and slide down a steep embankment  to rescue their 81-year-old neighbour.

“I just thought, ‘Please Lord, don’t let another slide come down until we can get where we’ll be safe,'” said Mabel.

A helicopter later rescued the Moores and Bean and flew them to an ambulance just past the slide.

Garry needed surgery for a deep cut he got on his arm while escaping out the window. Mabel broke a toe and is covered in bruises.

“You had logs floating around [in the house] banging in to your legs and your back and [you’re] tripping and stumbling,” she said.

‘You do what you have to do’

Their house is now completely surrounded by mud and debris.

“It looks like a roof sitting on top of a mud pile,” said Garry, who has only seen photos of the damage. No one is allowed in the area.

The couple says they have lost everything — including Mabel’s new false teeth — in the house they raised their family in.

“Absolutely everything,” said Mabel. “We have nothing.”

But they are grateful for the support of family, and from the McBride community, where they are staying with family for the time being.

Most of all, the Moores are amazed and grateful they managed to escape.

“I always didn’t think I was very tough, but I’m beginning to think I must be tough,” said Mabel, who recently completed treatment for ovarian cancer. “We’re together, and we’re still here, so that’s the main thing.”

The Moores’ house and several homes nearby are under an evacuation order.

In addition, about 30 people were told Saturday to shelter in place. The debris flood blocked their only access road as it swept past the Moores’ home.

But that wasn’t the end of things for nearby residents. A second debris flood that day brought down 25,000 cubic metres of debris, according to emergency officials.

The provincial Ministry of Transportation and Infrastructure is monitoring the slide area from the air to determine its stability and says more debris events are probable.

Listen to the full interview with the Moores by clicking the play button below.

At about 1:30 a.m., Garry and Mabel Moore were startled awake by a noise that sounded ‘like a freight train’ barrelling through their house. Then a debris flow smashed through the bedroom wall, flooding their home near McBride with mud, rocks, water and logs. They share their story with Carolina de Ryk. 11:05
Share
Facebook
Twitter
WhatsApp
Pinterest
Linkedin
ReddIt
Email
Print
Tumblr
Telegram
Mix
VK
Digg
LINE
Viber
Naver
Previous articleThere’s a new comet in the sky: Here’s how you can see it
Next articleFormer WE Charity employee says staff tried to silence her by rewriting anti-racism speech