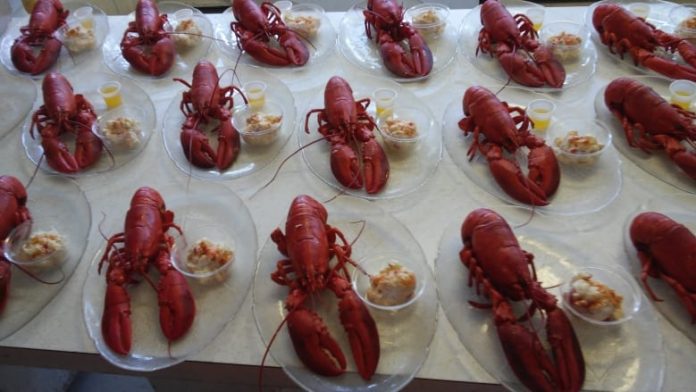 For many, summer in the Maritimes would not be complete without fresh lobster.

But locals and tourists alike should expect to shell out more for the crustaceans as prices reach historic highs.

When the pandemic hit, export and restaurant industry demand plummeted. The shore price of lobster — the amount fishers get at the wharf from buyers — sunk as low as $4 dollars a pound.

“There was an initial glut of lobsters on the market at the start of the lockdown but then it spun back the other way,” says Colin Sproul, president of the Bay of Fundy Inshore Fishermen’s Association.

Sales of live and processed lobster rebounded following the first wave of COVID-19.

Prices started to go up with demand and have continued climbing since.

Canadian lobster exports reached a staggering $3.26 billion last year, beating the previous record of $2.59 billion, set in 2019, by more than 25 per cent.

With many consumers saving money during the pandemic and limited travel or restaurant dining, the crustacean long considered a luxury item for special occasions became a top seller in the U.S.

“Americans bought lobster during the pandemic like they never did before and that drove up demand and price,” says Geoff Irvine, executive director of the Lobster Council of Canada.

While processed lobster — meat and tails — was in high demand in the U.S., sales of live lobster increased in Asia.

“There is unlimited demand in Asia for Canadian lobster,” Sproul says. “It’s a top quality product and we have a good trade relationship.”

“The highest wharf price that I’ve ever heard of for lobster in my life was a few weeks ago at $19.50 a pound,” Sproul says.

Prices have since dropped to around $14.50 this week and could ease further during the spring lobster fishery.

The opening of several lobster fishing areas across Atlantic Canada in the coming weeks is expected to boost supply.

Thousands of extra fishing boats will hit the water setting traps. Also, landings — the catch or total weight of lobsters trapped and sold — increase in warmer spring weather as well.

The added supply should rein in prices, Lamont says.

“We’re playing with fire when we pay prices that cannot be passed on to the market,” he says of the record lobster prices.

If prices climb again to $20 a pound and stay there, some restaurants and grocery stores may stop selling the crustaceans altogether, Lamont says.

“We have visitors come to Nova Scotia from all over the world to experience our seafood but at the current prices it’s really not accessible,” he says. “We could start to see lobster taken off menus.”

Still, he admits it can be pricier for locals to pick up a boiled lobster at Sobeys for supper.

“It is challenging for people in Atlantic Canada if they want to buy lobster because we’re exporting so much at high prices,” Irvine says. “It may be tough for local people here to be able to afford it … but our goal is to maximize the economic value.”

But Lamont says shore prices that approach $20 a pound are unsustainable.

“We have this concept of the poor fisherman from 50 years ago but fishermen today are earning incomes that are extraordinary,” he says.

But the reality is fishers are also facing crushingly high inflation — on top of hefty debt many take on to join the lucrative industry, experts say.

Mounting fuel and labour costs, big loans on boats, licences and other equipment and ongoing maintenance all eat into high shore prices, they say.

“For a lobster boat that holds about 10,000 litres of fuel, you’re looking at a fill up as high as $18,000,” Sproul says. “Wages are also high because it’s a very demanding job and there’s a component of danger.”

High operating costs are in addition to the upfront cost of joining the fishery, which can hit as much as $5 million once a licence, boat and lobster traps are tallied, he says.

Meanwhile, the cost of bait used in lobster traps is expected to increase after Fisheries and Oceans Canada announced the closure of the Atlantic mackerel and commercial bait fisheries on the East Coast, citing concerns that dwindling stocks have entered a “critical zone.”

“The biggest source of bait has just been eliminated from the industry,” Sproul says. “We’ll have to import bait and it will cost us more.”

Higher bait cost is just one of several factors that could affect prices, Irvine says.

Inflation, uncertainty with spiking COVID-19 cases and the potential impact of the Russian invasion of Ukraine on shipping and demand could all influence lobster prices, he says.

“The big question on everyone’s mind is what’s going to happen when all the seasons open up here in the next month. We expect the market to stay good but there’s a lot of variables.”