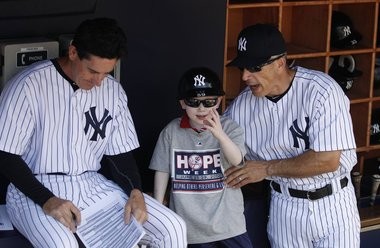 The A’s are embarking on a seven game road trip that will be the team’s toughest test of the first two months of the season. The last two road trips the A’s took didn’t go so well, the team only securing three victories in fifteen total games, and those road trips were primarily against division rivals who haven’t exactly been lighting this season on fire (Astros notwithstanding). The A’s are a mere 6-15 on the road, still the worst in the American League, and those struggles are the difference between the A’s being in second place in the division and fourth, where they are now.

The Astros are winning two out of every three games and have the best record in all of baseball, but the team also has mostly beaten up on a very disappointing AL West. Texas and Anaheim have both fallen back to Earth after their individual surges and are back at a .500 record and marred in losing streaks, and Seattle’s offense-first roster isn’t producing enough offense for the team to stay afloat. The A’s are just two games out of second place in the division, which, along with a dollar, can buy a candy bar. But while second place would be ultimately meaningless, it could serve as a moral victory on the season if this roster can hang around in the top half of the AL West when just about every sports news outlet had Oakland (perhaps rightfully) pegged for last.

But there is also the strong chance that the A’s fall further out of it over the next week, because over the next seven games they will be taking on two favorites to reach the World Series- the Yankees and the Indians.

The storied Yankees franchise has hit a road bump the last few seasons, winning more often than losing but expensive and aging and worsening veterans and underachieving prospects prevented the Yankees from being a feared opponent and it’s been a long time since the Yankees have been thought of as serious World Series contenders. Attendance, while still strong, has been waning as the franchise hasn’t played up to the lofty expectations it has year in and year out. However, this year has witnessed the resurgence of the team’s veterans, as though they all simultaneously aged in reverse over the offseason, and the rookies they’ve entrusted have loudly burst onto the MLB scene with authority, and suddenly the team no longer looks tired and underpowered.

Everyone is talking about Aaron Judge, and with good reason. The behemoth of a rookie has been on fire since earning the starting job in right field out of spring training for New York, effortlessly blasting monster home runs already fifteen times on this young season. Judge is playing so well, in fact, that the Yankees have installed a special section in right field called the “Judge’s Chambers” to honor him and make him the face of the youth movement in New York after just two months of play. It is clear that the Yankees believe strongly in Judge, and more than likely he will wind up in pinstripes for a long, long time.

Michael Pineda, this year, has done his part to make the Pineda for Jesus Montero trade less sad on both sides, as he is finally the anchor to the starting rotation the Yankees hoped he’d be. In 53 innings pitched he’s gotten over sixty strike outs, and has a WHIP of 1.04.

On the other hand, expected ace of the staff Masahiro Tanaka has been getting knocked around of late. His normally deceptive offerings are not fooling any hitters, and too many breaking pitches have been left floating up in the zone, and in his last two starts he has given up fourteen runs and seven home runs.

All games are on NBCSCA. Saturday’s game will also be on MLBNetwork for all out of market folks.

The Yankees have been (just about) as good playing at home as the A’s have been bad on the road, with a 15-7 record in front of their home fans, so these next few games are going to be a tough test for Oakland. The A’s best chance to take at least one game of the series looks to be on Friday night against Tanaka, as the homer-happy offense will get to play in a homer-happy stadium against a pitcher who is currently very homer-happy himself.

For the Saturday and Sunday morning games, the A’s are going to have to keep hitting regardless of who takes the hill for the Yankees. Sean Manaea has struggled much more on the road than at home all season and Triggs, due to being a reliever his entire career before midway last year, will soon start to have innings limit and fatigue issues, as he is just a couple of starts short of reaching his career high in innings pitched. And even if the A’s are able to jump on a starter for some early runs, or run up a starter’s pitch count, things don’t get easier when the ball gets turned over to the Yankees bullpen. Despite missing Aroldis Chapman to injury, the Yankees bullpen is one of the strongest in the game and has dependably held onto the leads that it has been given. These games will be won or lost in the early innings.

It is Judgement Week for the A’s. Facing some of their stiffest competition while on the road, the A’s have to prove that the team won’t just roll over and die outside of Oakland. If the A’s can stay competitive and return to Oakland next week with three or more wins under their belt, it could be a sign for some greener days ahead.