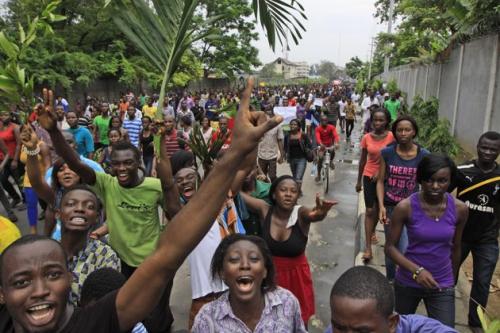 The National Association of Nigerian Students (NANS) Abia State Chapter on Monday marched through the streets of Umuahia protesting against the ongoing Academic Staff Union of Universities (ASUU) nationwide strike.

The protesters, who carried placards with different inscriptions, appealed to the Federal Government to negotiate with the striking teachers in order to urgently end the action.

Some of the placards read: “Government don’t commercialise education”, “Save education, save the future”, “Seven per cent budgetary allocation is a misplaced priority,” among others.

The NANS Representative in the South East Zone, Cokey Nwachukwu, said that the students were tired of idling away at home and were anxious to return to school.
“Some of us are supposed to be doing four or five-year courses but as it is now, the years are likely to be extended because of the strike.
“Most of us that are supposed to be mobilised for the National Youth Service Corps are now sitting at home.

“Very soon, they will tell us they are going for general elections and will alter our academic calendar,” he said.
The students also urged the Federal Government to urgently address the security challenges in the country, especially in the North-East.