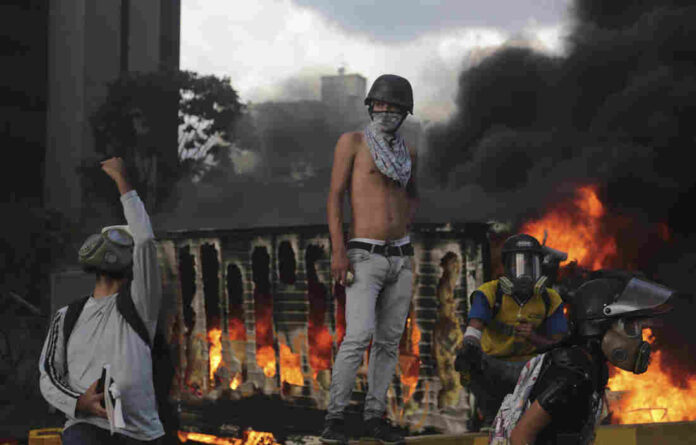 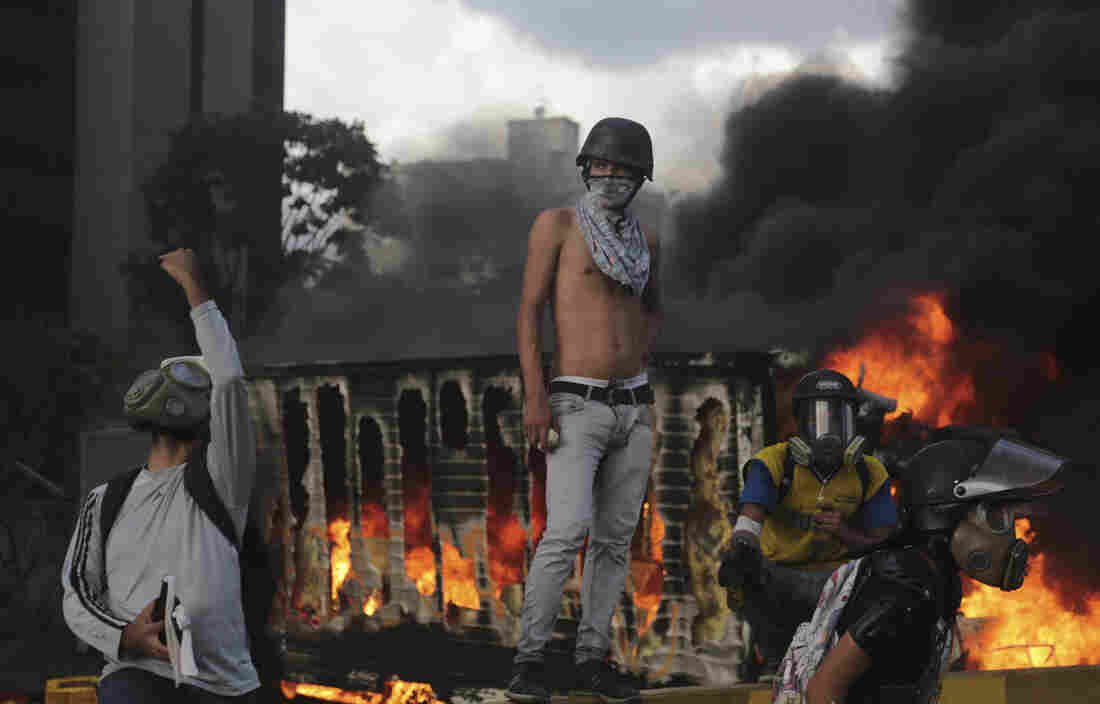 A truck burns behind a man perched near a traffic barrier in Caracas, Venezuela, on Saturday. In more than 60 days of unrest, at least 60 people have died in violence related to protests against President Nicolas Maduro. Fernando Llano/AP hide caption

A truck burns behind a man perched near a traffic barrier in Caracas, Venezuela, on Saturday. In more than 60 days of unrest, at least 60 people have died in violence related to protests against President Nicolas Maduro.

It’s been more than 60 days since Venezuela’s Supreme Court moved to dissolve the country’s National Assembly. The move intended to eliminate a thorn in the side of embattled President Nicolas Maduro was reversed after three days — but its political fallout has now barreled into its third month roiling city streets across the country.

In that time, the list of protesters’ demands — from the resumption of local elections to an end to the nationwide food shortage, to even the ouster of Maduro himself — has grown. And the death toll has mounted.

As The Associated Press reports, at least 60 people have died in clashes between demonstrators and security forces, and at least 1,000 protesters have been jailed. 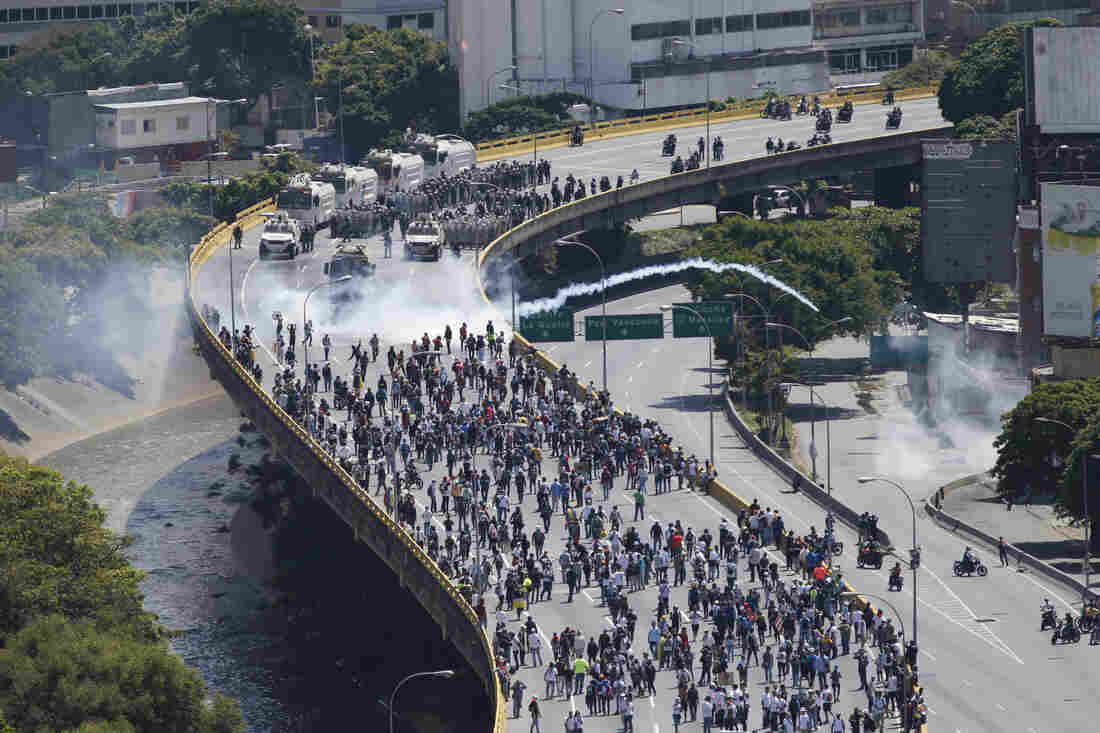 Protesters march toward the federal ombudsman’s office Monday in Caracas, protesting what they believe to be a lack of action against Maduro. Their path, however, is blocked by the armored vehicles and officers of the security forces. Ariana Cubillos/AP hide caption

More than 250 people were injured in Monday’s protests alone, according to the BBC.

Lately, the opposition’s ire has affixed to a new target, one outside Venezuela’s borders: Goldman Sachs.

Last week, the Manhattan-based investment bank bought bonds from Petróleos de Venezuela, or PDVSA, the state-run oil and natural gas company. According to multiple media outlets, the deal included $2.8 billion in bonds — a purchase that, despite the reportedly steep discount the company offered, is a much-needed boon to an oil-rich government reeling partly from anemic oil prices worldwide.

In a statement, Goldman confirmed the purchase, without mentioning how much it paid. The bank said it did not buy the bonds directly from the Venezuelan government.

“We recognize that the situation is complex and evolving and that Venezuela is in crisis,” the bank said in a statement quoted by Reuters. “We agree that life there has to get better, and we made the investment in part because we believe it will.” 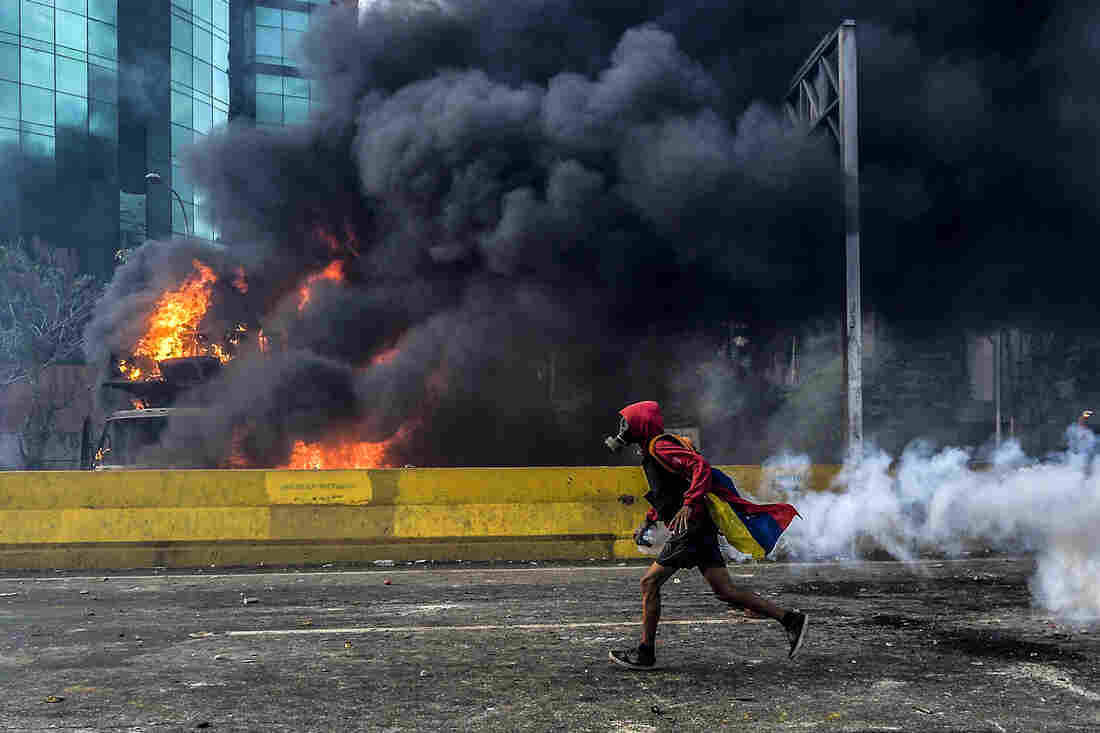 An anti-government protester runs past a burning truck blocking the Francisco Fajardo highway in Caracas during a demonstration on Saturday. Luis Robayo/AFP/Getty Images hide caption

An anti-government protester runs past a burning truck blocking the Francisco Fajardo highway in Caracas during a demonstration on Saturday.

Julio Borges, leader of the opposition-heavy National Assembly, did not accept this explanation.

“Given the unconstitutional nature of Nicolas Maduro’s administration, its unwillingness to hold democratic elections and its systematic violation of human rights, I am dismayed that Goldman Sachs decided to enter this transaction with the Maduro regime,” Borges wrote in a letter earlier this week.

“It is apparent Goldman Sachs decided to make a quick buck off the suffering of the Venezuelan people,” he added.

Borges also promised “to recommend to any future democratic government of Venezuela not to recognize or pay on these bonds,” which he says were bought at a 69 percent discount.

On Tuesday, Reuters reports, the National Assembly voted to request that the U.S. investigate the deal, and protesters gathered outside Goldman’s headquarters in New York City.

(Left) A member of the Venezuelan National Guard fires his weapon in Caracas, as protesters there block a major thoroughfare on Monday. (Right) A tear runs down the cheek of a woman marching in protest of a decade-old decision not to renew the broadcast license for Radio Caracas Television. Juan Barreto/AFP/Getty Images; Fernando Llano/AP hide caption

Meanwhile, in Venezuela’s city streets, violence between riot police and protesters has shown no sign of relenting.

Another opposition leader, Henrique Capriles, alleged that he and his entourage were “ambushed” and beaten by the Venezuelan National Guard at a protest in the capital, Caracas.

A visibly bruised Capriles detailed the incident at a news conference Monday, according to the BBC:

” ‘I was practically choking [from the tear gas] … when a National Guard team ambushed us,’ he said, showing photos of the injuries some of his supporters had suffered.

” ‘They took all of their gas masks and their helmets,’ Mr Capriles said.

” ‘I asked them ‘what is wrong with you?’ and their answer was to hit me with a helmet in the face.’ “ 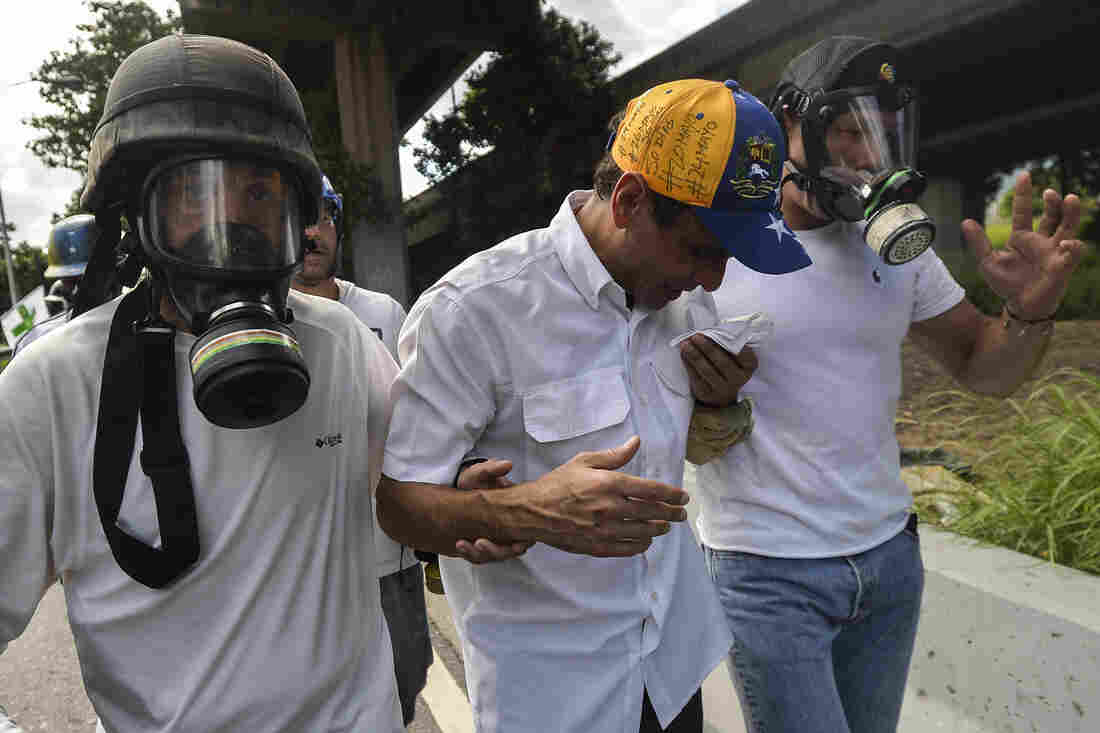 Opposition leader Henrique Capriles (center) is assisted after being hit with what he said was tear gas during a protest in Caracas on Monday. Capriles also alleges he and his supporters were beaten by members of the National Guard during that demonstration. Luis Robayo/AFP/Getty Images hide caption

Maduro continues to maintain that the protests are driven by coup-minded opposition leaders and outside powers — foremost the U.S. — seeking to undermine his government.

Many of those foreign leaders, for their part, plan to meet Wednesday to discuss a possible way forward in negotiating with Maduro’s government. The Organization of American States is gathering foreign ministers from Western hemisphere countries to “establish a mandate for new diplomatic engagement,” according to a senior U.S. State Department official.