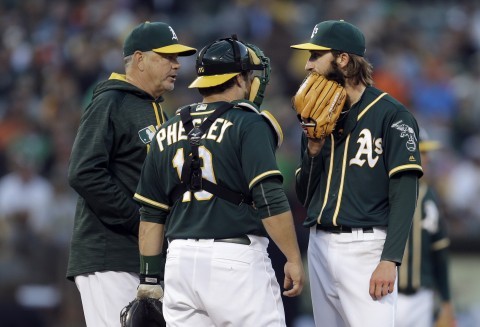 In a surprising move both for timing (mid-season) and “no one really saw it coming,” the A’s have fired — technically “relieved of his duties” — pitching coach Curt Young. As Susan Slusser notes, between his time pitching for the A’s and serving as pitching coach for Oakland, Curt Young was the longest serving in-uniform employee in Oakland A’s history.

Young is replaced, at least for now, by bullpen coach Scott Emerson, with Gil Patterson (the cutter guru) coming in for the weekend to act as bullpen coach. It is not clear why the A’s felt the need to make this move right now, which adds intrigue to the decision to cut ties abruptly with such an organizational fixture.

We will add updates if and then they become available. Until then, get excited about the arrival of Matt Chapman and don’t forget to wish Trevor Plouffe, who is being DFA to make room for Chapman, a happy 31st birthday. When he blows out the candles on his birthday cake, the sound you will hear undoubtedly will be “plouffe”.

Curt Young tells me, “Stuff happens. I felt it coming back. I’m honored to be with a great organization so long.”

Major change, obviously, on A’s coaching staff, and an acknowledgment that things simply haven’t gone according to plan this season.

Curt Young, a member of Oakland’s 1989 World Series winners, was in his second stint as #Athletics pitching coach at the time of his firing