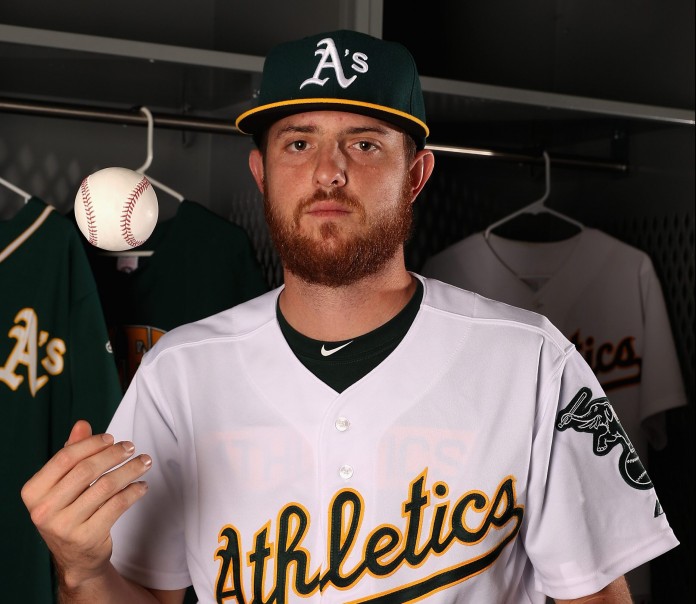 Per the San Francisco Chronicle and confirmed by A’s, Oakland has called up Paul Blackburn from AAA Nashville. The righty will make his Major League debut today against the Atlanta Braves.

Blackburn will take Jharel Cotton’s spot in the rotation. Cotton has been dealing with a lingering blister issue, unable to make his scheduled start. To make room for Blackburn on the 25-man roster, the A’s optioned Josh Smith back to AAA.

The A’s acquired Blackburn last offseason in a trade with the Seattle Mariners, sending Danny Valencia in return. In AAA Nashville this season, Blackburn has pitched 79.2 innings with a 3.05 ERA and 56 strikeouts against 26 walks.

Paul Blackburn does several things well. A 2012 supplemental first-rounder from high school in California, he throws strikes, shows good pitching instincts, and has made progress with both his curveball and change-up. His velocity is erratic, ranging from 86-89 in some games to 92-94 in others. Obviously the higher readings are preferable but he hasn’t maintained them over the course of a season yet. He also made two visits to the disabled list last year and it remains to be seen what kind of workload he’ll manage at higher levels. I have been optimistic about his chances, thinking that his velocity could pick up, but right now he looks more like fifth starter material or possibly a bullpen arm. Grade C.

… and Sickels again, in his July update:

2016 has been a very good season for him … He’s held his fastball velocity more readily this year in the low-90s while making further progress with a tighter curveball. Best of all he’s been healthy. The 6-1, 195 pound right-hander is 22 years old and I’d move his grade up to a C+ based on current information.

From Eric Longenhagen of FanGraphs.

Mostly 88-92 mph, though he’s touched higher in the past. It’s a little bit straight, but he fills the strike zone with it and locates well to his arm side. Mid-70s curveball is the best secondary, 11-5 movement with solid depth, a fringe pitch now that projects to average. The arm action allows for some changeup projection but it’s unlikely to miss bats. He projects as an up and down spot starter.

The Cubs took Blackburn with the 56th overall pick of the 2012 draft out of Heritage High School in California, and the belief was that he was an advanced pitching prospect that also had some projection. While he’s shown the ability to throw strikes with all three pitches, the projection hasn’t–and probably will not–come, and he’s actually lost a tick or two off his fastball, sitting 88-90 mph most games. His best pitch is his changeup; he uses the same arm speed on it, and there’s enough fade here to call it a solid-average offering. The curveball is also an average pitch; a pitch that is light on velocity but has enough break and depth to give it a 50 grade. He repeats his delivery well, and he should throw enough strikes to start. You’re looking at no more than a fifth starter in all likelihood, but that might be the floor, too.

Blackburn can throw 90-94 mph sinkers with downhill plane to both sides of the plate and back them up with a sharp curveball. But there were several starts last year when he had an 88-91 mph fastball and a vanilla curve. He still needs to add strength so he can maintain quality stuff deeper into games and longer over the course of the season.

Blackburn has good feel for his changeup and pitching in general. He has the athleticism to repeat his delivery and throw strikes, and he continues to pound the zone even when his pitches aren’t at their best.

When your team is bad, rookies can help offset the doldrums of a long season. Paul Blackburn isn’t going to be an ace, but he could be a nice backend starter and he’s certainly a piece to watch. Local products are always more fun, and hopefully his family is able to make short trek to watch his debut. All he has to do to make his time in the green and gold worthwhile is not punch the DH.