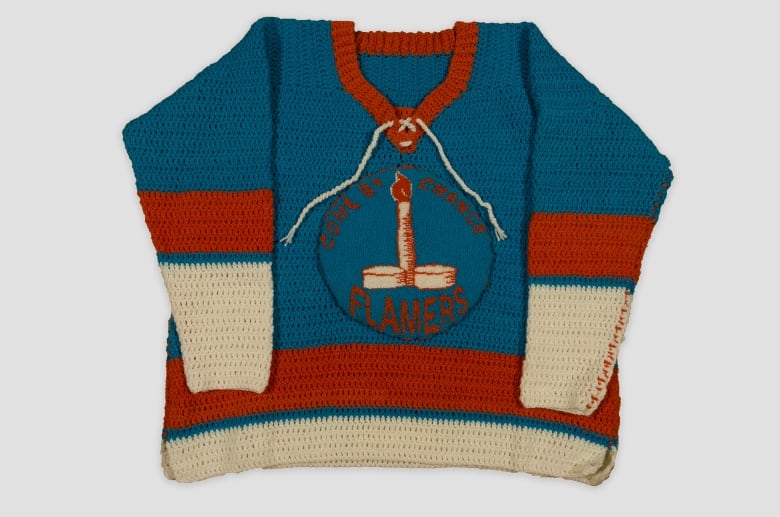 Ever heard of the St. John’s Sissies? The Corner Brook Queens? The Come By Chance Flamers?

If you’re strictly a sports fan, probably not. But these fictional teams and their creator skewer traditional hockey tropes and offer up a campy alternative world known as the Queer Newfoundland Hockey League.

The league is the brainchild of artist Lucas Morneau, who has created 14 teams in total, each with a jersey crocheted and rug hooked in retro colours and detailed logos from across Newfoundland and Labrador — from the Nain Nancys to the Ferryland Fairies — along with hockey “cards” of players and textile goalie masks.

Growing up in Corner Brook, hockey was always on TV in Morneau’s home. He recalled happily watching broadcasts as a kid, particularly the Coach’s Corner commentary and its opinionated host, Don Cherry, but his enthusiasm faded as he got older.

“When I grew up, more and more, I became more aware of the sort of language that was being used by Don that sort of belittled or demasculinated a lot of players — calling players who refused to fight, like, ‘sissies’ and ‘pansies,'” said Morneau, who now lives in Sackville, N.B.

“And that really got to bother me as I grew up and sort of came to realize I was queer myself.”

When Cherry was fired from Coach’s Corner in 2019 for anti-immigrant comments, Morneau found inspiration.

“I wanted to essentially find a way that I could talk about these issues with homophobia within sports — and especially as well with a hegemonic masculinity — and how that affects the mental health of players as well as fans,” he told CBC Radio’s Weekend AM.

Morneau began crocheting the jerseys in the winter of 2020, and his work has now been recognized by The Rooms, Newfoundland and Labrador’s largest public cultural space. It acquired his St. John’s Sissies jersey, created with wool and pantyhose from drag queens, for its collection.

“It was a tough choice,” said Mireille Eagan, The Rooms’ curator of contemporary art, about which team to take. The selection committee ultimately landed on the Sissies jersey for its connection to Cherry’s language.

“Lucas Morneau is adopting that term, and he’s embracing that term and he’s making that a powerful term,” she said.

“So that’s why this work matters. It’s a shift, it’s a slight shift and a fundamental shift in perspectives around the sport of hockey and around ideas of masculinity and culture in general.”

Already well versed in crocheting before tackling the QNHL— Morneau has crocheted drag queen-mummer costumes, among other previous works — he added in rug-hooking skills for his textile take on team sports. Halfway through the project, it was so consuming that he hired an assistant, Libbie Farrell, to collaborate and finish the work.

His QNHL often uses humour to make a point. His logo for the François Fruits, for example, features a goofy pineapple reminiscent of the talking version from the Téléfrançais! kids TV show of the 1980s, alongside a word often used as a homophobic slur.

“It kind of softens the blow of serious social discussion and serious social critique, through humour, and so it makes it an easier pill to swallow,” she said.

Morneau said his family in Corner Brook have been supportive throughout his project. “They love it,” he said.

His father sometimes helped him pick out potential team names, he said, while his grandfather — in his 90s — would often laugh at the results.

“It was something that brought my family together, even though it was quite a tough subject,” Morneau said.

The QNHL also caused a bit of reckoning within Morneau’s family, he said, as relatives realized some of the words they used in another era’s casual conversation “are actually pejoratives that are rooted in homophobia, that they use themselves not knowing the history of those words,” he said.

Morneau pointed to the Bonavista Buggers jersey as an example, with that term sometimes used to refer to someone pestering someone else, “but really, it’s a homophobic attack,” he said.

“And I think making people aware of certain terms and their history is an important part of this project as well.”

The changing world of pro sports

Morneau’s crocheting critique extends to ideas about what professional athletes can and can’t say.

“Players aren’t really allowed to talk about their mental health issues, about their personal struggles — whether it be their sexuality, family issues, etc.,” he said.

“And I think it’s important to build up the the environment around the players to ensure that they feel comfortable being themselves. Because if [you’re] not comfortable being yourself and you feel like you have to hide everything, you just internalize stuff. And that just makes everything worse.”

In June, Nashville Predators draft pick Luke Prokop became the first NHL player under contract to come out as gay. That, alongside other efforts within professional sports — such as the You Can Play organization that promotes LGBTQ athletes and allyship — show some bright spots and progress, Morneau said.

“I think there’s a bigger conversation that’s happening with sports culture. And for it to succeed in the future, it needs to become more inclusive,” he said. “Because otherwise, it’s really going to shut itself off to a very small group of people.”