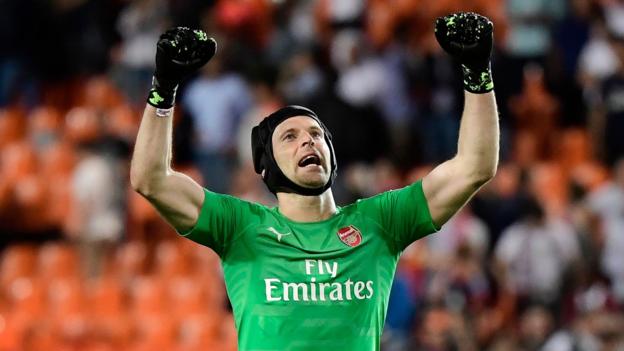 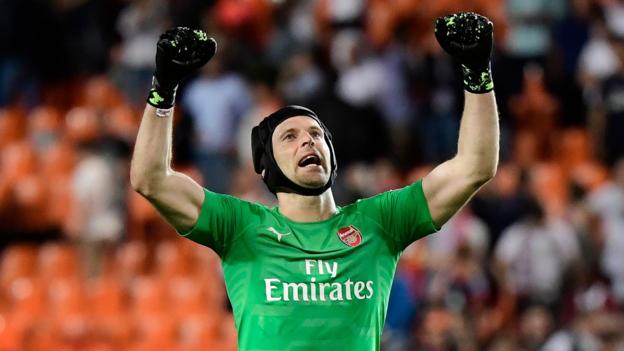 Arsenal goalkeeper Petr Cech says it will be a “dream” to face former club Chelsea in the Europa League final in the last game of his career.

The Gunners booked their place in Baku after beating Valencia 7-3 on aggregate in the semi-final, and Cech, 36, is set to retire after the final.

Cech has consistently played in Europe this term, despite dropping behind Bernd Leno in the Premier League.

“It will be remarkable to end my career against Chelsea,” he told BT Sport.

“The last dream was to play this European final and it has come true. Now the dream is to win the trophy.”

The former Czech Republic international believes he could continue playing, but “wanted to retire on my terms”.

Cech added: “You have days when you play well and you think you could continue, but I think I have made the decision with a lot of thought.

“I could possibly go another two years but I would rather retire early than too late.”

Arsenal will play London rivals Chelsea in Baku, Azerbaijan on Wednesday, 29 May and manager Unai Emery said he is “proud of the whole club” after their impressive victory at Valencia.

Leading 3-1 from the first leg, Arsenal fell behind to Kevin Gameiro’s opener before Pierre-Emerick Aubemeyang struck an impressive hat-trick and Alexandre Lacazette scored another as Arsenal progressed to their first European final since 2006.

Emery believes his side take “confidence from their strikers taking chances”.

The Gunners boss told BT Sport: “We knew we had to be calm after they scored and we needed to control our emotions. It is very difficult to score four goals against this team because they are very organised.

“It is very difficult to play in finals and we took our opportunity today which we are happy about.”

Aubemeyang and Lacazette have been pivotal in Arsenal’s route to the final, having scored 13 competition goals between them, and the former says the club have “learned from last season” when they were knocked out by Atletico Madrid in the semi-final.

“This year we didn’t make the same mistakes,” the Gabon striker told BT. “Now we are through to the final.

“We have talked a lot about our relationship [with Lacazette] and it is a pleasure to play with him, above all, when you win games like this.”