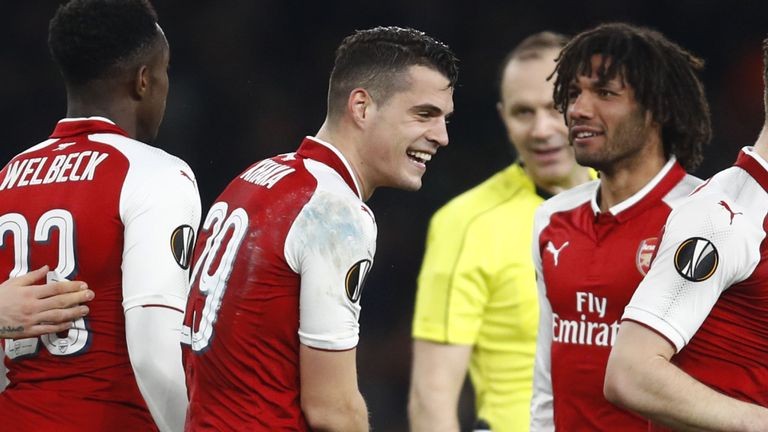 Hakan Calhanoglu’s first-half strike gave the Gunners a brief scare, but Danny Welbeck’s controversial penalty just before the break restored the advantage and when Gianluigi Donnarumma failed to deal with Granit Xhaka’s long-range shot it was over as a contest

Welbeck’s late header added further gloss to the scoreline and sealed Arsenal’s place in the last eight, but how far can Arsene Wenger’s team go in the competition? Will they save their season? And have they hit upon the right personnel to help achieve that goal?

The night did not start particularly well for Arsenal with captain Laurent Koscielny picking up an early back injury that forced him off the field. Fortunately, it seems that the problem is unlikely to be a long-term one for the 32-year-old Frenchman. “He got a kick on his back,” said Wenger in the press conference afterwards. “We don’t think it’s bad.”

Koscielny has not enjoyed the best of seasons but he remains a key figure at the club so it was a positive that the Gunners were able to get the job done without him. Calum Chambers did well to adjust in his role as the replacement and Shkodran Mustafi was much improved alongside him. It still feels a fragile area for Arsenal in more ways than one.

Welbeck is under the spotlight

At the other end of the pitch, Welbeck marked his England call-up by scoring his first goals since the first week of 2018. But it would be stretching the truth to suggest that the forward enhanced his reputation given that the first of his goals came from a penalty kick awarded when he went down in the box following minimal contact with Ricardo Rodriguez.

Where Welbeck did impress was in getting to his feet to send Donnarumma the wrong way from the spot and his subsequent performance will have encouraged Wenger that Pierre-Emerick Aubameyang’s ineligibility coupled with Alexandre Lacazette’s injury need not be the crippling blow to their Europa League hopes that it might have seemed.

Perhaps even more significant was the partnership between Jack Wilshere and Aaron Ramsey who combined well to set up Welbeck for his second goal. Wenger has been reluctant to pair the duo together in his midfield this season. Indeed, they have found themselves in the same Premier League starting line-up only once since 2014.

However, with Xhaka behind them, each produced promising performances. The long-term future of both men at Arsenal is in doubt – “we have made a proposal to him and I want him to stay,” was Wenger’s assessment of Wilshere’s future this week – but the priority right now is finding the right blend in midfield for the rest of this season. There are signs that they are it.

Could Arsenal save their season?

Indeed, in a season that has seen the now familiar debate about where Arsenal go next, this Europa League campaign provides much-needed focus. Ramsey has described the competition as a “massive opportunity” for the club and it is hard to disagree – it is the chance to secure Champions League football and end a 24-year wait for a European trophy.

Wenger has been reluctant to overtly make it clear that the Europa League is his priority but the team selection on Thursday told the tale. Not only is this the chance for him to win his first European silverware, having lost his first final with Monaco back in 1992 and two since with Arsenal, but it also offers the opportunity to save the season in style.

Are they good enough to do it?

Whether they are playing with the requisite quality and confidence to pull the feat off remains in question. Milan certainly had their moments. Suso shot wide when well placed, Patrick Cutrone had a good volleyed chance and Nikola Kalinic should have done better with an unmarked header – all while the game was still in the balance.

Better teams could yet punish the Gunners and while supporters will be grateful to have seen Napoli and Borussia Dortmund exit the competition of late, Atletico Madrid remain the favourites for the trophy. Of course, so were Chelsea in last season’s FA Cup final. Arsenal have proved people wrong before. Could they do it yet again to finish the season on a high?