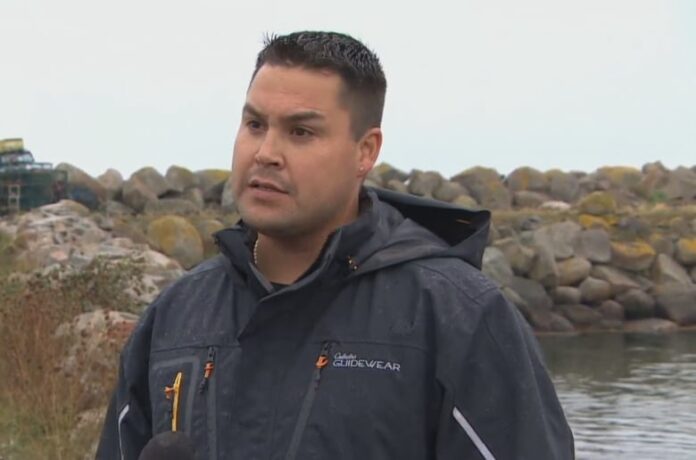 Two people have been arrested and tensions continued to run high in Nova Scotia on Friday as many gathered to support, and oppose, a First Nation’s new moderate livelihood fishery outside the regular lobster season.

In Lower Saulnierville, N.S., Friday morning, a group of boats belonging to non-Indigenous fishers could be seen circling the mouth of the harbour in front of the docked Mi’kmaw vessels.

The Sipekne’katik First Nation held a ceremony Thursday in Lower Saulnierville to bless the fleet and distribute licences and tags.

Five licences were issued, each allowing the setting of 50 traps.

In total there are 979 inshore lobster licences in this fishing area, known as LFA 34 and one of the most lucrative in Canada.

Brandon Maloney, director of fisheries for Sipekne’katik, said the move was “another intimidation tactic” from non-Indigenous fishermen, which he said they’ve been dealing with over the past two days.

A video posted to social media from a Mi’kmaw boat late Thursday night shows flares being shot in their direction from non-Indigenous fishers.

Maloney said the lines to their first livelihood traps were cut right away, and when some Mi’kmaw fishermen went back out to recover some of their gear, the flares came out.

The First Nation fishermen decided it would be best to stay on land and around the wharf Friday to keep an eye on their boats, Maloney said. But he said they would be heading out on the water as soon as it was safe to do so.

The Assembly of Nova Scotia Mi’kmaw Chiefs declared a state of emergency on Friday in response to “violence occurring over Mi’kmaq fisheries across the province.”

The state of emergency applies to mainland Nova Scotia, but in a press release the assembly said it may extend it to Cape Breton as well. It will go on until at least Tuesday, Sept. 22, at 5 p.m., with a possibility of an extension.

“We are further calling on the Canadian Department of Fisheries and Oceans, RCMP, and the Government of Nova Scotia to assist in the protection of Mi’kmaw fishers, families, and supporters,” the assembly said.

The Assembly of First Nations called on Prime Minister Justin Trudeau to intervene in support of Mi’kmaq fishers.

In a press release on Friday, the assembly said the Mi’kmaq fishers are “facing increased aggression, threats and danger.”

The assembly said the escalation is a result of “direct inaction by Minister Bernadette Jordan and the Department of Fisheries and Oceans.”

In one Facebook livestream Friday afternoon, roughly 200 people could be seen on the wharf shouting, arguing and standing with arms folded as RCMP officers walked through the crowd.

Although Department of Fisheries and Oceans members have been in the area, they have taken no direct action yet regarding to the fishery.

RCMP spokesperson Cpl. Jennifer Clarke said Friday the Mounties have been “present and engaged” with all those in the area including DFO, the community and the Sipekne’katik First Nation.

She said the RCMP are on land, they have a boat in the water, and members are in the air.

“We arrested two individuals at the wharf in Weymouth this morning. Both were arrested for assault and were escorted away from the scene and have since been released, pending court,” she said.

In the last 24 hours, Meteghan RCMP has responded to several calls, including accusations of uttering threats, mischief, and related complaints. Each of these is being investigated and Clarke said the RCMP will take action if criminal activity has taken place.

Shouting could also be heard within a large crowd gathered at the wharf in nearby Weymouth, N.S., about 25 kilometres north of Lower Saulnierville. One man in a black hoodie could be seen being led away by police.

Police will be keeping a presence in the area over the weekend until tensions ease, she said.

Members of First Nations across Nova Scotia have come in person to support Sipekne’katik’s fishery.

In LFAs 33 and 34, which run from Halifax to Digby and would include Sipekne’katik’s fishery, the most recent combined annual landings in 2018/19 were 27,000 tonnes worth an estimated $490 million.

As of now, it has a “relatively high resource abundance” generating the highest overall lobster landings in the region according to DFO.

That decision recognized a First Nations’ right to earn a moderate living from fishing, but the federal government retains the authority to regulate that fishery in the public interest and for conservation.

Exactly what that “moderate living” fishery means has yet to be defined, even after more than 20 years.

That is why Maloney said it was time for the First Nation to create their own regulations and move ahead without DFO, who weren’t even “at the table.”

In an interview with CBC Nova Scotia News at 6 on Friday, Fisheries Minister Bernadette Jordan said her top concern is the safety of people on the water and people gathering at the wharves.

Jordan said she wants to meet with commercial fisheries representatives and Indigenous leaders to talk about “the best path forward.”

Jordan said she’s confident both sides will come to the table to have a discussion for the sake of safety.

Fisheries Minister Bernadette Jordan said she wants to have a sit-down meeting with commercial harvester representatives and Indigenous leaders to find the best path forward. 6:39

She said nobody is debating the right of Indigenous communities to fish for a moderate livelihood, but “it has to be within the Canadian framework.”

The impasse at St. Marys Bay needs to end, she said. Jordan said she’s encouraging people who are there now to go home.

In a statement, Colin Sproul of the Bay of Fundy Inshore Fishermen’s Association said the First Nation issuing its own fishing licences is “not based in Canadian law.”

On Tuesday morning, hundreds of non-Indigenous commercial fishermen set up lobster-trap blockades in Saulnierville and later in Weymouth to protest what they said were illegal fisheries in St. Marys Bay.

Up to four other moderate livelihood fisheries are also in the works.

Potlotek First Nation in Cape Breton is aiming for Oct.1, and Millbrook near Truro is also planning one.

Others in the province are developing their own approach through the Assembly of Nova Scotia Mi’kmaw Chiefs.