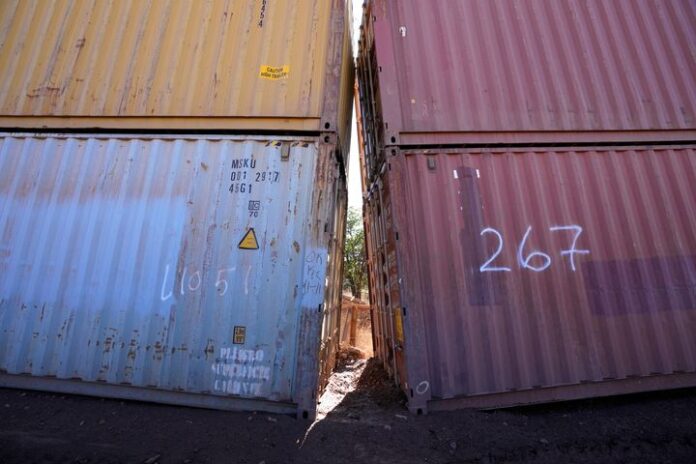 The Associated Press reported Sunday that Ducey, who is set to leave office due to term limits in January, first directed crews to close gaps in former President Donald Trump’s border wall in August. Ducey issued an executive order to begin construction, and the state initially spent $6 million erecting a double-height barrier of containers in Yuma, Arizona, filling in about 3,800 feet of the border.

His office expanded the project in recent months, placing thousands of additional containers that stretch for miles through Coronado National Forest near Tucson. That effort could eventually stretch 10 miles at a cost of $95 million, which has prompted concern from environmentalists, tribal governments and the federal government.

The U.S. Forest Service ordered Arizona to stop building on national forest land, but Ducey sued in October, saying the state has jurisdiction over the land to protect Arizonans.

“Arizona is going to do the job that Joe Biden refuses to do — secure the border in any way we can.” Ducey said of the suit at the time. “We’re not backing down.”

Reporters who have seen the wall say the container barrier is far from perfect. Parts of it are topped with razor wire, with bits of metal placed or welded between gaps. But there are regular gaps where terrain is too steep to place them, and the wall is relatively climbable even though it is 17 feet high.

Work on parts of the container wall has stopped in recent days due to protests and threats from some local law enforcement that anyone placing containers would be arrested for illegal dumping.

Governor-elect Katie Hobbs (D) said she is exploring “all the options” when it comes to the container barrier, including repurposing them to shelter homeless or low-income people.

While she was campaigning, Hobbs said the container strategy was a “political stunt.”

“I am very concerned about the liability to the state of Arizona for those shipping containers that they’re putting on federal land,” she said at the time. “There’s pictures of people climbing on top of them. I think that’s a huge liability and risk.”

Trump’s border wall became a political flashpoint during his tenure and GOP lawmakers have continued to support its construction, lambasting Biden for the ongoing surge of migrants attempting to cross the southern border with Mexico.

There have been a record number of migrants stopped there this year. Border officials said law enforcement stopped people 2.38 million times in the 12-month period ending in September, a figure up 37% from the year before.