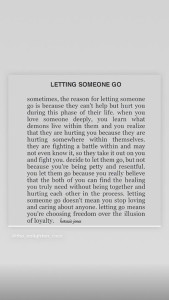 Clearing her mind while she’s on the road? Ariana Grande posted a cryptic message about lost love on social media just four days after she kicked off her Sweetener world tour — and five months since she ended her engagement with ex-fiancé Pete Davidson.

The “Thank U, Next” songstress, 25, took to her Instagram Stories on Thursday, March 21, to share a screenshot of a quote titled, “Letting Someone Go” written by author Horacio Jones.

“Sometimes, the reason for letting someone go is because they can’t help but hurt you during this phase of their life. when you love someone deeply, you learn what demons live within them and you realize they are hurting you because they are hurting somewhere within themselves,” the heartbreaking post read. “They are fighting a battle within and may not even know it, so they take it out on you and fight you.” 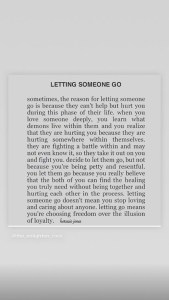 The quote continued: “Decide to let them go, but not because you’re being petty and resentful. you let them go because you really believe that the both of you can find the healing you truly need without being together and hurting each other in the process. letting someone go doesn’t mean you stop loving and caring about anyone. letting go means you’re choosing freedom over the illusion of loyalty.”

Two months after Grande and Davidson ended their four month engagement in October 2018, the comedian — who has been open about his mental health struggles in the past — posted an alarming message to Instagram. The pop star attempted to see her ex following the message, but he refused to engage with her as she waited in the lobby of the Saturday Night Live building, a source told Us Weekly at the time.

Since then, Davidson has seemingly moved on from their split, embarking on a whirlwind romance with actress Kate Beckinsale, who he has been spotted out with on multiple PDA-packed outings since they first sparked dating speculation in January.

Grande, for her part, attempted to clear the air with her exes before she embarked on her latest tour, an insider close to the “God Is a Woman” singer explained to Us earlier this week.

“After ‘Thank U, Next’ came out, Ariana was really living her single life and being with her friends, learning about herself,” the source told Us. “But after a couple weeks, she was trying to figure out what went wrong with her past relationships. She didn’t want any bad blood holding her back from the next phase of her life. She has reached out to her exes to have a positive place in her life right now and for peace of mind, so she can focus on herself and this tour, which is the only thing on her mind right now.”

Since releasing the hit breakup anthem in November 2018 — which mentions Davidson, as well as exes Big Sean, Ricky Alvarez and the late Mac Miller — Grande has been spotted with both the “Bounce Back” rapper and Alvarez. (Miller died from mixed drug toxicity in September 2018 at age 26.)