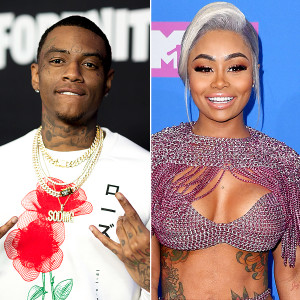 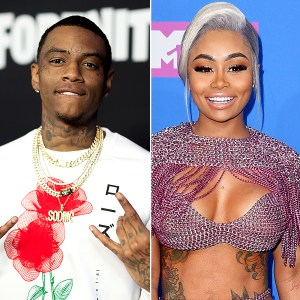 New couple alert? Blac Chyna and Soulja Boy sparked romance speculation on Tuesday, February 12, after the “Crank That” rapper posted a picture of himself and the Lashed owner holding hands — and a bunch more of the two getting cozy. 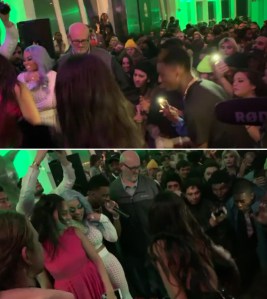 In a second picture posted earlier on Tuesday, Chyna can be seen leaning into the chest of rapper. In the pic, the former reality star sports teal eyeshadow, blue hair and a white shirt. Soulja Boy, for his part, looked casual wearing sunglasses and a dark jacket.

The record producer also took to his Instagram Stories on Monday, February 11, to showcase a series of videos from a club appearance in L.A. the prior night — which also showed him with the former Rob & Chyna star. 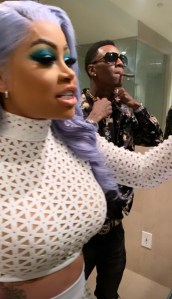 In one of the clips, the Chicago native playfully follows Chyna around as he performs one of his songs. When he catches up to her, the two giggle and flirtatiously dance closely together. In another Story, they can be seen posing for a mirror picture that shows him puffing on a cigar standing next to Chyna, whose midriff is on full display.

Earlier on Monday, Chyna went on a rant regarding her ex-fiancés Rob Kardashian and Tyga in a since-deleted Instagram Live video. (She shares 2-year-old daughter, Dream, with Kardashian, 31, and 6-year-old son, King Cairo, with Tyga, 29.)

“Ya know what’s so wild to me is that I never asked Tyga for child support, Rob for child support or whatever and then we just went to court, or whatnot, and I tried to squash it, which I did,” Chyna said. “But none of that comes out. It’s only negative s–t with Chyna, Angela White.”

In January, police responded to Chyna’s home after they received an anonymous call claiming she was drunk and unable to care for her toddler. An LAPD spokesperson told Us at the time that “no arrests made and no reports taken.”

Kardashian and Chyna have been embroiled in an ongoing child support battle in recent months. The Arthur George sock designer filed to lower his payments to her in November 2018.

Chyna was most recently linked to Kid Buu, while Soulja Boy is currently appearing on Marriage Bootcamp: Hip-Hop Edition with Nia Riley.