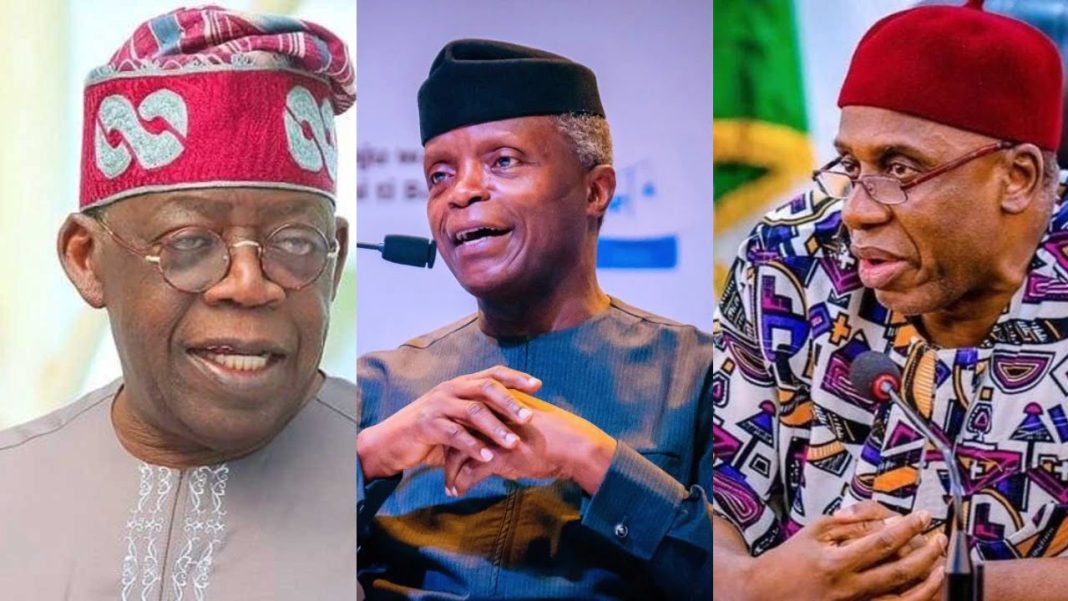 After weeks of intrigues, the ruling party is set to elect its presidential candidate at the Eagle Square.

While 23 aspirants are challenging to be the candidate, the race will probably turn into a three-horse race between former Lagos State Governor, Bola Tinubu, the former Minister of Transportation, Rotimi Amaechi and the Vice President, Yemi Osinbajo.

The decision by some governors from the North to back power shift to the south means the Senate President Ahmad Lawan, Governors Abubakar Badaru and Yahaya Bello may be technically out. Although, the decision of the governors is not binding on the aspirants.

DAILY POST takes a review of the major contenders as they head to the convention.

Although the John Oyegun’s panel that screened the aspirants listed 13 aspirants as top contenders, however, there are only about 5 aspirants with national spread. Namely, Osinbajo, Amaechi, Tinubu, Lawan, Fayemi (who made the list because of his position as Chairman of NGF).

The Vice President has made continuity the central theme of his campaign, however, the political machinery has been limited as Mr Osinbajo has limited experience in elections.

Although he was very instrumental during the 2019 elections with his visits to markets and his appeal to the young persons, delegate election is obviously a different ball game.

Endorsement by the president would have helped, but as of now, that endorsement is yet to come. His inability to get State governors to openly back his aspiration has not done him much good.

In his State, he is contesting with Ibikunle Amosun. Although, the endorsement of his governor, Dapo Abiodun is reassuring. That endorsement appears to have vexed Tinubu, who was clear in reminding Abiodun how he became governor in 2019.

In the Southwest, the Vice President will not be able to clinch a majority of the votes in any of the States. Without the endorsement of Buhari or emerging as the consensus of the South-west, his prospects are very low.

The former Rivers State governor amasses impressive followership in the north. Perhaps his experience as former NGF Chairman and role as campaign DG to Buhari in 2015 and 2019 have helped in the campaign so far.

Amaechi is seen by many within the party as someone who can indeed win at the general election if given the ticket.

Governors Nasir El-rufai, Abubakar Badaru and Simon Lalong have openly endorsed him. In the next few hours, more aspirants are expected to step down; if Amaechi could get one or two endorsements, particularly from aspirants in the South-south; Ben Ayade and Godswill Akpabio, then the race could be his.

His campaign already approached Sani Yerima who could step out of the race in the coming hour.

His deployment of Tukur Buratai as envoy has sent a message to northern elites that security will be a top priority for his administration.

Another positive for him is that his option for vice president is unlimited being that he is a Christian.

One major weakness is the fact that many may doubt his ability to keep his house in order. The APC in Rivers is highly divided, however, the majority are on his side.

The former Lagos State governor appears to be the candidate to beat in this election. From Kano to Borno to Kwara, the list of States backing him has been impressive.

Unlike other aspirants, the Tinubu campaign team could be targeting the 1,162 votes, which is half of the 2,322 votes up for grab.

However, there is a mountain ahead of him. His outburst in Ogun State, where he made comments that many considered to be insulting to the president is one issue that could cost him the ticket.

It would be recalled that the national chairman of the party, Abdullahi Adamu warned that the party may take action against him.

There is also the challenge of aspirants from the South-west region refusing to back down. In the event of last minute alignment at the convention ground, the national leader may find himself holding the short end of the stick.

Although the president already told the aspirants to look for a candidate among themselves, however, any last-minute endorsement of any of the aspirants could change the swing of the election.

The concern on Muslim/Muslim ticket remains.

The Senate President may have to drop out of the race on the account of the action of the northern governors.

Interestingly, Ahmad’s candidacy was enjoying support from the South-east. Aside from the endorsement by Orji Uzor Kalu, some groups in the zone also pledged to support him.

However, beyond the regional consideration, Lawan’s candidacy failed to convince people in the party that he can win the general election.

Fayemi is only making the list because of his position as the Chairman of the Nigeria Governors’ Forum.

In the event that the governors decide to endorse one of their own, perhaps they will consider him.

His capacity to win at the general elections is very dim.