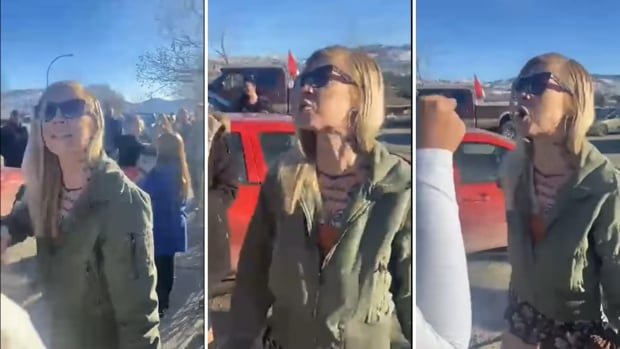 An anti-mandate protest outside a South Okanagan high school, which students say school officials and police failed to prevent, resulted in a verbal confrontation between adults and students and, in one case, a protester yelling a racially charged insult and profanity at a student.

The incident unfolded on Friday, Feb. 11 at Southern Okanagan Secondary School in Oliver, B.C., when a convoy of vehicles arrived, ostensibly to support student walkouts over mask mandates promoted by protest groups across the country.

About 10 students took part in the walkout, while approximately 20 adults who had participated in the convoy gathered on the road and sidewalk outside the school to protest, according to both RCMP and students who witnessed the event.

Grade 11 student Kai Allen says she and her classmates became aware of the protests around 2:15 p.m. PT, when the convoy, consisting of cars and trucks decorated with flags and anti-mandate slogans, arrived outside.

“We thought they were people coming to pick up their kids who just happened to have Canada flags,” she said. “But then there got to be more and more.”

Daybreak South12:41A student in the South Okanagan shares her account of her friend being verbally abused by an anti-health mandate protester on school property.

A student in the South Okanagan shares her account of her friend being verbally abused by an anti-health mandate protester on school property. 12:41

Around the same time, local RCMP received a call from an off-duty officer in the area who was concerned about the protest, and an officer was dispatched to the scene, says Sgt. Don Wrigglesworth.

Wrigglesworth says the officer informed protesters they were not allowed near school property under B.C.’s Access to Services COVID-19 Vaccination Act, where access roads within a 20-metre radius of hospitals, COVID-19 clinics and K-12 schools cannot be impeded or disrupted.

However, the protesters remained.

According to School District 53 superintendent Beverly Young, school staff saw both protesters and RCMP outside and believed the situation was under control.

However, at about 2:30 p.m. PT, the police officer was called away to a break-and-enter incident elsewhere in the area and left, Wrigglesworth said.

But Young says staff at the school weren’t aware of this, and believed police were outside when class was dismissed at 2:45 pm PT.

At this point, protesters had gathered near a designated pick-up area for parents, on a sidewalk adjacent to school grounds.

Allen says several students approached the protesters to find out why they were there, and the conversation turned into an argument about public safety measures.

Young says teachers tried to separate the protesters from students, but both she and RCMP confirm nobody called police.

After about 15 minutes, Allen says things turned “hostile” as one adult singled out a student of South Asian descent.

In a video filmed by another student, a woman identified by RCMP as Silke Schulze of Oliver, B.C., can be seen leaning toward the student and yelling, “I have a f—ing right to be in this country, do you?”

In a second video, Schulze calls the student an expletive and walks away.

“She was telling us we’re stupid and we’re like, ‘You’re literally arguing with children,'” Allen said.

According to RCMP, Schulze has been fined $2,300 under the Access to Services COVID-19 Vaccination Act.

But Allen questions why protesters were allowed to set up outside the school in the first place — while police were aware of the gathering.

“I think it was super irresponsible,” she said.

Young says it is her preference that neither students nor staff engage with protesters should they appear on school grounds and that it is better to avoid confrontation.

She also says she has debriefed with school staff and RCMP to establish better lines of communication.

When asked why students were allowed to leave the school when protesters were gathered outside, Young said she believes school staff had hoped things would remain peaceful.

“I don’t think they believed it would turn out like this,” she said.

Young adds the blame for the confrontation lands “squarely” on the people who organized the protest outside the school.