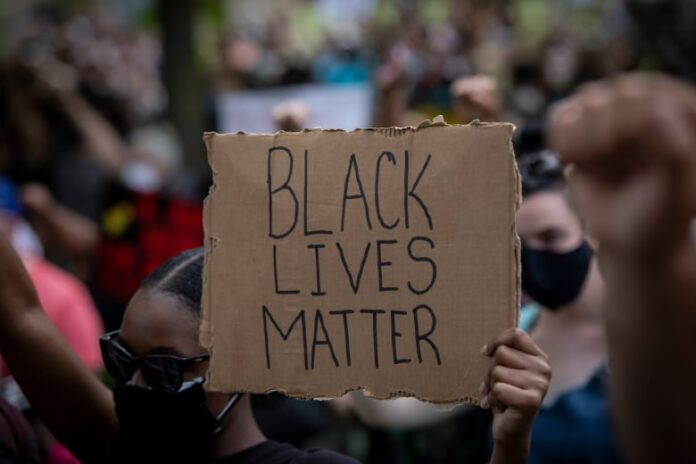 Canadians continued to rally and demonstrate against racism and police brutality on Saturday, a day after thousands attended protests and vigils across the country.

The demonstrations follow days of protests across the U.S. over the death of George Floyd, an unarmed black man, in Minneapolis, Minn. A police officer kneeled on Floyd’s neck for nearly nine minutes.

Many are calling for police reform and an end to systemic racism.

Amid the COVID-19 pandemic, Canada’s Chief Public Health Officer Dr. Theresa Tam on Friday urged demonstrators to “take care of themselves” and follow public health guidelines such as physical distancing as much as possible and using hand sanitizers.

Read on to see what’s happening around Canada.

Thousands demonstrated in two separate protests in Toronto against racism. The first protest began at Nathan Phillips Square, while the second began at Trinity Bellwoods Park.

Twanna Lewis, a Toronto resident at Trinity Bellwoods Park, said she was protesting for the first time on Saturday because she felt the need to take a stand for people who are voiceless. She has an 18-year-old black son, cousins, uncles and a brother.

“It’s 2020 and we need to be doing better,” Lewis told CBC Toronto. “It’s a shame that we have to be having this conversation in this day and age, when we think that we have gone so far.”

At Nathan Phillips Square, demonstrators chanted, held placards and posters, and listened to speakers. Then the protesters marched to the U.S. consulate and onward to Yonge-Dundas Square.

“I can’t breathe,” the crowd chanted at one point at Nathan Phillips Square, in a reference to some of Floyd’s last words before his death on May 25.

People held up signs that read “No Justice No Peace” and “Yes it’s here too Ford.” Ontario Premier Doug Ford had said Canada doesn’t have the “systemic, deep roots” of racism as the U.S.

Action for injustice group behind march through downtown: CBC’s Natalie Nanowski reports from the scene at Nathan Phillips Square 4:01

Also in Toronto, dozens of graffiti artists joined a “Paint the City Black” event in which an alleyway was painted with depictions of Floyd and other prominent black figures.

Jessey Pacho, an artist at the event, said the colour black was the main theme that ran through each individual piece as “a show of solidarity with the Black Lives Matter movement.”

Pacho said about 40 artists from around Canada participated.

Thousands of people kneeled on the lawn of Confederation Building in St. John’s during a rally in support of the Black Lives Matter.

The rally, organized by newly established Black Lives Matter NL, featured speeches and performances from members of the area’s black community sharing their own stories of racism.

Crowds were able to physically distance during the rally, spreading themselves across the lawn of Confederation Building. There was a small police presence, but no incidents were reported.

Zainab Jerrett, who came to Newfoundland in the 1990s and is a professor at Memorial University, was one of the speakers on stage and was overwhelmed by the public support.

“That shows that this problem is effecting everybody, and everyone wants to chip in to bring a solution,” Jerrett said. “I almost got emotional because there’s so many people … young people of all cultures in Newfoundland.”

“This is an awakening. The people are interested in listening to the black community” she added. “[But] we are all the same. The more we come together as a human race, the better.”

“I am almost speechless. I am about to cry,” she says. “I feel like I am a Newfoundlander in spirit and soul.” <br><br>The audience yells back at her “you are!” <a href=”https://t.co/rZXj08NvIT”>pic.twitter.com/rZXj08NvIT</a>

Hundreds of demonstrators marched in Yukon to protest anti-black and anti-Indigenous racism.

In Whitehorse, protesters marched from the totem on the city’s waterfront to the RCMP detachment, where they called out the names of Indigenous people who died in RCMP custody.

The Dakhká Khwáan Dancers performed in the middle of 4th Avenue.

“Brutality against racialized people, black people has been there for centuries,” said demonstrator Annie-Frédérique Pierre. “It is the basis of colonialism. And yes, black and Indigenous people living on Turtle Island are as impacted by brutality as their friends and family in the U.S.”

Protesters also stopped at the CBC building on 3rd Avenue to call for a more representative media that does a better job of covering racialized communities.

Elsewhere in the territory, at least 100 people marched along Front Street, chanting for justice and equality.

The names of people killed by police brutality echoed through Calgary’s Olympic Plaza, where thousands gathered for a candlelight vigil to mourn and honour victims of racist injustice and police violence.

While organizers mourned Floyd’s death, they also wanted to share an important message — racism and police violence are Canadian issues too. They called for policing reform and for police to collect data on actions taken against people of colour.

“My hopes are that people will become mobilized and start applying anti-racism in their day-to-day lives,” said Adora Nwofor, one of the organizers.

Gathering first in Victoria Park to listen to people speak about their experiences around being black, thousands took to the streets in downtown London, Ont.

Long after the larger group had gone home, drivers continued to honk and wave placards around downtown streets.

Tavia Legg said it was heartwarming to see how many Londoners came out to support the cause.

“I don’t see why we’re all judged by the colour of our skin. It just shouldn’t be allowed,” Legg said. “We’re all human beings.”

Volunteers handed out bottles of water and squirts of hand sanitizer to marchers in Guelph, Ont., as thousands of demonstrators descended upon city hall. Organizer took COVID-19 precautions after health officials urged protesters to adhere to public health protocols.

A similar demonstration in Kitchener on Wednesday saw thousands of people walk through the downtown core holding signs.