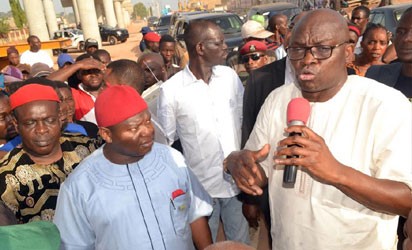 Chief Jonas Udeji, the founder of Ohaneze Ndigbo, a socio-cultural group in South Africa, says the stance of its national body not to boycott the Anambra governorship election is in order.

Nnamdi Kanu, the self proclaimed leader of the Indigenous People of Biafra (IPOB), had called for the boycott of the Nov. 18 election in Anambra.

But the National President of Ohaneze, John Nwodo, had addressed legislators in Anambra and told them to ignore the directive.

Udeji speaking in Johannesburg, South Africa, on Saturday said that Kanu was not qualified to give such a directive on behalf of Igbos.

“ Ohaneze Ndigbo remains the apex body of Igbos in Nigeria and world-wide.

“ No single individual will give any order on behalf of Igbos if that person is not the elected President of Ohaneze.

“ We understand Nnamdi Kanu`s emotions about the plight of Igbos in Nigeria. But, he should realise that we have a leader and that is Nwodo.

“ He is the one to speak on behalf of Igbos,” he said.

Udeji urged Anambra people and other South East states to ignore such directive from IPOB and elect their leaders when the opportunity comes.

According to him, Igbos should collectively decide on such sensitive issues under the leadership of Ohaneze, their apex body, and not based on an individual’s directive.

He said that Anambra people had the right to elect their governor and other representatives at the local government, state and national levels.

Udeji said that Ohaneze under Nwodo`s leadership had been focused and remained determined to achieve set goals and objectives.