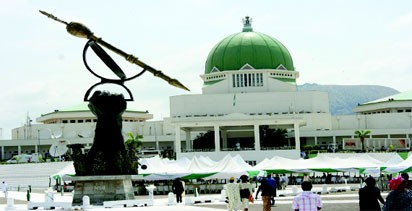 Anambra as oil producing state: Senate in rowdy session over status
It was a rowdy session yesterday on the floor of the Senate over the status of Anambra State as an oil producing area as three senators from three different states were engaged in exchange of words. The crisis followed a point of order by the chairman, Senate Committee on Anti-Corruption and Financial Crimes, Chukwuka Utazi, PDP, Enugu North who dismissed the claim by leader of a group of communities in oil producing states that Anambra had attained oil producing status, adding that the administration of former President Goodluck Jonathan, on August 30, 2012, recognised Anambra erroneously as an oil producing state. Utazi who quoted Vanguard report said, “As a result of that, it sparked off a lot of violent protests by people of Kogi and Enugu states who are part owners of these oil blocks – OPL 915, 916 and 917. And as a result of the violent protests from these two states, the Jonathan-led government called a meeting on October 31st, 2012, to resolve this issue.” Senate According to him, Jonathan then invited ex-governors Peter Obi (Anambra), Idris Wada (Kogi) and the then Deputy Governor of Enugu State, Sunday Onyebuchi to the meeting, adding, that “After looking at the issues concerning the ownership of these oil fields by the three states, they decided to withdraw the recognition they gave to Anambra and ordered the National Boundary Commission to wade into this issue, with a mandate to determine actually who owns what. Since then, NBC has been handling this matter.” Utazi also recalled that himself and Senator Stella Oduah (PDP, Anambra) had moved separate motions on the matter at the Senate, which were stood down to allow the commission to carry out the task. But reacting to Utazi, Senator Andy Uba (APC, Anambra) who came under another point of order, however accused his colleague of lying, adding, “If you recall, in 2013, I moved the motion for Anambra to be included in the oil-producing states. Then, the issue was that every state that wanted to become one must produce (at least) 120,000 barrels of oil (per day) before they would be included, and I know that Anambra has attained that. So, what my colleague is saying is not true.” He is lying.” While Uba was asked to withdraw the “lie” statement which he did, he insisted that “What he presented was not the correct thing.” Also raising another point of order, Senator Dino Melaye (APC, Kogi) claimed that the oil blocks belonged to Kogi State. In his remarks, Senate President, Bukola Saraki, referred the matter to the Senate Committee on Petroleum Upstream to report back in two weeks. Meanwhile, Senate President Bukola Saraki, yesterday refereed the 23 members for the National Population Commission, NPC nominees to the Senator Suleiman Hunkuyi, APC, Kaduna North led Senate Committee on National Identity and National Population for subsequent screening and confirmation. Saraki gave the committee two weeks to report back. The names of the commissioners are, Nwanne Nwabuisi from Abia State, Dr Chidi Ezeoke mni from Anambra state, Barrister Isa Audu Buratai (Borno state), Navy Captain Charles Iyam Ogwa ( Cross River ), Sir Richard Odibo ( Delta), Okereke Onuabuchi ( Ebonyi), Olusegun Aiyejina ( Edo) and Ejike Ezeh ( Enugu). Others are , Hon Abubakar Danburam ( Gombe), Prof Uba Nnabue ( Imo), Dr Abdulmalik Durunguwa (Kaduna), Suleiman Lawal ( Kano) , Prof Jimoh Habibat Isah ( Kogi), Dr Sa’adu Ayinla Alanamu (Kwara), Nasir Isa Kwarra ( Nasarawa) and Barrister Aliyu Datti ( Niger). Also on the list are Yeye (Mrs ) Seyi Olusanya (Ogun), Prince (Dr) Oladiran Iyantan (Ondo), Senator Mudashiru Hussain (Osun), Mrs Cecelia Dapoet ( Plateau), Dr Ipalibo MacDonald(Rivers) and Sale Saany from Taraba state .
Share
Facebook
Twitter
WhatsApp
Pinterest
Linkedin
ReddIt
Email
Print
Tumblr
Telegram
Mix
VK
Digg
LINE
Viber
Naver
Previous articleBank MD who bought 134 buses, 20 houses with N11.4 bn slush cash arrested by EFCC
Next articleAisha Buhari targets to save 3,277 women, 30,711 children lives in 1-yr