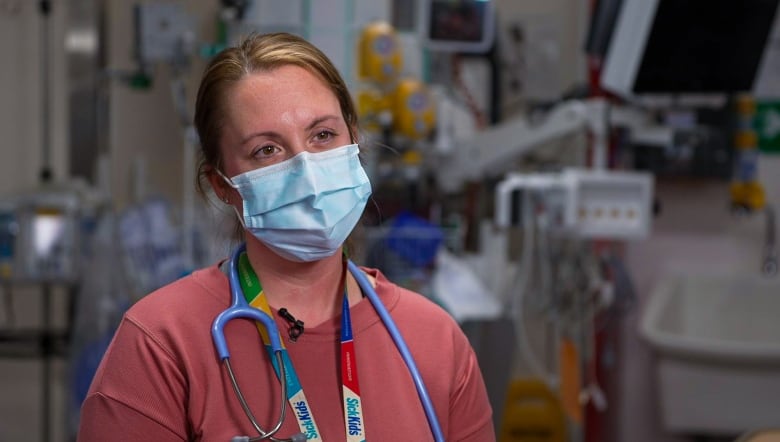 It’s the exhaustion on parents’ faces that hits you first.

CBC News got exclusive access to the emergency department and ICU at Toronto’s Hospital for Sick Children, Canada’s largest pediatric medical centre, as it and other hospitals across the country grapple with what one doctor called “a perfect storm” of COVID-19, flu and respiratory syncytial virus (RSV).

The stress of the recent surge is not only taking its toll on families. It’s also having an impact on staff, already depleted and worn down by three years of COVID-19. The long waits are creating tension and angry outbursts directed at nurses and others.

“I’ve been a nurse for about 12 years now and this is … by far been the most challenging year,” said Lindsay Stewart Leger, a charge nurse in the emergency department.

Harassment against health-care workers in Canada has been growing for years. A 2021 paper in the Canadian Medical Association Journal (CMAJ) called for action on escalating violence. It cited a 2017 survey in which 68 per cent of registered practical nurses and personal support workers reported experiencing violence on the job at least once that year.

At the front entrance to the SickKids emergency department, two security guards stand ready to deal with frustrated parents. Stewart Leger understands why the parents are frustrated but feels it’s a reality families have to expect and accept.

“Understand that just because you’re in line before someone else doesn’t mean you’re going to get seen before that child. There can be lots of reasons why we pull children out there, medical history, something subtle that we’re seeing that we’re not happy with or concerned about,” she said.

On a tour of the ER with division head Dr. Jason Fischer, the rooms are full and the sound of coughing and babies crying fill the hallway.

A mother, worn by fatigue, tries to rock her baby in a car seat. Others, in the waiting room, try to distract their children with games and colouring books.

Fischer describes what the hospital has been experiencing for weeks as “unprecedented.”

“It’s really been a perfect storm of different factors,”  he said.

Demand on some days has been so high that the hospital set up an overflow waiting area in the cafeteria. Doctors have also taken over the nearby orthopedic clinic to open up more beds for patients.

“This emergency department was designed for 65,999 visits a year. And this year, if we follow the trajectory, we’ll have over 90,000 visits,” Fischer said.

Data obtained from the hospital shows that between Oct. 3 and Nov. 7 there were 8,877 visits, a 21 per cent increase over the same time period three years ago. The average wait time in the emergency department was three times longer than in October 2019, with some patients waiting up to 12 hours.

For many parents, Fischer said, the hospital is a last resort in the face of drug shortages and lack of access to primary care physicians.

“I had a particular overnight shift when I remember this family and speaking to them and they were so apologetic in having to come to the emergency department, but they had tried to access care three different ways before coming.”

The ripple effect of this latest surge is being felt across the hospital.

Last week, SickKids announced it was cancelling non-urgent surgeries. Staff are being redeployed to the emergency department and the pediatric intensive care unit, which is completely full with the sickest children getting care.

“We’re in a situation now where these children with breathing problems or what we call respiratory failure are so voluminous … that the only way we can continue to provide these kids with life-threatening illnesses the care they need is to pull resources from elsewhere and that unfortunately requires these kinds of difficult decisions,” said Dr. Steven Schwartz, the hospital’s chief of critical care medicine.

“This is, to an extent … our COVID in pediatrics.”

In a nursing station adjoining the ICU, Schwartz meets with team members to discuss how to create more room for children waiting in the emergency department amid staff shortages.

“We have one room that has six flu patients so we’ve moved patients,” said Lee-Ann Williams, a registered nurse on the floor. “We have a patient that we’re holding in emerg that is on BiPap [a breathing machine] that needs to come. I don’t have a spot for that patient.”

“We’re doing our best to get those patients out so we can admit others,” said Jackie Hubbert, executive director of critical care services. “I’m a little bit handcuffed to be honest.”

Schwartz responds to her by saying help is coming from different parts of the hospital. But as SickKids and other pediatric centres across Canada are flooded by worried parents, there is a risk that a child may not be seen by doctors in time.

“What keeps us up at night is that some child who really needs our care is going to be stuck somewhere else and unable to get in here,” he said.

As the cold, flu, RSV and COVID-19 season kicks into high gear, the doctors and staff at SickKids hope pharmacy shelves will soon be filled with Tylenol and other medicine to help children. But in order to keep the hospital for those who need it most, Schwartz said it’s important to be fully vaccinated and wear masks in crowded situations.

“Anything we can do to decrease the spread of these diseases in the community is a help to us, but more importantly, it’s a help to your child.”