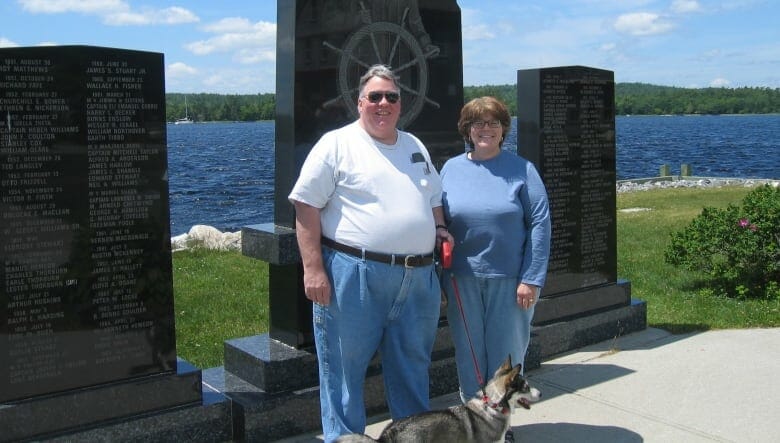 An American couple who found peace in a small, seaside Nova Scotia town will continue serving the community for years to come.

“They loved people,” Tom, Tim’s twin brother, said in a recent interview from his home in Easton, Md.

“They moved to a new country, to a small town, and they didn’t just kind of lock themselves up in a house. They went out and met the community and made it their own.”

Work in the auto industry as an engineer brought Tim to lots of international destinations, such as Germany and Japan, Tom said.

As a couple, Tim and Diane loved exploring the world. They came across Liverpool on a journey to Nova Scotia in the 1990s on a drive along the South Shore and fell in love with the area.

The Ledvinas started vacationing there and eventually decided to start building their “forever home” on nearby Western Head in 2005.

“I don’t think that they went searching for Liverpool,” Tom said. “They just felt at home. They felt at peace.”

Both Tim and Diane, animal lovers who raised miniature donkeys at their earlier home in New York, volunteered with the SPCA in Liverpool.

Volunteering was the way they both integrated into the community, Tom said, with Tim becoming very active with groups like the Kiwanis Club, Diane the local library, and both attending St. Gregory’s Church.

A health check as part of the immigration process of moving to Canada revealed that Diane had cancer. She eventually passed away in March of 2012, but during those years the Ledvinas felt supported and well cared for at the Queens hospital, Tom said.

They both appreciated having the ease of Tim being able to visit the hospital regularly, rather than having to travel to larger centres like Bridgewater or Halifax.

Although Tom said he was initially surprised Tim and Diane wanted to spend their retirement in Nova Scotia away from family, once he visited after Diane’s death he realized how much friendship and warmth his brother was experiencing.

“That was instructive to me because I was preparing for retirement myself … and that taught me how to go about it,” Tom said. “Tim had all the support he needed right there.”

Tim remained in Liverpool until he became ill himself a few years later. He died in 2015.

Tom recalled his brother talking with him about how he wanted his donation to be put to good use, and how essential the hospital was to the community.

The financial gift was left with no strings attached, allowing the foundation to decide how best to use the funds. Due to the nature of cross-border legal issues and red tape, Tom said getting the money into the foundation’s bank account took longer than expected, but most was delivered last year.

“They gave back to the community in a big way. And we just are so grateful and appreciative of that,” said Al Doucet, chair of the hospital foundation and retired Liverpool doctor.

The money is being used to refurbish an old doctor’s office that Doucet once used, just across the parking lot from the hospital, which currently houses a dentist and COVID-19 testing centre.

Eventually, clinical services like mental health will move into the building, giving patients their own entrance and saving them from having to come through the hospital itself, Doucet said. It also creates more room for doctors and nurse practitioners in the hospital to expand their own practices.

The building now bears the Ledvina name, which Tom said is a thoughtful touch but not something Tim would have looked for.

His brother’s generosity and legacy has Tom reflecting on their years in a Jesuit high school, where the theme of “service to others” was instilled into them.

“They both had an opportunity to serve and they both delighted in being able to do that,” Tom said. “This is their continuing to serve.”