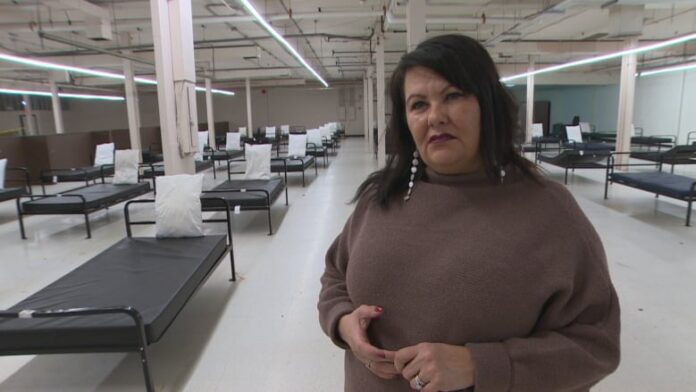 Alleged serial killer Jeremy Skibicki frequented soup kitchens and homeless shelters in Winnipeg’s inner city, meeting women whom he would take home to his apartment, according to numerous sources.

The 35-year-old is charged with first-degree murder in the deaths of Morgan Harris, Marcedes Myran, Rebecca Contois and a fourth woman who, until she is identified, has been given the name Mashkode Bizhiki’ikwe, or Buffalo Woman.

Skibicki’s lawyer says his client intends to plead not guilty on all counts.

The three identified women — Harris, Myran and Contois — used shelters on and around Main Street, sources who work in and use shelters told CBC News.

They say they believe Skibicki was preying on vulnerable women at those shelters.

Cora Morgan, the First Nations family advocate with the Assembly of Manitoba Chiefs, says it’s well known among staff in Winnipeg shelters that Skibicki accessed a variety of shelters and met women there.

He was known to frequent N’Dinawemak, a 24/7 warming space and shelter in the South Point Douglas area, according to Morgan. Police visited that Disraeli Freeway shelter looking for him earlier this year, she said.

“People shouldn’t have the ability to prey on our women, or our people in general,” she said.

“When you look at our population of people that we serve, they’re very vulnerable. They don’t have what the rest of Manitobans have or Canadians have,” said Morgan, who speaks on behalf of the Indigenous-led N’Dinawemak.

“When you lose people that you care for it’s very difficult, and it’s hard to keep doing it day after day, when the bigger-picture things aren’t happening to change people’s realities.”

One man said he ate meals with Skibicki at N’Dinawemak over a two- to three-month period earlier this year.

He said he regularly ate lunch and breakfast with Skibicki, who was known as someone who ate meals at various homeless shelters despite having a place of his own, the man said.

“I was speechless” after finding out about Skibicki’s arrest, said the man. CBC is not naming him because he does not want his family to know he’s living homeless.

“It was very disheartening.”

He said he believes the women likely went home with Skibicki out of desperation for shelter, drugs or warmth.

“But the problem is there’s no recourse. There’s nobody watching,” he said.

Another person who also uses N’Dinawemak said Myran, Contois and Harris frequented that shelter and others in the area for meals and a warm place to sleep at night.

She described Myran as a good friend.

“I was searching for quite a few of them before [police] found them,” said Ruth Roulette.

Skibicki met his now-estranged wife, who is Métis, at Siloam Mission in February 2018, according to the woman’s mother.

CBC is not naming the woman, or her mother, because she is a victim of abuse.

The mother said homeless shelters are used by the most vulnerable women in society, like her daughter was at the time.

“They’re nothing but a predator’s playground,” the mother said. “There’s no protection for those girls in those places.”

CBC spoke with a friend of Skibicki’s, who spent time with him at the McKay Avenue apartment Skibicki moved into in October 2021, and where he lived until his arrest on May 18, 2022.

The man said during that time, Skibicki would take the bus daily to N’Dinawemak for breakfast and lunch, and would often go to Siloam Mission for dinner.

Skibicki didn’t own a car and didn’t have a job. His rent was covered by employment and income assistance, said the man, whom CBC is not identifying because he fears retribution for speaking publicly.

During the time Skibicki lived at the apartment, the man saw about half a dozen women he believes were Indigenous come and go, though Skibicki told him he’d had at least 30 women stay with him for varying periods of time.

The source said he didn’t understand the dynamic between Skibicki and the women he had over.

The women were often carrying bags with what appeared to be clothing and other belongings, he said. He’d also often see drug paraphernalia in Skibicki’s apartment after the women left.

He remembers Skibicki telling him about meeting one woman who had been in line at Siloam Mission but had been denied entry to the shelter.

“He’d have his container of soup that he brings home [from the shelter] and he’d offer accommodation to take these girls home. I never thought much of it,” said the source.

“Now that I look back, it’s predatory behaviour,” he said. “You know, he’s looking for the absolute most vulnerable.”

While he saw the women come and go from Skibicki’s apartment, the source said he never spoke to them.

“He wouldn’t even want me looking at his women,” he said. “He was very protective of his women like that.”

But the source says he has mixed feelings on the allegation that Skibicki was specifically targeting homeless Indigenous women.

“I just feel that’s the type of people that would associate with him. Being on government assistance and living with a budget of $150 a month, that’s not far off from being homeless, income-wise.”

Cora Morgan said the unsheltered community has been shaken by the news of the killings of the four women.

“There’s a lot of trauma here. And so it’s really difficult to ask people to come to work every day, because it’s not easy,” she said, adding many women from the homeless community have gone missing.

Most women who access N’Dinawemak have been through the child welfare system and have been affected intergenerationally by residential schools, said Morgan.

Most have also experienced abuse and have connections with missing or murdered Indigenous women and girls, she said.

“It feels really terrible that somebody might have been using spaces that are designed to help and love people to [instead] harm people,” she said.

“It definitely breaks our heart.”

Society needs to prevent violence by making sure people have basic necessities, including housing, “so they’re not looking for other avenues and having to make that choice between a cold night on the street and risking their personal safety,” she said.

Siloam Mission plans to train staff on how to better recognize predatory behaviour. It also plans to increase women-only drop-in times, so staff can better connect with women and bring in more programming for them.

Morgan said N’dinawemak has increased searches around its building for any signs of predatory behaviour, and people using the services are being connected with a “point person” to whom they can disclose any issues.

Anyone known to be predatory or abusive toward women is banned from the centre.

N’dinawemak is also hearing from many concerned families who believe their relative may be Buffalo Woman, she said.

The Assembly of Manitoba Chiefs has repeatedly asked the federal government for funding to keep a database of missing Indigenous people in the province, which could link to all homeless shelters to better track people, but that funding has been denied, said Morgan.

“We keep getting these promises of change, and that change really needs to come, because we can’t just keep acknowledging loss of life,” she said.

Outside N’dinawemak, Ruth Roulette said she lines up each day in hopes of getting a bed for the night, but she worries for her own safety.

She understands why women might be motivated to go with someone in a potentially unsafe situation.

“Especially when you’re cold … [it’s] better than being out here,” she said.

The man who used to sit beside Skibicki at meals agreed, saying he’s had to start over again dozens of times in the past year after having his belongings stolen.

“The desperation is so substantial. People will do what they have to do to feel some sort of security or some sort of safety,” he said.

“It’s that old adage … when you have nothing, anything will do.”