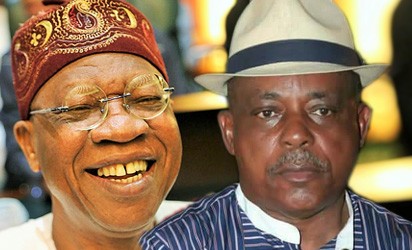 Erstwhile National Publicity Secretary of the Peoples Democratic Party, PDP, Chief Olisa Metuh, has opened up on his listing among “treasury looters” by the Federal Government, saying the administration, by the action, had resorted to subjecting him to double trial, in the media and in the courts. Lai Mohammed and Peoples Democratic Party, PDP, Chairman, Prince Uche Secondus Saying the government’s resort was despite the fact that neither President Goodluck Jonathan, who authorised the release of N400 million to him, nor erstwhile National Security Adviser (NSA), Col. Sambo Dasuki, who effected the release, had been interviewed about the release to him. He said the release of the list was the latest strategy of a dirty campaign by the administration to demonise him in the face of the weakness of the case as bureaucrats in the Office of the NSA had said the N400 million was transferred to him through due process. He said the All Progressives Congress, APC, had become panicky in the face of difficulties in government as he noted that the APC administration was now determined to demonise the PDP to ensure that there was no effective opposition ahead of the 2019 general elections. Meanwhile, the National Chairman of the PDP, Prince Uche Secondus, has given the Minister of Information and Culture, Alhaji Lai Mohammed, 48 hours to withdraw his being listed on the alleged looters’ list. According to a statement from his media office, Secondus, through his lawyer, Emeka Etiaba, is asking for N1.5 billion and public apology from the minister. The statement quoted the latter as asking Mohammed to note that if he failed to meet the demand after 48 hours, “We shall within 72 hours from today, proceed to a court of competent jurisdiction to ventilate our clients right under the law and shall further seek the protection of the court against you”. More so the Peoples Democratic Party (PDP) has also said President Muhammadu Buhari has no moral rectitude to fight corruption, “being a direct beneficiary of the corruption freebies deployed by his party leaders to fund his 2015 presidential campaign.” The party said the President, who declared that he had no resources to run a presidential campaign in 2015, ought to have known, particularly as a leader, that the billions of naira deployed for his campaigns were proceeds of corrupt activities of known All Progressives Congress (APC) governors and leaders. The party further challenged Buhari to make open the sources of fund available to his campaign in the 2003, 2007 and 2011 race as well as the names of the donors. The PDP said it is particularly interested in the fund allegedly provided by a South-south governor for the 2011 presidential election as well as how the cost of litigation was paid by then Buhari Campaign. The PDP, in a statement signed by its National Publicity Secretary, Kola Ologbondiyan yesterday said the APC and the federal Government cannot list names of looters and attempt to shy away from the fact that President Buhari and his party are direct beneficiaries of fund looted by APC governors. The party said President Buhari and his party leaders have huge confessions to make on how they raked in state stolen resources to prosecute elections of 2015. “If the federal government and the APC are serious about fighting corruption and not just out to persecute PDP members, they should have began with the probe into the source of the billions of naira used for President Buhari’s 2015 presidential campaigns, particularly in the face of allegations that the fund was looted from treasuries of various APC states. “The PDP ask: Can President Buhari in all honesty claim ignorance of reports in the open media that a South-South governor looted several billions from his state accounts and diverted the sums into Buhari’s 2015 campaigns? “Can the Presidency and the APC inform Nigerians what steps the federal government has taken to investigate this allegation, which has been in public domain and to clarify their roles as beneficiaries of the alleged looted funds? “If they are not complicit, why are they not demanding the truth in the matter and the possible refund of the fund for the good of the people? “We challenge President Buhari to tell Nigerians what he has done regarding the leaked memo showing N9 trillion ($25billion dollars) corrupt oil contracts at the NNPC as well as the alleged stealing of N1.1 trillion worth of crude oil, all in a sector under his direct purview as minister of Petroleum. “The Presidency should tell Nigerians what has been done to recover the stolen N18 billion Internally Displaced Persons (IDPs) intervention fund and the N10 billion National Health Insurance Scheme (NHIS) fund alleged to have been stolen from the Treasury Single Account (TSA) by APC officials and Presidency cabal. “Furthermore, the Buhari Presidency must immediately explain why it has been providing cover for the cabinet minister reported to have bought a property worth N280 million in Abuja from corrupt enrichment,” the statement read.
Share
Facebook
Twitter
WhatsApp
Pinterest
Linkedin
ReddIt
Email
Print
Tumblr
Telegram
Mix
VK
Digg
LINE
Viber
Naver
Previous articlePhotos: Singer Jidenna lands in Nigeria surrounded by heavy security
Next articleJacob Zuma might be the next African president to receive the Mugabe treatment