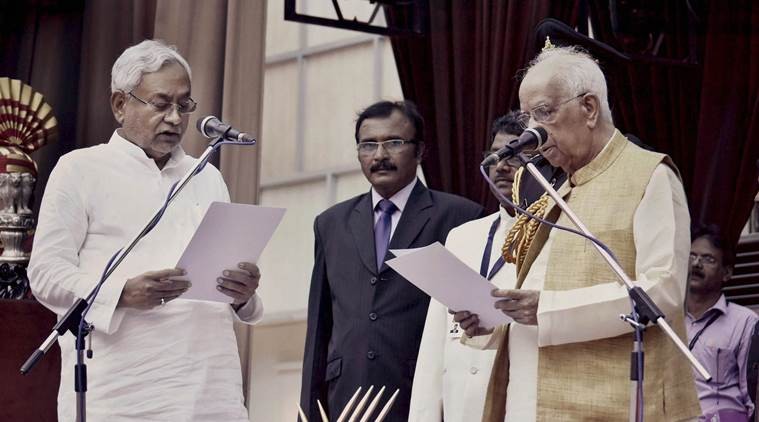 In the last one week, Bihar has seen high political drama. Nitish Kumar resigned as the Chief Minister of the state on the evening of Wednesday, July 26, stating that his decision was in the interest of Bihar. Citing corruption charges against his then deputy and leader of Rashtriya Janata Dal (RJD) Tejashwi Yadav as the reason behind his resignation, he joined hands with Bharatiya Janata Party (BJP) the same evening, and returned to the NDA fold. The Mahagathbandhan or Grand Alliance of Bihar between Janata Dal (United), RJD and Congress thus lay in tatters.

Here is everything that has happened since:

After taking oath as the CM of Bihar, Nitish was asked by the Governor to prove his majority in the Bihar Assembly by taking a trust vote within two days. Leaders of RJD had alleged that Nitish had wrongfully been called upon to form the government. While Nitish submitted a list of 132 MLAs to the Governor, who he said would be lending him support in the Assembly, RJD members claimed that they had the numbers to win the trust vote.

Rifts between JD(U) emerged on Nitish’s decision to return to NDA. JD(U) MP Ali Anwar said on Thursday, “Though Nitish ji’s decision to form a government with BJP was his call of conscience, my conscience doesn’t allow me to support this move.” Kerala JD(U) president Veerendra Kumar and Ali Anwar met senior leader Sharad Yadav to express their displeasure.

On Friday morning, just before the trust vote, MLAs of RJD protested against Nitish outside the Bihar Assembly. Shouting slogans and carrying placards, the MLAs were also joined by Tejashwi Yadav. He accused Nitish Kumar of cheating the people of Bihar and called him “Chief Minister of Rashtriya Swayamsevak Sangh (RSS)”.

Inside the Assembly, Tejashwi Yadav accused Nitish of using him as a pawn and said that it was all a pre-planned conspiracy. Yadav said Nititsh had joined hands with the killers of Mahatma Gandhi. He questioned Nitish’s ideology and principles. “Yogi Adityanath and some BJP leaders have serious cases registered against them, will you ask all of them to resign,” he said to the CM.

The CM then addressed the assembly and said, “Secularism should not be used to justify corruption. I won’t support people who make money through wrong ways.” He said the government of Bihar will continue to serve its people but will not tolerate corruption and injustice.

CM Nitish Kumar won the trust vote with 131 votes in his favour.

The Bihar cabinet saw an expansion Saturday with 27 new ministers taking oath of office at the Raj Bhawan in Patna. Nitish incorporated 14 JD(U) MLAs, 12 BJP MLAs and one LJP MLA in the new state government. While Nitish kept the Home Ministry to himself, Sushil Kumar Modi got Finance and Commerce Ministries.

Four days after he returned to the NDA fold, Nitish addressed his first press conference on Monday, where he said he was sure of the decision he had taken. Once a critic of the PM, he also said the PM Modi faces “no challenger” in the 2019 Lok Sabha elections.

“I had always been in favour of Opposition unity but made it clear that I could be a partner, not a follower. The Opposition has no idea, only a reactive agenda,” he said.

After keeping silent throughout the last week when the political drama unfolded in Bihar, Sharad Yadav finally broke his silence on Monday and expressed anguish at the fall of the Grand Alliance.

“The situation that has unfolded now is very unpleasant. Bihar’s 11-crore voters had given a mandate to the alliance based on the agreement between us. I am anguished at the fall of the alliance. The agreement reached with people at the time of elections is the biggest commitment of all. The alliance should not have broken. I am very sad about the fall of this alliance,” he told reporters.

While Yadav did not reveal his next course of action, leaders close to him indicated that he would address a meeting of Opposition parties in Delhi before the JD(U)’s national executive in Patna on August 19.