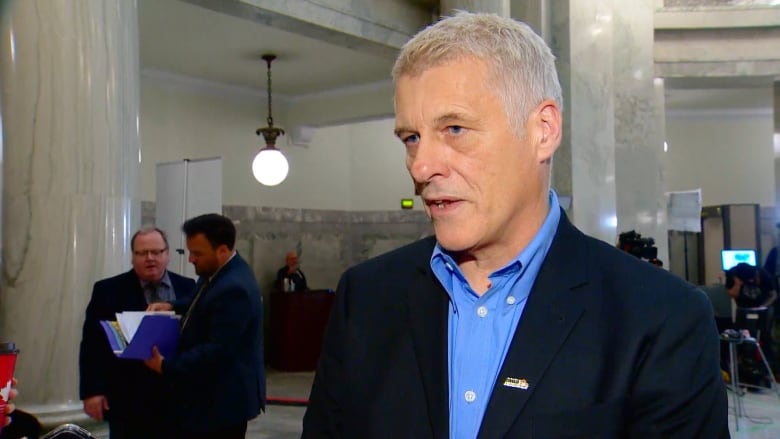 A new program that will pay some frontline workers $1,200 for risking their health during the COVID-19 pandemic is leaving some employees and unions frustrated as they puzzle over who is eligible for the cash.

The $465-million critical workers benefit, announced Wednesday, is a federal-provincial effort aimed at recognizing the occupational risks assumed by 380,000 workers in health care, social services and education as COVID-19 surged through a second wave in Alberta.

Private-sector workers who kept food supplies moving, warehouses stocked and gasoline flowing will also qualify, if they earn less than $25 an hour and their employer applies for the funding.

However, there was confusion among some workers as they tried to understand if they were eligible.

“Nothing like driving a wedge into the working-class folks that are out there trying to save lives every day,” said a frustrated Mike Parker on Thursday. The president of the Health Sciences Association of Alberta (HSAA) says the union was inundated with phone calls and emails from confused members.

The Alberta government gave some examples of health-care professionals who would qualify for the benefit, including nurses, respiratory therapists, and health facility cleaning and food services staff.

However, the HSAA represents workers in 240 professions, Parker said. He has no idea which ones will be eligible.

Parker said he is upset the provincial government didn’t consult with labour groups before deciding which  professions should qualify.

“You show me the folks that are truly in it, on the front lines, that wear PPE masks from start to finish, that have bleeding hands from washing every day and blisters on their faces from masks? These are the people I would talk about,” he said.

Frontline workers like paramedics and lab technicians drawing blood appear to be excluded, he said.

He said government employees appear to be completely excluded from the program. This would include workers who interacted with people throughout the pandemic, including correctional officers, social workers, sheriffs, court and unemployment program workers.

Similar programs in B.C. and Ontario gave the pandemic pay to correctional workers.

Jails have been the sites of several COVID-19 outbreaks in Alberta. As of Thursday, five correctional centres run by the province and the federally run Edmonton Institution had outbreaks.

A Fort Saskatchewan correctional officer also died from COVID-19, although it’s unclear if he was infected at work.

To be eligible for the benefit, workers must have logged at least 300 hours on the job between Oct. 12 and Jan. 31. Smith said that’s also creating confusion. He wants to know whether a worker who missed work because they were in isolation would lose out on the benefit because their hours dipped below 300.

“It felt like it was cobbled together very quickly,” he said of the program. “It looks like a government that is trying to deflect from other issues.”

Teachers left out of benefit

About 36,000 education workers, including administrative assistants, bus drivers, school caretakers and educational assistants will qualify for the benefit. Many of those workers were also laid off in spring 2020 when schools closed to students.

Alberta Teachers’ Association president Jason Schilling said he was happy to see them included, but wants to know why teachers were left out — especially substitute teachers.

Subs have been in high demand as COVID-19 cases in schools pushed dozens or hundreds of people into isolation for weeks at a time. While many teachers stay in a cohort with their class, substitutes move between classes and buildings, putting them at a higher risk of exposure, Schilling said.

Like Smith and Parker, he wishes government had consulted his association first.

“I don’t want to see workers, public and private, being pitted against one another because we’re all doing the very best work that we can,” he said.

Maeghan Heck, president of the Calgary Dental Assistants Association, is frustrated by what she says is an artificial distinction between public and private health-care workers.

Not only is she working up close in patients’ faces, Heck said she’s exposed to anywhere between 40-to-60 people per day in the clinic.

Yet, private sector health-care workers who earn more than $25 an hour will be ineligible for the benefit. Most dental assistants earn higher wages once they have more experience, she said.

Public sector health-care workers who will receive the benefit are not subject to the same wage cap.

“It’s completely disappointing,” she said. “We’ve sort of been forgotten about in the pandemic all along.”

The goal of the program was to target the benefits to some of the lowest wage earners on the front lines, Diane Carter, a spokesperson for the labour and immigration minister, said in an email.

A detailed list of eligible professions will be made public next Wednesday, she said.

“Alberta needed to design a program that met our province’s specific needs,” she said. “The pandemic is ongoing and Alberta’s government took a thoughtful and measured approach to recognizing the hard work and dedication of staff across a wide array of sectors.”

Alberta’s program covers the broadest group of education support workers of all provinces, she said.

For private employers applying for the funding, the government intends to approve every eligible application, Carter said. Application guidelines will also be published on Feb. 17.