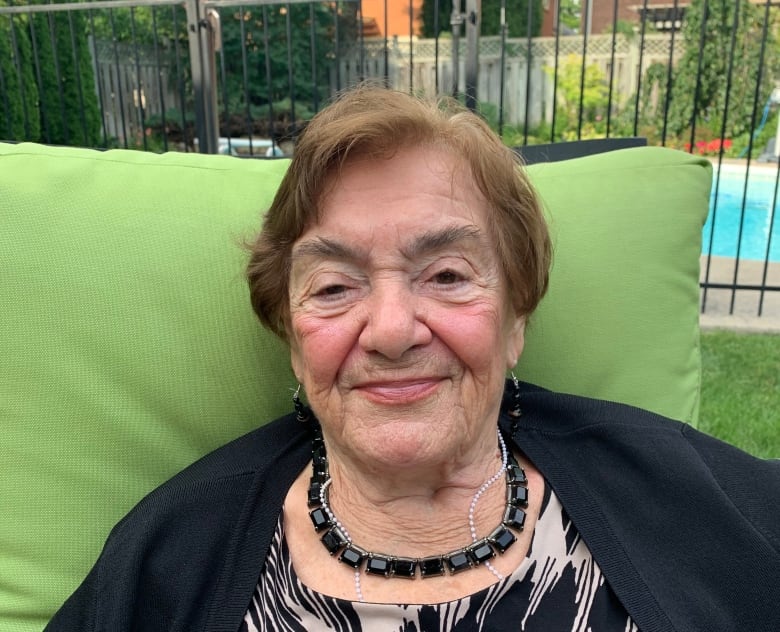 Even though Susan Asa-Katz’s mother is fully vaccinated against COVID-19, the 92-year-old spent last week isolated in her room after unvaccinated staff at her Thornhill, Ont., retirement home contracted the virus.

A variant of concern was detected among two workers, which led to an outbreak at Amica Thornhill in the Toronto area. At the direction of York Region Public Health, all 140 residents were told to isolate in their rooms for two weeks.

“It’s inhumane. We shouldn’t be doing that to people that are in the last years of their lives,” Asa-Katz said.

Now, she and other family members are calling on the Ontario government to mandate long-term care and retirement workers be vaccinated.

After residents at the home were vaccinated, they were allowed to socialize, eat in the dining hall and visit family outside, but after the outbreak, they couldn’t leave their rooms.

So, Asa-Katz stood outside the home and spoke to her mother on the phone, just to be closer. She said her mom goes through bouts of depression when she’s not able to interact with others.

“When she’s been locked down, she’s called me and said, ‘Why do I have to be here? Why can’t I join your dad [who has died]?'” she said through tears.

WATCH | Families share their concerns while their loved ones were in isolation:

Family members of residents at Amica Thornhill say they want the Ontario government to mandate vaccines for staff after unvaccinated workers contracted COVID-19. 0:50

Even with the high vaccination rate among residents, long-term care and retirement homes continue to follow provincial guidance on outbreaks put in place prior to vaccine availability, which can include isolating residents and cancelling non-essential visits and activities.

Family members and Amica Thornhill asked public health to relax some restrictions on residents. About a week into the outbreak, it did. Now, just three residents have to stay in their rooms because they’re not fully vaccinated. The others have resumed outdoor visits and can participate in hallway programming while distanced and masked, but they still have to eat alone in their rooms.

Families say it’s an improvement, but they’re still concerned about the current and future restrictions.

“All we need is somebody else to come down [with COVID-19] again and then they’re going to go back into lockdown,” Asa-Katz said.

She and other family members say mandated vaccines would prevent that.

“I believe that if you’re working in a health care setting and you’re taking care of people and that’s the job that you signed up to do in life, you should absolutely 100 per cent be vaccinated,” said Josh Horowitz, whose grandmother lives at Amica Thornhill.

“It’s not like a medication or wearing a protective mask,” she said. “It’s a procedure.”

The Ministry of Health said it won’t impose a mandate, but continues to encourage all staff to get the shot.

At Amica Thornhill, 99 per cent of residents have received their first vaccine dose and 97 per cent have got their second. As for staff, 83 per cent got their first jab and 74 per cent are fully vaccinated, though more have signed up.

Horowitz said his grandmother’s mental and physical health has deteriorated due to cancelled activities and visits.

“They were promised that as soon as they’re vaccinated life will get back to normal for them and they’ve just been lied to.”

In Ontario, 74 per cent of long-term care staff have received their first dose of a COVID-19 vaccine, compared to 98 per cent of residents, according to the Ministry of Long-Term Care.

The Ministry for Seniors and Accessibility says more than 97 per cent of retirement home residents got their first shot. The Ministry of Health didn’t provide the number of retirement staff who’ve been vaccinated before publication.

“The good news is that fortunately, it doesn’t seem to be penetrating into the residents,” he told CBC Toronto.

Fullerton said even though residents are vaccinated, it’s about balancing risk. She points to outbreaks in B.C. long-term care homes where fully-vaccinated residents still contracted the virus, albeit their symptoms were more mild and transmission less aggressive.

“This virus has the ability to outpace us sometimes and we’ve got to be vigilant and cautious,” she said.

“Despite the fact that they have been immunized, they may not be totally protected,” Dr. Kurji said of residents. “I think the next few weeks will tell us more once we learn a bit more with respect to the behaviour of the variant.”

Amica Thornhill said since vaccines were made available to staff in December, four fully-unvaccinated workers have tested positive.

The two staff members who spurred the outbreak chose not to get vaccinated at first, but changed their minds, said Amica Thornhill. They became ill before their scheduled vaccination.

As of March 24, two staff members and zero residents have COVID-19.

Amica said it continues to run a vaccine education campaign for staff who are hesitant.

When it comes to influenza, some of the largest long-term care and retirement facilities in Ontario, including Chartwell and Sienna Living, don’t allow staff without a flu vaccine to work with residents during an outbreak.

They’re only allowed back after the outbreak is over, or if they’ve taken an oral antiviral medication like Tamiflu, which is used to treat and prevent influenza.

The directive is recommended, but not mandated by the long-term care ministry.

At present, there is no oral medication to protect against COVID-19.

“We have a moral obligation not to infect people and not make people sick,” she said. “I think patients have a reasonable expectation that they and their loved ones will be safe in health-care facilities.”

Cara Zwibel, a lawyer with the Canadian Civil Liberties Association, said an argument can be made that mandating vaccines is a violation of the Canadian Charter of Rights and Freedoms.

“[It’s] a form of mandating medical treatment. And that is an extraordinary thing to do,” she said.

An article published last month in the Canadian Medical Association Journal argues it’s legally permissible to mandate health-care staff be vaccinated as a condition of work, with some exceptions.

“If you chose not to be vaccinated, then [our findings say] you’d have to be put in a part of the workplace where you were not in front of patients, or you’d have to just take those days off work during an outbreak,” said co-author Bryan Thomas, a senior research associate with the Centre for Health Law, Policy and Ethics at the University of Ottawa.